Paleostone count the benefits of the Dual Power Spaleck Screen

One such miner in the Northern Cape has done exactly that by employing advanced technology in a dual powered mobile screen that brings many advantages.

Lyndon de Meillon studied geology and earned a Master’s Degree in the discipline before turning to exploration, consulting and ultimately, alluvial diamond mining at his own risk. By his own admission, he learnt many things along the way and one of them was that those diamonds that pay the rent with true value are the ones that are larger than two carats.

But he also learnt that to get to those size stones effectively, one has to eliminate the bulk of what the Northern Cape’s diamond-bearing gravels present and that is sand.

“Sand is a killer and takes its toll on equipment, fuel and time,” Lyndon says. “In the area where we’re currently mining on the banks of the Riet River near Ritchie, south of Kimberley, there is a lot of clay, shale and sand, of which the latter often makes up 60% of the run-of-mine material.”

The sand must be effectively dealt with as early as possible in the processing sequence to avoid double handling, which adds to production costs. Lyndon and his company, Paleostone Mining, had enjoyed good results with in-pit screening technology provided by Finlay Screens as he explains.

“Because Finlay Screens are now distributed and maintained by Bell Equipment, we’ve had sound advice from the company’s Sales Representative, Eric van der Merwe, on which specific models would be best for our application. Eric is very knowledgeable having firsthand experience of the alluvial diamond mining industry.”

With this reliable advice, Lyndon first bought a Finlay 893 Screen in 2016 and when that machine needed replacing, he bought a slightly smaller Finlay 883+ Screen in March 2017.

“The Finlay Screens have worked so well for us and form the core of our mining operation as we can separate the oversized material out at the start of the process,” Lyndon explains. “The Finlay 883+ Screen has been used mainly as a scalping station and we soon realised that we needed to address the very real sand problem that occurs daily.”

Again, with advice from Eric van der Merwe, Paleostone Mining acquired a Dual Power Finlay 693 Spaleck Screen in January 2018 and installed it to run in tandem with the Finlay 883+ Screen.

“This Dual Power Finlay 693 Spaleck Screen has been remarkable, and we’ve seen the benefits it brings to our operation from the outset,” Lyndon says. “First of all, the flip-flow design of the multi-decked screen handles wet and dry material much better and gets rid of the sand, which we then don’t need to haul all the way back to the pit from our plant, meaning double handling.”

Lyndon explains further that removing 60% sand in a given batch of processed ore, equates to one-and-a-half less truck loads of material that needs to get hauled to the pans, an obvious cost-saving. Downstream benefits include smaller slimes dams that impact the environment less and the sand that is taken out earlier in the process can be distributed over the oversized material in the continuous rehabilitation that follows mining.

The Finlay 693 Dual Power Spaleck Screen uses polyurethane mats, which have proved to last longer than wire mesh mats. Made in Germany, the mats are fitted in small sections so that when one section wears out, only that section gets replaced.

“I should also mention the dual power feature, which is a major benefit of the Finlay 693 Dual Power Spaleck Screen,” he says. “You will appreciate that diesel fuel costs make up the biggest production cost factor for us and having the ability to then switch to electrical power where available is a major plus as electricity charges are but a fraction of diesel fuel charges.”

“The real benefit of this Finlay 693 Dual Power Spaleck Screen can be found in the quality of the higher value product we send to our pans, with the sand removed. We may be getting fewer stones but those we do find, have a higher value per carat and that means we’ve achieved our goal.” 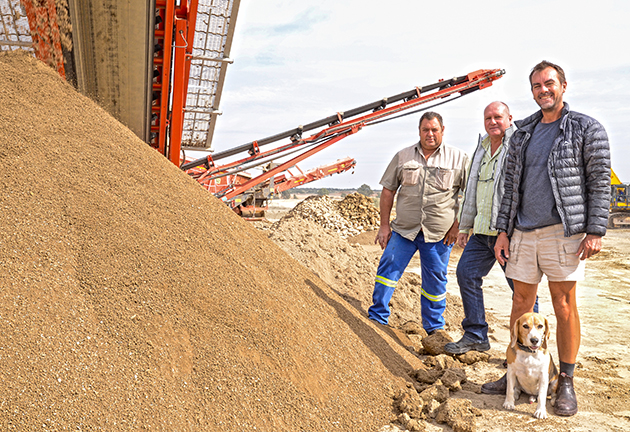 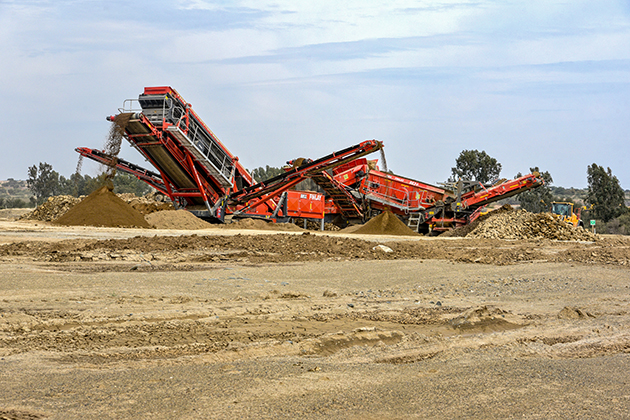