The recent crippling drought in the Western Cape’s agricultural sector has seen many farmers take a second look at the value of cleaning irrigation canals, drainage ditches and water courses to make every drop of water count.

This has brought about a rethink on the size of digging and loading tools and has forced an experienced operator in plant and machinery to really think out of the proverbial box.

Tommie van Niekerk had, early in 2018, left a position as plant manager of a large plant hire company in Cape Town after 18 years of loyal service. He had for a while felt the urge to be self-employed and, along with two partners, founded Neheto Plant, a name derived from the first two letters of the partners’ names.

“The first thing we did was buy two Bell 315SL Tractor Loader Backhoes (TLBs) to give our operations momentum as I know from past experience that this is a versatile and sought-after machine in the local plant hire industry, whether it be in civil construction or the agricultural domain,” Tommie says. “This also confirmed our intention to walk a long road with Bell Equipment as our original equipment manufacturer (OEM) of choice as my relationship with Sales Representative Clifton Roberts goes back a decade or more.”

Due to demand from clients a third Bell 315SL TLB was added to the small but growing fleet a month later. Operating out of their base at Klapmuts, between Cape Town and Paarl, Neheto Plant’s equipment is sent as far away as Caledon, Bredasdorp, the De Hoop Nature Reserve, Elands Bay and Lutzville. Tommie is not shy to hire in equipment that he doesn’t own and, by his own admission, shows preference towards equipment made and sold by Bell Equipment.

“Our machines are popular with developers and builders of low-cost housing as they are mostly working against time,” Tommie adds. “Having new Bell machines with almost guaranteed maximum uptime is a win-win situation for everyone and a welcome assurance of repeat business.”

A few months after buying the Bell 315SL TLBs, Neheto Plant had an enquiry from a building contractor regarding a small excavator that could be used to dig footprints for buildings and be manoeuvrable as well. When Tommie consulted Clifton Roberts about this, he heard about the Kobelco SK55SRX Excavator, which at 5,5 tons would be ideally suited for restricted spaces that occur on some construction sites.

“I trust Clifton’s judgment and knowledge of the equipment he sells and did not feel the need to see a demonstration of the 5,5-tonnes Kobelco SK55SRX Excavator. On the strength of what Clifton told me, we bought two of these machines and what a revelation they’ve been for both us and our clients in civil construction and agriculture,” Tommie enthuses. “In digging a footprint of a building, the Kobelco Excavator is small enough to work in confined areas and digs out soil that doesn’t need to be carted away as the same soil is used to fill up floor spaces.”

The large apple and pear growing area around Grabouw in the Southern Cape sees a lot of activity in the winter months after the harvest as growers actively prepare land and maintain infrastructure, especially related to water and irrigation. Neheto Plant’s two Kobelco SK55SRX Excavators have been in great demand in this region and are used in a wide variety of tasks.

“The first advantage of the Kobelco SK55SRX Excavator that the growers noticed was that it has no tail-swing and this meant that the machine could easily move about in the rows of the apple and pear orchards without damaging the trees,” Tommie says. “At 0,16-cubic metre, the bucket is delicate enough to allow growers to dig out fruit trees for replanting elsewhere without damaging the roots and, being a tracked machine, it has a low ground impact.”

Neheto Plant’s equipment is generally hired out on dry rates and while exact fuel consumption figures were not available from clients, one apple grower mentioned that he filled up the Kobelco SK55SRX’s 75-litre fuel tank only every third day.

Christiaan Januarie, an operator employed by Neheto, is full of praise for the ease of operating the Kobelco SK55SRX Excavator. “I’m used to working on Bell 45-ton Excavators but took to this smaller machine immediately and I’ve enjoyed the push-blade that the machine has,” he says. “The cab has good visibility and the air-conditioning and radio make for a very comfortable working space.”

Having much experience as a plant manager, Tommie has learnt that any machine’s performance is dependent on solid technical maintenance and care and, for this reason, he has entrusted all his machines’ servicing to Bell Equipment. “We’re now in a growth phase and obviously watching our cash flow carefully but we had decided from the outset that we couldn’t cut corners on machine maintenance, hence our reliance on Bell Equipment,” he explains. “This also gives us the added assurance of when any equipment needs to be sold, we can hold up a full-service history done by a reputable OEM, using only genuine parts and trusted lubricants and so ensuring a good price.”

Tommie recalls a recent amusing episode when a client, who had requested one of the Kobelco SK55SRX Excavators for maintenance work on a farm, called him and asked when the machine would be delivered. “I laughed and told him the machine had already been working on his farm for two days but as it ran so quietly, no one knew it was there,” he says. 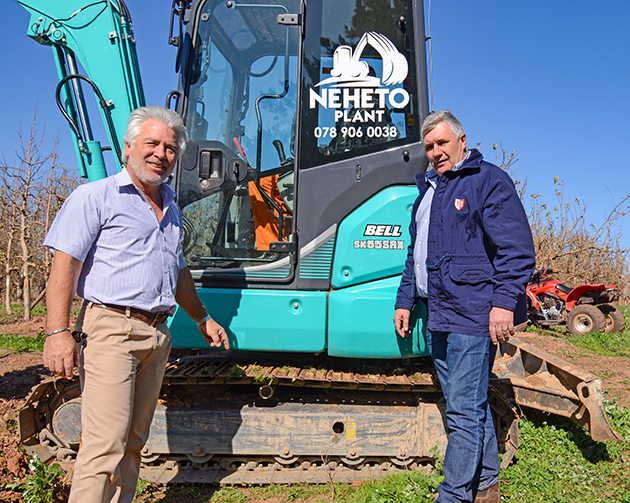 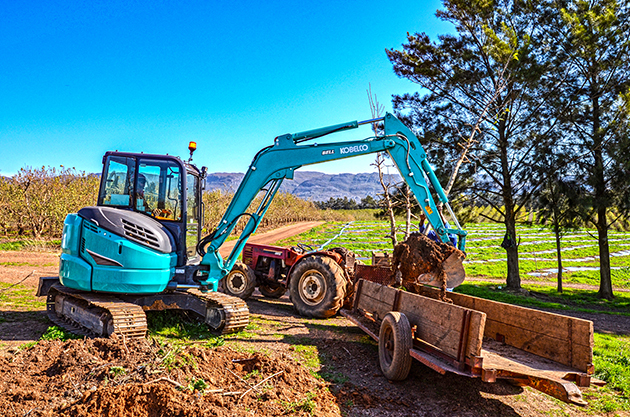