Use of Bell ADTs takes off on Hong Kong airport project

Planned for completion in 2024, the Third Runway Project at the Hong Kong International Airport (HKIA) is a mammoth undertaking by anyone’s standards that involves reclaiming about 650 hectares of land north of the existing airport island and constructing a 3 800-metre long runway along with supporting taxiway systems.

A Third Runway passenger concourse of 283 000 square metres with 57 new parking positions and an apron will also be built. Connecting Terminal 2 to this new building will be a 2 600-metre long automated people mover (APM) system capable of transporting up to 10 800 passengers per hour. With a top speed of 80km/h it will take 2,5 minutes to travel from Terminal 2 to the new passenger building.

A new baggage handling system (BHS), with a baggage transport speed of 7 to 10m/sec, will be built to link Terminal 2 with the new passenger building. In addition to the construction of other associated airport infrastructure, road network and transportation facilities, the existing Terminal 2 will be expanded to provide arrivals, departures, and fully-fledged passenger services.

The HKIA is already Asia’s third largest airport in terms of passenger volume and the airport’s Master Plan 2030 forecasts that it will be able to serve 30 million additional passengers annually on completion of the project.

The project requires about 100 million cubic metres of material and provides a great opportunity for Bell Articulated Dump Trucks (ADTs) to showcase what they are capable of. Currently there are 34 trucks on site, predominantly B45Es owned by various reputable construction companies.

Since 2019 TLMC has been the authorised distributor of Bell ADTs in Hong Kong. The company aims to provide high quality heavy equipment to its customers including excavators, compaction machines, dozers, lifting cranes, generators, hydraulic breakers, and orange grapples, etc.

Director of TLMC, Jawin Chow said TLMC became the region’s authorised Bell distributor in 2019 having been impressed with the build quality of the Bell ADTs and the reliability of its components.

According to Jawin, the ADTs on the Third Runway Project are currently used to complete the bulk earthworks on the land reclamation and to move materials for the runway construction. Haul distances vary between 200m and 1,5km and although there are some sand roads, underfoot conditions are generally wet, muddy and rough as the job site is formed by fill materials. In these conditions, the customers are satisfied with the productivity of their trucks and fuel economy, with the lowest recorded range of 9,5 to 12 litres per hour and up to a maximum of 23 litres per hour. However, they believe ease of operation would be enhanced by a control display unit in Chinese.

In addition to the Third Runway Project, Jawin said that Bell ADTs are in use on other high-profile projects in Hong Kong including major construction at the main tunnel between Lam Tin interchange and Tseung Kwan O interchange as well as the Tung Chung Reclamation Project. Upcoming projects are land reclamation projects on the islands Lung Kwu Tan and Lantau in Hong Kong.

Bell Equipment Marketing Manager: Sales and Distribution, Llewellyn Roux said: “TLMC is well placed in Hong Kong to provide equipment to these large-scale projects and is commended on making positive inroads in a relatively short period of time. Their dedication to aftersales services and efforts to promote the Bell brand have seen the company achieve a very pleasing market share of over 85%.” 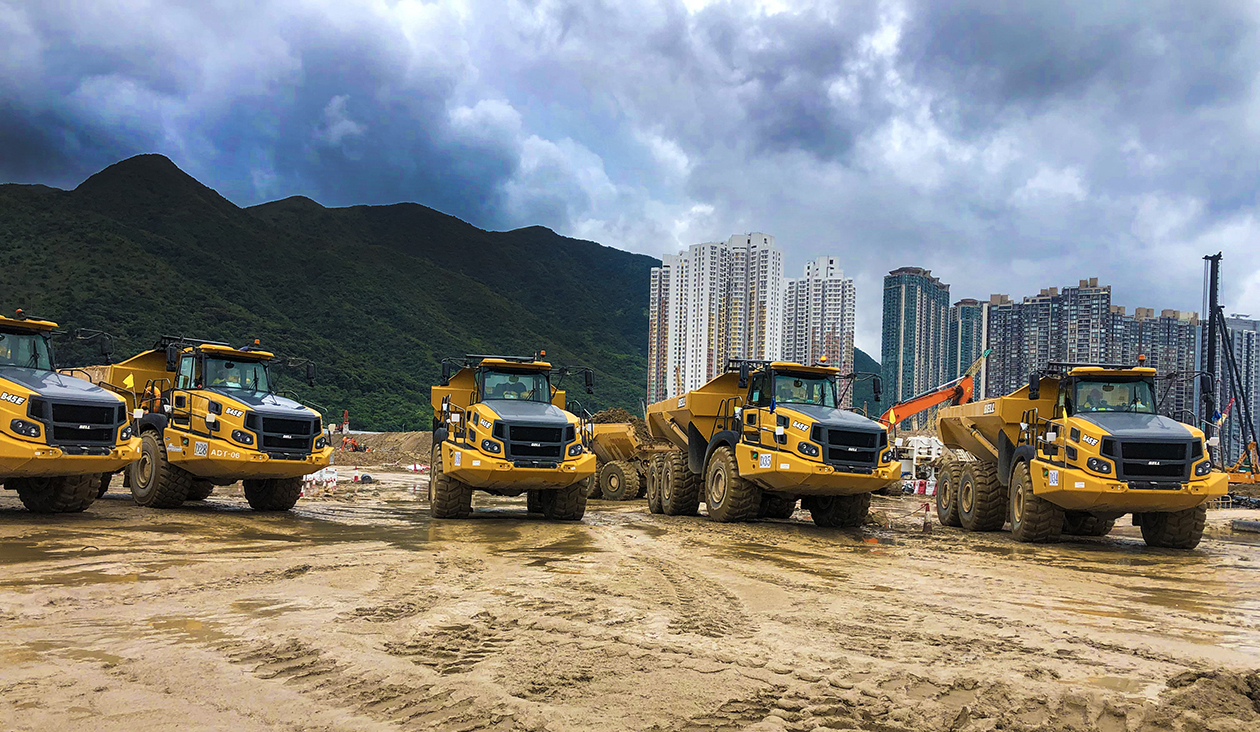