Now if the current Mpumalanga coal mining world seems to be an orderly place, some male contract miners better watch out because two highly qualified female engineers are about to upset their seemingly serene world.

By their own admission Silindokuhle Sithole and Molebogeng Mogashoa are those disruptors. The pair met while studying towards respective Masters’ in Business Administration (MBA) degrees at Pretoria University’s Gordon Institute of Business Science (GIBS). Both are process engineers with post-graduate qualifications in engineering and had worked up to management roles for the same international mining company, though in different commodities, before deciding to get out of their comfort zones to make a difference in the lives of others.

“We had noticed that most emerging contractors and new businesses wanting to serve the mining industry had little or no business acumen or mining experience, which often made it challenging for potential mining clients to offer opportunities within their revenue generating core mining activities,” Silindokuhle says. “Molebogeng and I had created a company under the name of TauSadi with ‘Tau’ being the Tswana name for a lion and ‘Basadi’, which are women, to set us apart and bridge this gap amongst emerging contractors.”

“The high unemployment rate, gender inequalities and the need to run businesses sustainably in South Africa came to the fore and we looked to where we could make a difference,” affirms Molebogeng. “We also believed, and still do, that women are capable and can make a success of a variety of services to the mining environment in what is traditionally a man’s world.”

The reality hit home once both had resigned from their salaried jobs in 2016 and they were working from the campus of the business school while completing their MBAs. A short-lived contract doing stockpile management and loading trains ended after a month due to unforeseen circumstances on their clients’ side and by then they had converted a remote farmhouse in Mpumalanga into an office.

“We survived living off our savings and meagre pension funds. It was tough going but in 2018 we got our foot in the door of opportunity when we landed a six month contract on a coal mine stripping topsoil and hauling it to a stockpile for later use in rehabilitation,” says Silindokuhle. “We must have done something right because after the initial six months the contract was extended by a further three months and then even further.”

“This project had started in 2019 and after the initial six months we were told we were outperforming our targets and we were given a second project to perform mine rehabilitation services on behalf of the client. To do this work we were renting in earthmoving and haulage equipment. Although we didn’t make much profit, we saw this as beneficial in the long run to keep our foot in the door and to build a positive reputation that we could deliver more than what we had promised.”

Come the new year of 2020, and with a longer-term contract, both Molebogeng and Silindokuhle realised that they now needed to procure their own fleet of yellow machines to make it all worthwhile. They successfully arranged finance through a bank linked to their now longer-term contract and their choice of haulage equipment fell on four Bell B40E Articulated Dump Trucks (ADTs).

“We’ve each been in the South African mining industry for over a decade and have learnt that Bell Equipment sets the benchmark for ADTs in these conditions with its local design and build, which points to high local content and above all, availability and great reputation,” Molebogeng says. “The Bell B40E ADTs perfectly matched our business model in terms of targeted volumes and cycle times.”

The TauSadi partners appreciate that reliable and accessible technical back-up is key to ensure sustained delivery to clients through maximum mechanical availabilities. That Bell Equipment’s Middelburg customer service centre was so close by further justified their choice of the Bell B40E ADTs. The four Bell ADTs were bought with extended warranties to 10 000 hours on their wet drivetrains and hydraulics and TauSadi Mining and Engineering has the added peace of mind provided by a service contract with Bell.

“Bell Equipment’s response times are good as was shown when there was an issue on coolant levels when we first received the Bell B40E ADTs which was very quickly resolved,” Silindokuhle points out. “Although we work on dry rates with a limit on our fuel consumption in place, we’re both pleased and impressed with the fuel consumption of the B40Es at 24,5 litres per hour.”

“One’s mining equipment and its performance is such a major part of your reputation and to this end we’ll look to replace loading and haulage equipment with new models at around 15 000 to 16 000 hours,” she adds.

The two partners of TauSadi Mining and Engineering are blessed with high energy levels which translates into much forward-thinking ambition. They are keen to diversify into mining other commodities such as precious and base metals and not put all their eggs into one basket.

“We’re looking at providing the full mining package from planning to process engineering and would love to own a mine and not only do contract mining,” they say. “Our ultimate aim is to own mining rights and therefore the entire mining value chain, and having an original equipment manufacturer and supplier such as Bell Equipment that appreciates this is a bonus.” 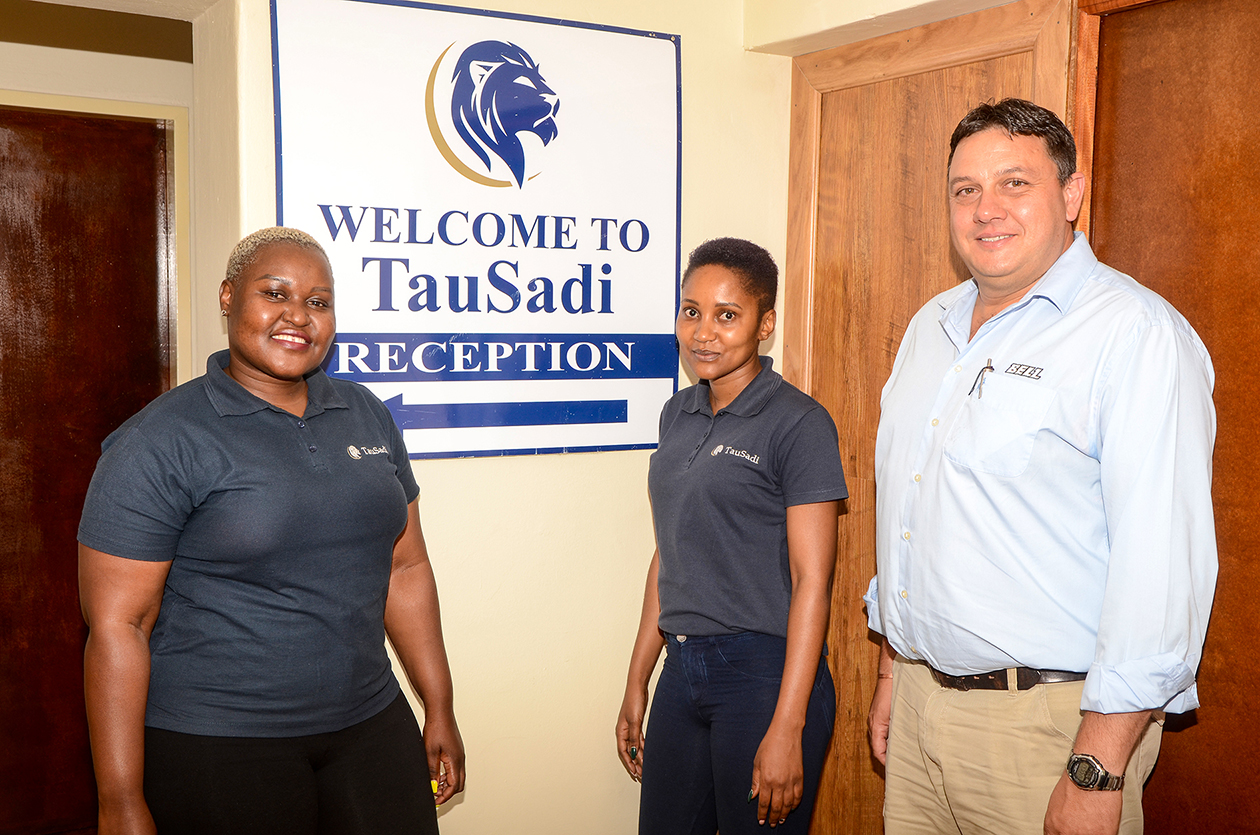