A focus on improving ease of operation to provide more efficient and safer Articulated Dump Trucks (ADTs) has consistently kept Bell Equipment at the forefront of innovation. The global ADT specialist is now achieving success with autonomous vehicle operation where its forward-thinking approach is enabling interoperability between different control systems and the trucks it produces.

An autonomous operation has three elements: machines that can be operated remotely, external sensors that become the eyes and ears of the machine, and sophisticated site control software that manages the operation based on communication with the other two elements. According to Bell Equipment ADT Product Marketing Manager, Nick Kyriacos, “providing autonomous-ready machines will be a part of our core business in the future but in terms of sensing and guidance systems it makes sense to partner with market leaders and innovators, as we do with drivetrain, hydraulics and electronics technologies in our trucks.”

At the same time, Bell wants to provide a vehicle that can be fitted and controlled with a guidance system from any number of manufacturers with the easiest integration. “Autonomous applications are industry specific and require surveying and guidance by an industry expert. We want our customers to be able to choose a guidance solution that they are most comfortable with and that can be fitted to all the machines in the work cycle. Keeping the guidance system independent of the OEM gives customers the flexibility to run a mixed fleet and benefit from the efficiency and productivity that provides,” says Nick.

Adding to the flexibility, Bell provides a standard cab with no extra hardware taking up space to create an environment where manual, remote or autonomous operation is interchangeable. “This would be useful for mining contractors, for example. Once their ADTs have finished a contract on an autonomous site, the sensory and control system could easily be removed and the truck either fitted with a new system for another site or be used in a manual operation.”

As economies of scale and technology become more affordable and reliable in the future, Bell expects to see smaller and smaller sites embracing autonomous operations. “Support vehicles, such as service vehicles and water bowsers, may also form part of autonomous operations. This would make it even more important that every machine on site, regardless of the OEM, is able to use and respond to the same software. We envisage that there could also be sites where the main earthmoving operations are fully autonomous, but support vehicles that perform a wide variety of functions are remotely operated from a central area. This would allow the site to have no people whatsoever which improves safety.”

The road to an autonomous ready platform

Achieving an autonomous ready platform was a natural progression from the Bell Mark 3 ADT upgrade at the end of 2019 when trucks were made ready to integrate with pedestrian detection systems (PDS) and collision avoidance systems (CAS).

“We’re always looking to add value and stay ahead of the curve,” says Bell Equipment’s Manager: Electrical and Software, Eben Lemmer. “We were first to develop our own telematics solution, Fleetm@tic®, and to introduce onboard weighing, which is standard on our ADTs. When we introduced an inclinometer to improve our onboard weighing accuracy, we saw an opportunity to improve the safety of our trucks with our Hill Start and Tip Safe features that prevent rollback on slopes and rollovers due to tipping at unsafe angles. Similarly, by adding further layers on top of the existing PDS ISO standards we have created an autonomous ready platform that uses an open communication protocol principle to integrate easily with third party suppliers.”

Bell Equipment’s focus is on the execution of instructions from third party suppliers. Eben explains: “In the work environment the guidance software processes all the sensory input, plots a path and sends instructions to the Bell drive-by-wire interface, which electronically controls the acceleration, braking and steering of the truck. Our communication simulator provides the ability to collaborate with service providers by allowing them to test communication and response in the desktop environment prior to going live in-field. This makes it easier to develop and test new software for controlling the Bell ADT.”

Bell first demonstrated that cost-effective remote control is achievable with the right building blocks when it successfully operated a B45E with a video game controller. Since early 2020 the company has been working with indurad and voestalpine on a lime quarry site in the Alps where the industrial radar specialist has fitted its iTruck autonomous haulage system (AHS) on Bell B30E ADTs with excellent results. “Autonomous control in this application is advancing all the time as technology pushes the boundaries and improves the efficiency of the operation. The project is ongoing, and we are now growing our number of collaborations both locally and abroad.

“Autonomous vehicle operation is an exciting space to be working. Not only is it aligned with the Fourth Industrial Revolution’s objective of achieving higher levels of automation for greater process efficiencies and cost reduction, but we believe it will deliver safer vehicle behaviour by reducing the instances of human error and negate the impact of whole-body vibration on operators in the workplace,” says Eben.

In most cases an autonomous operation will also need the end customer to set up their site to work differently; there may be special traffic control measures, berms or even different roads needed. At this point in time Bell has an autonomous ready solution available for customers that are interested in doing proof of concept work in their application. “During this phase we are still learning along with our customers, but we expect our offering to stabilise soon. From there, should anyone express a wish for a full-scale commercial solution, we are confident of being able to deliver within a timescale that is consistent with their expectations.” 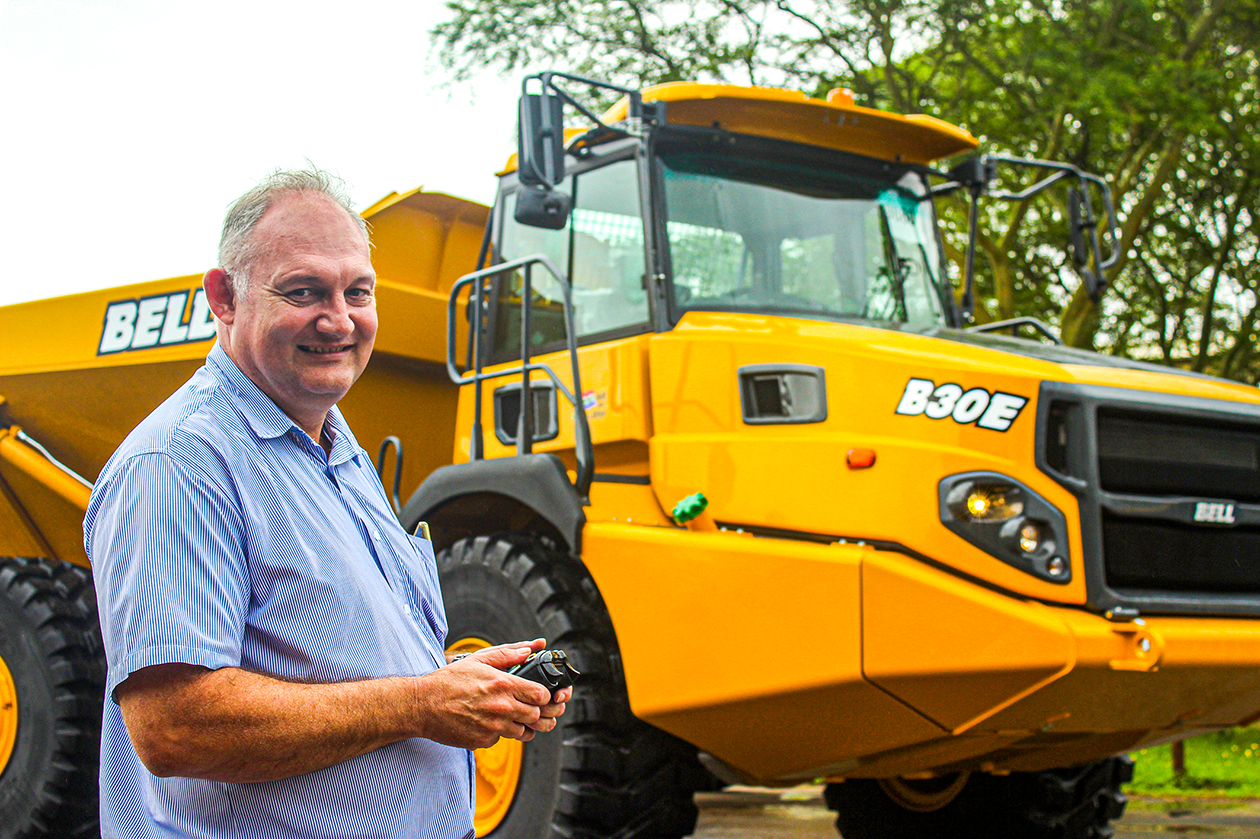 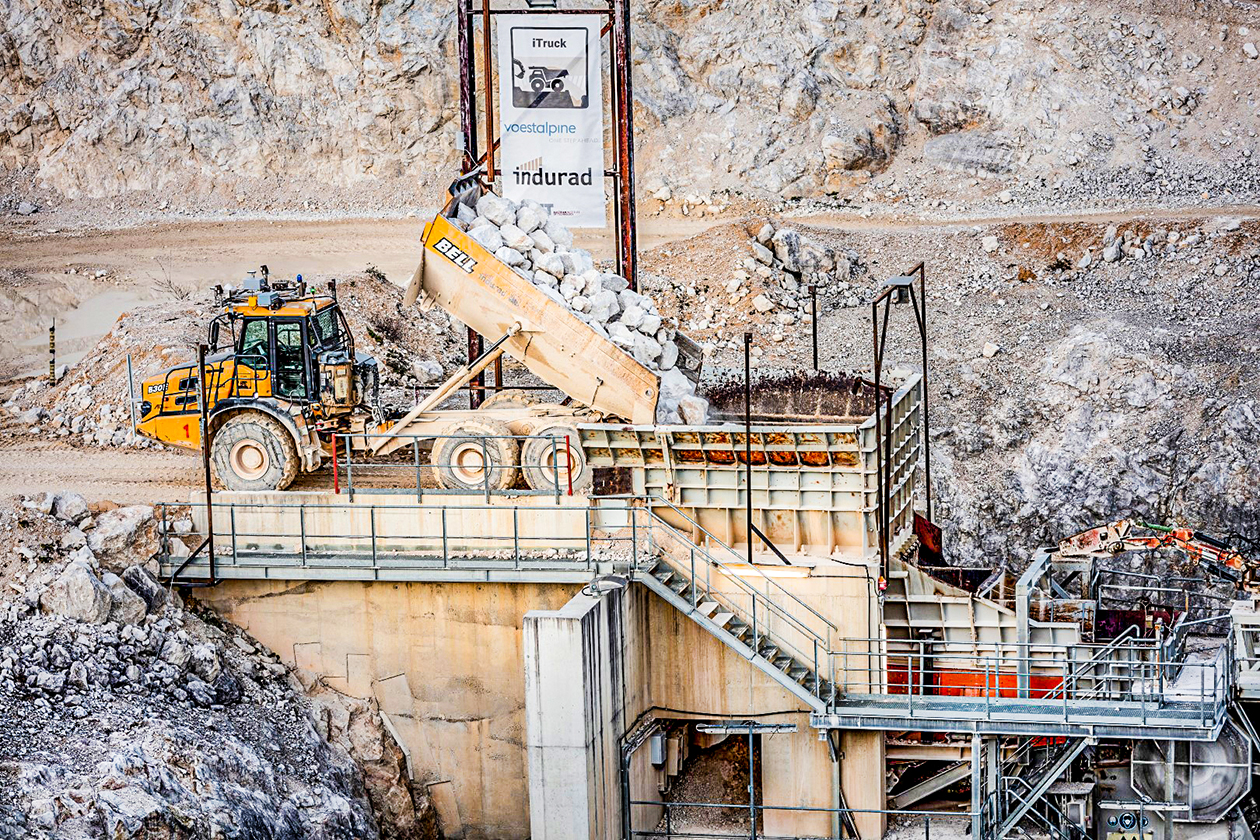 A Bell ADT running in a fully autonomous site in Austria with partners indurad and voestalpine. Photo courtesy of indurad/voestalpine. 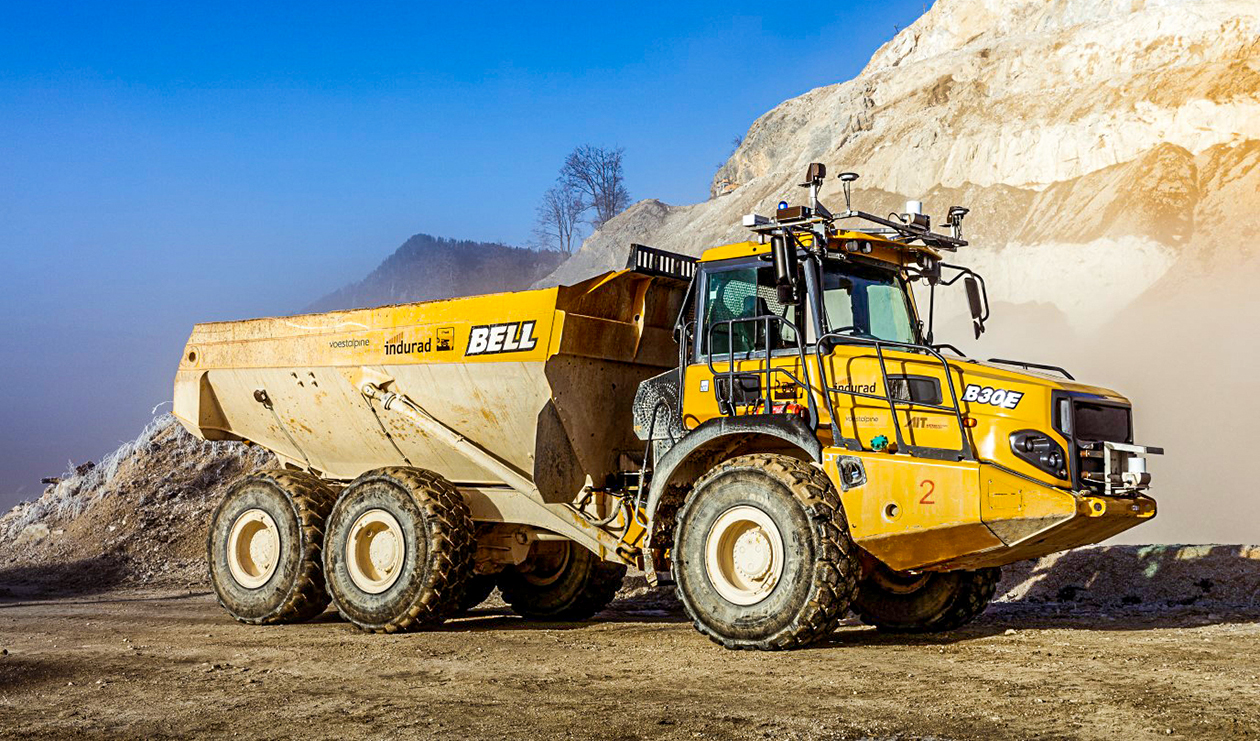