Bell machines and support are rooted in MDZ’s success

In the Venda language, the name for ‘root’ is mudzi. While some may find it strange to base the name of a company on a root, an entrepreneur from South Africa’s most northern province, where Venda is mostly spoken, believes his well-rooted academic grounding, solid financial knowledge and business acumen forms the basis on which to build a growing business in logistics and contract mining.

Aluwani Ramabulana is no ordinary entrepreneur who on a whim ventured into self-employment when he got tired of working for a nagging boss and a poor salary. This graduate chemical engineer who first qualified at Oregon State University in the USA, spent time working in opencast mining for De Beers before receiving an MBA from Nyenrode University in the Netherlands. This was followed by a stint with an international pharmaceutical company in Switzerland before returning to the land of his birth to do strategy consulting with financial institutions.

“I was fortunate enough to then become Managing Director of Mercedes Benz’s fleet services where knowledge gained, combined with the earlier experience with the banking sector, gave me a very firm footing in financial disciplines, which really is the root of any business venture,” he tells us. “I could also count on the experience gained in opencast mining to set me up for a future career running a fleet of trucks profitably.”

And so, in 2013, Aluwani started his company MDZ Fleet Solutions with MDZ being an acronym for ‘mudzi’. “Our first venture was importing truck tyres from China and from there we grew the business to transport diesel to the mines while acting as second-tier wholesalers,” he explains. “This exposure to mining put us in touch with mining logistics and this was a field where I felt especially at home.”

An introduction through a contract mining company saw MDZ Fleet Solutions being awarded a contract for on-mine logistics which involves material handling, in this case on a manganese mine in the Northern Cape.

“When our contract started we had no equipment, we had to hire in plant to deliver what our clients rightfully expected until we received our own machines a month or so later,” Aluwani says. “We were in a bit of a bind because even though we had a firm contract, we were a young company and we battled to get financing.”

“What saved the day for us was that Bell Equipment, through its supportive and knowledgeable Sales Representative, Chris Botha, backed us all the way and we eventually took delivery of four new Bell B40E Articulated Dump Trucks (ADTs) in October 2018 and by the middle of 2019 we also bought a new Bell Wheel Loader. We owe a lot to Chris and his principals for the effort they put into making the deals happen.”

Aluwani is adamant that his choice of Bell B40E ADTs was an easy one as he was familiar with the brand that is known for its quality of design and durabilty. “That Bell Equipment is a homegrown South African brand sits well with us, and the company’s wide footprint in ensuring technical support and parts availability gives us confidence as we know that any piece of haulage or material handling equipment is only as good as its support.”

The fleet was bought with tailored 36 month/11 000 hour extended warranty and Bell Care Package that sees mechanics from the Bell Kuruman's branch doing all servicing and repairs for the entire warranty period.

MDZ Fleet Solutions is tasked with moving blended manganese ore from stockpiles to near a rail load-out station and sometimes further. As its clients provide diesel for the four Bell B40E ADTs, fuel usage is monitored over a broader period as opposed to hourly but according to Enos Munyai, MDZ Fleet Solutions’ COO and hands-on manager at the manganese mine site, the four Bell B40Es and Bell Wheel Loader run well within the fuel budget.

By early 2021 two of MDZ Fleet Solutions’ Bell B40E ADTs had clocked close to 9 000 hours of sustained service and these were traded in on two similar new models. With a solid set of financial records in place coupled with an on-going contract, the company easily secured finance for two new Bell B40E ADTs with yet another one in the pipeline.

“You will appreciate that we’re an ambitious company and we’re looking at not only contract mining but mining our own resources as well,” Aluwani continues. “To this end we’ve acquired a 12% share of an anthracite mine and plan to do the same in manganese and chrome deposits elsewhere in the Northern Cape and North West provinces while keeping our eyes and ears open for similar opportunities in coal as well.

“We see Bell Equipment as playing a definite part in our future as not only did the company support us when we were struggling to buy our first Bell ADTs, but it has since gone a lot further in having our own maintenance staff enjoying training and the transfer of general mechanical skills at the Bell Equipment branch in Kuruman,” Aluwani concludes. “Support on so many fronts deserves to be rewarded with brand loyalty.” 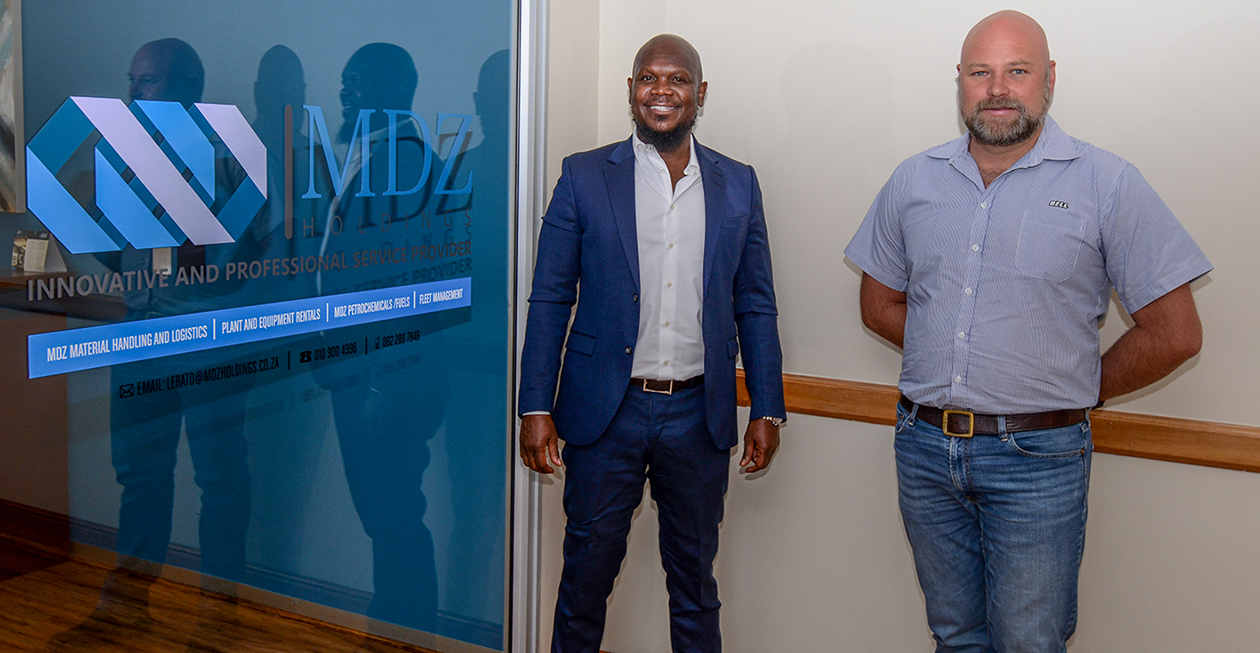