What do a pharmacist, an agronomist and an accountant have in common barring the fact that they are all related as cousins? Probably nothing you’d say unless all three are partners in a business venture such as that doing contract forestry harvesting, which started out as a timber transport company.

The idea of buying a truck to haul timber came about during informal discussions in December 2017 between Kholiwe Shabangu, the pharmacist, Maswazi Mkhatshwa, the agronomist and Jabulile Kunene, the accountant.

“I had spent some 12 years working for a forestry company here in Eswatini and, as a minor director, held a minor shareholding,” says Maswazi Mkhatshwa, the ‘thorn’ amongst his two partner ‘roses’. “I had this dream though of being self-employed and when Kholiwe suggested we buy a truck to do timber haulage, I supported the idea wholeheartedly.”

“Maswazi at first wanted to do contract work for Jabulile and I but we insisted he be a part of the partnership as well because we saw the value that he would bring,” Kholiwe says. “In the end, it merely took a phone call from Maswazi to make it happen and we had a five-year contract to haul timber for the company he had worked for.”

The young company, called Khojama Investments, bought its timber truck in January 2018 and started hauling harvested timber from forestry areas in the west of Eswatini to a large sawmill at Bhunya, a distance of some 30km. The three partners soon realised that they were ready to take on bigger things and when Maswazi approached the forestry manager of their client, he offered them a contract doing thinnings where selected younger pine trees are removed to stimulate growth amongst the remaining trees.

“By May 2018 this new contract was in place, and we were tasked with delivering 2 000 tons of pine thinnings a month, which was a daunting task as we were working manually,” Maswazi says. “We decided then to rent two Bell 225A Loggers and a Skogger from a forestry plant hire company and, although it was expensive, it got us going which meant we had cash flow and we started building up a credit score with the bank.”

“Looking back, the two Bell Loggers and the Skogger saved the day and our future reputations, as we could realistically not have sustained our production in any other way!”

Typically, Khojama Investments would deploy three chainsaw teams into a compartment where the trees to be felled would be marked. A Bell Logger would pre-bunch the felled trees which would then be extracted by the Skogger to roadside, where the other Bell Logger would stack the timber. Here it would be cross-cut into predetermined lengths and stacked again using the Bell Logger.

“Our plan was to buy our own equipment and we started this process by paying a deposit on two Bell 225F Loggers in January 2019,” Kholiwe says. “In May 2019, our dream came true when we took delivery of two new Bell 225F Loggers and we have high praise for Charlie Boucher and his team at Bell Equipment in Eswatini for making this happen.”

Mechanics from Bell Equipment’s Eswatini branch at nearby Matsapha serviced the Bell Loggers while they were under warranty and have continued this service for major servicing. Khojama Investments attends to minor servicing now that the Bell Loggers are out of warranty.

In August 2020, Khojama Investments’ thinnings contract changed in that their clients no longer wanted the felled timber cross-cut at roadside but hauled to the mill in full tree lengths where another contractor would do the processing. “We thought at first that this would ease the pressure on our production, but the opposite happened as our clients doubled our production targets. By mid-2021 we realised we would need to buy our own Skogger to meet the demand,” Maswazi says. “We subsequently ordered a new Skogger from Bell Equipment in June of that year, and it was delivered in October 2021.”

Khojama Investments now runs two shifts in their thinnings operations, one from 6:30am to 3:30pm and the second from 4pm to midnight, which means that high mechanical availabilities and utilisation of their mechanical equipment is called for.

Despite this, their Bell 225F Loggers use diesel at an average of 5 litres an hour while the Skogger runs at between 6,5 and 6,8 litres an hour with both types of machines’ fuel consumption well within the fuel cap that is set and monitored by their clients.

“Safety in the forest is a big concern for us and our clients, and the lights, especially on the Bell Skogger, make for good visibility and safe operations,” Kholiwe adds. “But more impressive is the level of service we get from Bell Equipment at Matsapha when even at 4am one phone call to Charlie Boucher ensures that a mechanic is on his way to us quickly.”

Kholiwe also says that should parts not be available immediately, Bell Equipment ensures that they arrive within 48 hours at the utmost and so minimises the downtime of their equipment. Both she and Maswazi echo that communication between themselves and Bell Equipment is clear and the latter is always prepared to listen.

The young company’s third partner, Jabulile Kunene, was attending to other matters on the day of the interview but both Kholiwe and Maswazi say that she shares their dream list of a fellerbuncher and a processing head mounted on an excavator carrier as the next equipment to acquire. We’re confident that with their drive and energy, they won’t need to wait long. 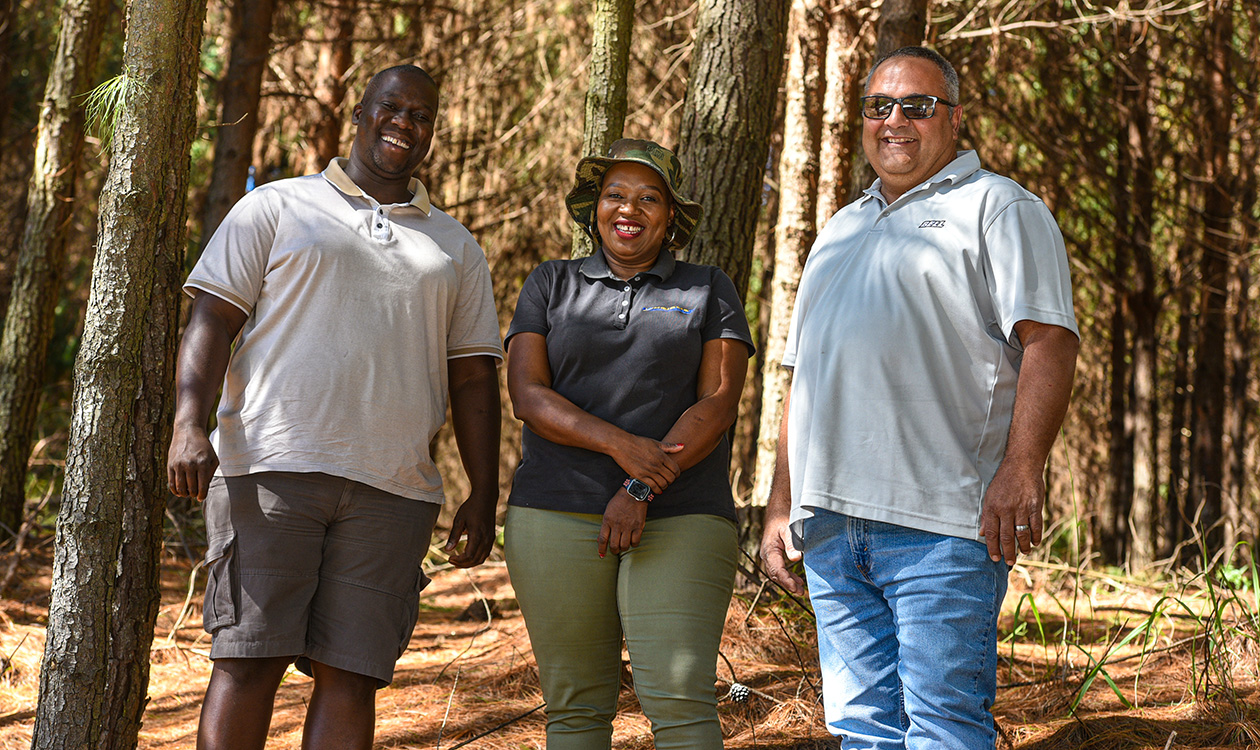