A well-known Free State maize farming family is enjoying the versatility that using a fleet of Bell 1734AF Haulage Tractors offers while lowering their all-round production costs and increasing efficiencies.

The Van der Linde family farm mainly maize and wheat on their farm Klein Constantia northwest of Wesselsbron. The family has owned land and farmed in this area since 1888 and presently the fifth generation is doing exactly that with some significantly added value.

In 1993, Lourens van der Linde Senior, the fourth-generation descendant, decided that with his three sons growing up he wanted a larger part of the maize value chain and established a maize mill in the nearby town of Wesselsbron. LFC Milling (Pty) Ltd supplies maize meal to large supermarket chains and wholesalers across South Africa. Such has the demand for its quality products grown that the mill is currently undergoing its third expansion phase.

The name LFC is derived from the names of Lourens van der Linde’s three sons. Lourens Junior manages the farm, Francois looks after the finances and Cobus manages the production of the mill. All three have university degrees in agriculture and finance respectively.

“The production from the farm is sold to the South African Futures Exchange (SAFEX) at the best possible prices while our mill buys its raw material at the lowest possible prices,” explains Lourens Junior. “We established our logistics arm, LFC Logistiek, in 2014 with the express purpose of delivering our milled products across the country using six interlinked truck-trailer combinations.”

“Towards 2017 we saw the need for a dedicated fleet of haulage machines to haul maize to the mill in the harvesting season and to haul seed, fertilizer and water to the lands in the planting season, amongst other uses,” Lourens adds. “While we do have a substantial fleet of agricultural tractors, we use them for what they were designed for – land preparation and ploughing, planting, harvesting and what goes in between.”

The Van der Lindes did extensive online research and then saw a Bell 1734AF Haulage Tractor at NAMPO. “We liked the look of the design and rigid build with lots of steel used in the Bell 1734AF Haulage Tractor as well as it’s Allison automatic transmission,” Lourens adds. “Our plan was that the tractors would haul tandem side-tipping trailers that we would have custom built, and for this we needed a haulage tractor fitted with air-brakes that aren’t generally found on agricultural tractors.”

Minor modifications were done to facilitate hitching existing plant and equipment. Most important were adjustments to the hydraulic system to effectively operate the side-tipping trailers, drive water pumps and fertilizer cart augers. The Bell 1734AF Haulage Tractors’ gooseneck draw bars were swapped out for double-lip tow eyes to link equipment that gets hauled by agricultural equipment as well.

“In our winter maize harvesting season our tandem side-tipping trailers are loaded infield and with a 32-tonne payload the Bell 1734AF’s all-wheel drive traction really comes into its own with superior traction on our sandy roads,” Lourens says. “But then, when the tractor reaches 15 km/h, the adjustable all-wheel drive system automatically changes to two-wheel drive, which is a fuel-saving feature and one we really enjoy.”

The longest distance the Bell 1734AF Haulage Tractors cover is around 30km from the farm’s most western areas to the mill, and even at these distances consistent fuel burn of 7 litres per hour are recorded at speeds of up to 40km/h with full loads.

“Our research has shown that we probably would use less fuel hauling the maize using trucks but the advantage of using the Bell 1734AF Haulage Tractors is their versatility, which gives us use of them throughout the year hauling a multitude of implements and equipment, where trucks would only be used during the harvest,” Lourens says. “We even move sand and fill material with them using conventional back-tipping trailers as there is always maintenance and improvements to be done both on the farm and at the mill.”

“Unless we dramatically add more production units to our farming operation, these six Bell 1734AF Haulage Tractors are the perfect fit for our needs,” Lourens says. “The secret in their usage though is their versatility and high mechanical availability which frees up our agricultural tractor fleet and, in doing so, lowers our production costs which, as you will appreciate, impacts our bottom line positively.” 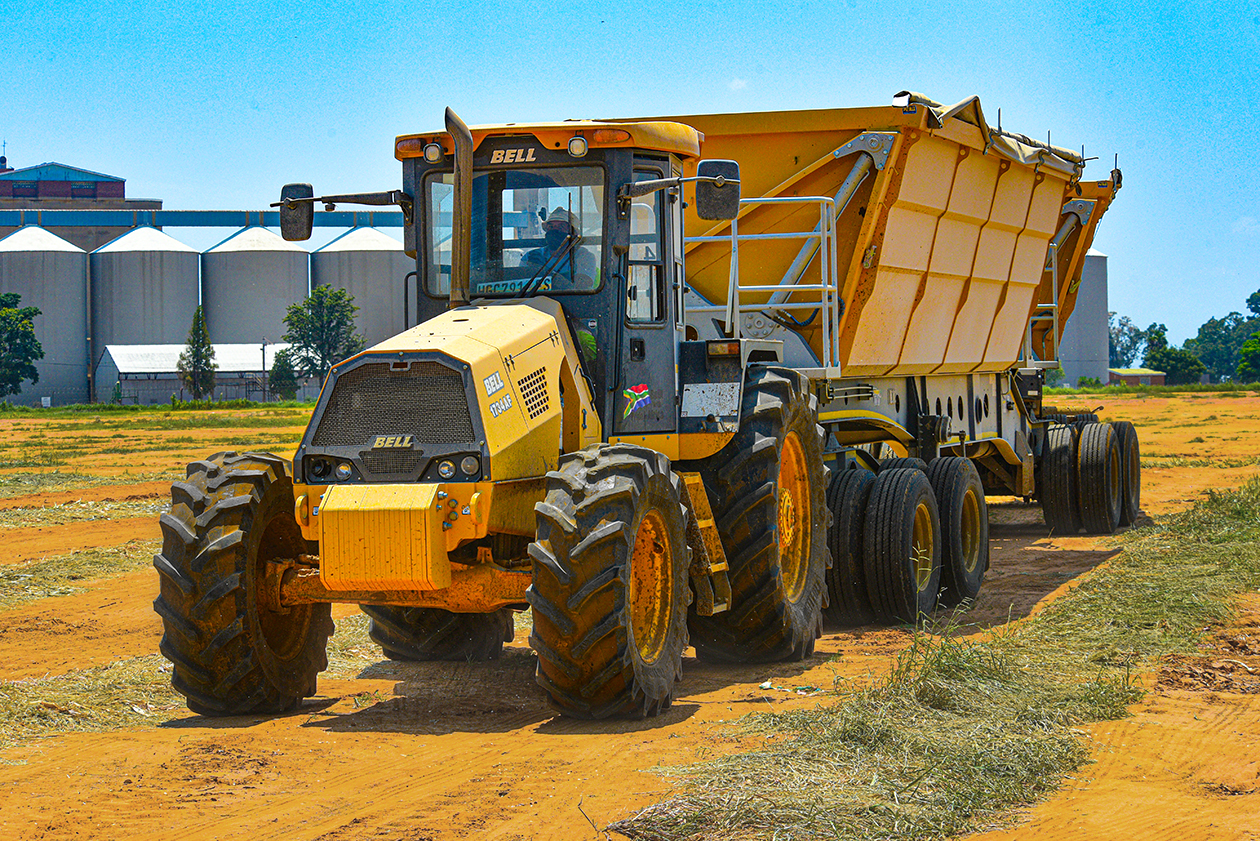