Manufacturing clay bricks in South Africa has followed a centuries-old method of mining the clay, allowing it to weather or sour, then mixing it with water and coal before it is extruded into shape and cut into individual bricks, which are stacked outside to dry. Then they are stacked into a large rectangle called a clamp and allowed to burn from the inside until baked hard. This last process can take up to three months, until now…

Enter a revolutionary rotating kiln, built like an extremely large steel-framed and clad doughnut where the heating source moves on rails in a circular way and produces perfectly baked bricks every seven days!

There are presently only two such plants in South Africa and we visited the most recently completed one at Johnson Bricks, outside Oudtshoorn. Johnson Bricks is over a century old and has been owned by the Truter family since 2007. Lawton Truter, as Managing Director, oversees the operations.

“We produce plaster and semi-face bricks which are distributed as far as Knysna on the coast and Barrydale, De Aar and Victoria-West inland to an ever-increasing construction market, which indirectly demanded that we radically up our production,” Lawton Truter says. “This new technology has done exactly that, upped our production but it has also had an upstream effect on our raw material production processes where we’ve had to sharpen up considerably.”

Johnson Bricks mines clay from its own clay source situated right next to its plant. For the past four years the company has deployed a Kobelco SK350LC-8 Excavator to load two Bell Articulated Dump Trucks (ADTs) that haul the clay to the plant, some 400m away. While a 2006 model Bell B30D ADT with some 21 000 hours is still in daily use, its smaller B18D compatriot has been replaced with a newer Bell B30E ADT, now boasting 4 000 hours.

“Collectively this excavator and larger ADT combination has already given us increased production but I was keen to make the operation even smoother by using a newer and slightly heavier excavator to ensure that nothing comes in the way of production to keep this rotary kiln of ours fed with green (unbaked) bricks,” Lawton explains. “We’ve had wonderful service from our first Kobelco Excavator which, in the three years that we’ve had it, has clocked 6 000 really productive hours as it upped our previous production by 60% with little additional fuel used.” 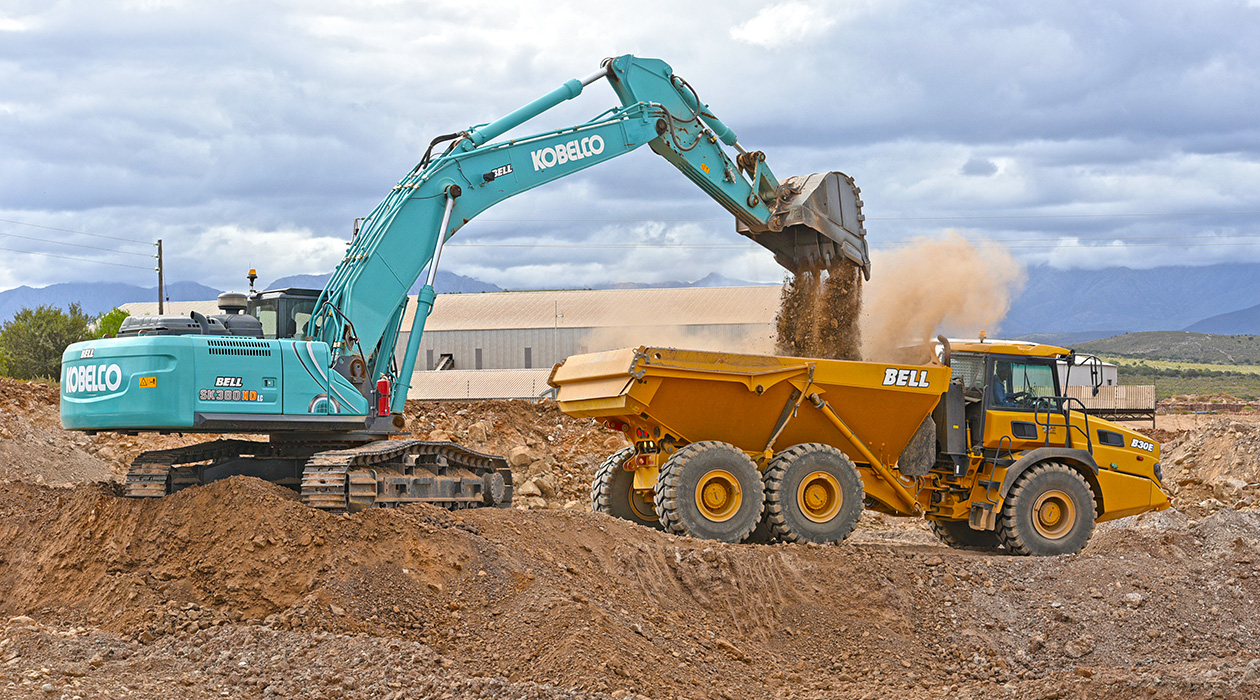 Lawton consulted with Fiona Johnson, Bell Equipment’s Sales Representative who services that area, and she had good news. Johnson Bricks was keen to keep its present Kobelco SK350LC-8 Excavator as a spare machine so there would be no trade-in to negotiate and Bell Equipment offered a highly competitive price on a new Kobelco SK380XDLC-10 Excavator with a slightly larger bucket size as its predecessor and delivering with more breakout force.

“As a family-run business we’re a little old-fashioned when it comes to money and we’re wary of incurring debt,” Lawton says. “We therefore thought it wise to buy the new Kobelco SK380XDLC-10 Excavator cash and are happy that we did as Bell Equipment shows that it appreciates our business and is so good about honouring warranties should they be needed.”

Someone else who is pleased with the new Kobelco SK380XDLC-10 Excavator is Johnson Bricks’ Excavator Operator, Johan Laufs. “I’ve been working with these types of machines for around 18 years now and while I really enjoyed the 35-tonner, the power on the new Kobelco 38-tonner has really impressed me while the cab seems to be roomier with improved all-round visibility,” he says. “It’s also hard to believe a machine with this much power only uses 21 litres of diesel an hour.”

“By all accounts, acquiring the new Kobelco SK380XDLC-10 Excavator is paying dividends already as our brickmaking plant is running well and we can put this down to there being a consistent feed of raw material which starts in our clay mine,” Lawton says. “We’re confident that this total package of new mining and processing hardware heralds a turning point for us as a producer of quality clay bricks.”

Johnson Bricks’ entire fleet of earthmoving and product-handling equipment is supplied by Bell Equipment and serviced from the branch in nearby George. The company runs three Bell L1506E Wheel Loaders, the most recent of which was acquired in mid-2021. These machines are used to feed the extrusion plant with soured clay and coal and do a multitude of housekeeping duties. In the brickyard five very busy Bell 225A Versalifts do the heavy lifting, stacking and moving of pallets of green and baked bricks. They also load the company’s fleet of nine rigid trucks that transport the products to eager markets.