Large earthmoving projects offer up plenty of challenges for contractors of all kinds. It takes knowledge, experience, and the right equipment to get the job done right every time - and Allan Construction has plenty of all three.

Since 1992 Allan Construction has been part of the contracting scene in Saskatoon, the largest city in the Canadian province of Saskatchewan. The company has built a reputation as a talented and trustworthy operation when it comes to infrastructure work and other big jobs and relies on Bell Articulated Dump Trucks (ADTs) from Wajax for its earthmoving efforts.

The founders, husband and wife team Monte and Gail Allan and their five business partners, have steadily evolved the company from general contracting to projects crossing a wide variety of industry segments. Its contracts have expanded from the commercial sector into industrial and civil work. One of Allan Construction’s partners, Kevin Arneson (Kevin A), said the growth resulted in a need for subcontractors to handle their earthworks projects.

“A lot of the time sub-contractors wouldn’t show up when we needed them, so we started buying our own small skid steers and other equipment to do our own work,” Kevin A said. “We got into larger excavators for doing some deeper underground work, foundations and other projects, and it all grew from there.”

Today, Allan Construction has a large fleet of equipment and a regular staff of 80 to 100, with additional labour bringing that to 200 to 250 during the summer construction season. The company has numerous projects on the go. Currently, the 40-ton and 45-ton Bell trucks are being used on the expansion of a lagoon for the town of Pilot Butte.

As Allan Construction became more focused on earthworks projects and moving its own dirt on large contracts, the company found it needed a new approach to trucking material, Kevin A said.

Efficiency is key on these kinds of jobsites, and when moving massive amounts of dirt, that efficiency has come in a large part from their fleet of Bell ADTs. Combined with a long-term relationship with Bell dealer Wajax, Allan Construction has found that these tough trucks can get the job done with a big difference on the fuel bill - and on the bottom line.

“Back in 2007, we were doing some work for a client, which turned out to be a large earthmoving project that didn’t work with conventional trucks…we were basically off-road. That took us into the articulated dump trucks,” he explained. “We rented just about every type of rock truck out there and put them to work on the same site. They were run under the same conditions, and we found the Bell trucks to be the most fuel efficient. That was, and still is, a big deciding factor.”

Allan Construction partner, Jody Materi, said there was a very distinct difference between the previous trucks the company had used and the Bell ADTs. “We rented those Bells and never looked back - they were using half the fuel as the ones we had, and they never broke down. They were just bulletproof,” Jody said. “We got nine litres per hour in the winter with those trucks. I was driving a (diesel-powered) pickup at that time, just driving around the site hauling people around, and I was using more fuel than the ADT per hour.”

That revelation drove Allan Construction to rent and purchase more Bell trucks, and that brought with it an expanded relationship with Wajax, the exclusive Canadian dealer for Bell. Kevin Haberman (Kevin H), Service Manager with Wajax in Saskatoon, said the two had worked together previously with purchases of Hitachi excavators, and when Bell came into the Wajax fold, Allan Construction came to them for support. “They had a previous fleet of older Bell ADTs, and when Wajax became the exclusive Bell dealer, Allan Construction relied on us for parts and service.”

David McKie, Wajax Product Manager: Construction, explained that in 2017 Allan Construction wanted to modernise their fleet. “They were growing and taking on larger earthworks projects,” David said, “they were looking to increase their production, decrease downtime and lower their operating costs.” The Wajax team worked with Allan Construction to demonstrate the features of the new Bell ADTs, which led to the purchase of B30Ds, B40Ds, B45Es and B50Ds.

With years of experience on the Bell trucks, Allan Construction’s in-house mechanics can handle most of the maintenance that the machines require, Jody related. “Our mechanics love these trucks - we’ve gotten to know them quite well because we have so many of them. As far as simplicity, wiring, things like that, these trucks are easy to troubleshoot on the spot.”

“Wajax is all about ensuring its contractor partners don’t lose out on uptime,” Kevin H stated.

When there’s warranty or other repairs to be handled, the standing relationship with Wajax brings plenty of benefits, Kevin A noted, including a guarantee that they’re available 24/7 for emergencies and service work, no matter how remote or challenging the jobsite may be. “Any time we have to call them up, the dealership helps us out, without a doubt,” he added.

Fuel economy and ease of maintenance - with assistance from Wajax - are key reasons Allan Construction keeps buying Bell trucks. Their operators like the trucks as well, David pointed out, thanks to their modern cab design.

“The Bell cab is a safe and comfortable environment for the operator, with advanced features and controls to reduce the amount of effort required to operate the truck’s functions,” he said. Kevin A agreed, noting that new operators appreciate the design of the Bell cabs compared to other rock trucks they have operated previously. In the redesigned E-series cab the operator is seated in a spacious, sound-suppressed interior with ergonomically placed controls and a fully adjustable air suspension seat, with auto height and weight adjustments. Truck functions are controlled through the easy-to-reach sealed switch module, and a 10-inch colour monitor provides live feedback on operating conditions such as payload utilisation, fuel economy, grade and slope of the haul road.

“All of our Bell trucks come standard with a load management system that communicates valuable production data from the truck to the user’s dashboard,” David said. “That payload information is shown by the hour, shift and cycle, and provides a clear picture of the truck’s fuel consumption per ton of material moved. This information can be vital in providing an accurate representation of the user’s operating costs, to help with future bids.”

Fleetm@tic® also helps improve efficiency on the jobsite, monitoring the time each truck spends on various sections of the haul road, he noted. The system alerts operations staff of inefficiencies - for example, if the truck is idling too long waiting to be loaded, indicating the loading unit may be too small.

Thanks to a successful history of well-managed projects, the Bell ADTs that provide a strong backbone to its equipment fleet, and the solid support of its Wajax partner, Allan Construction is sure to be a fixture on the Saskatchewan contracting scene for the long haul. 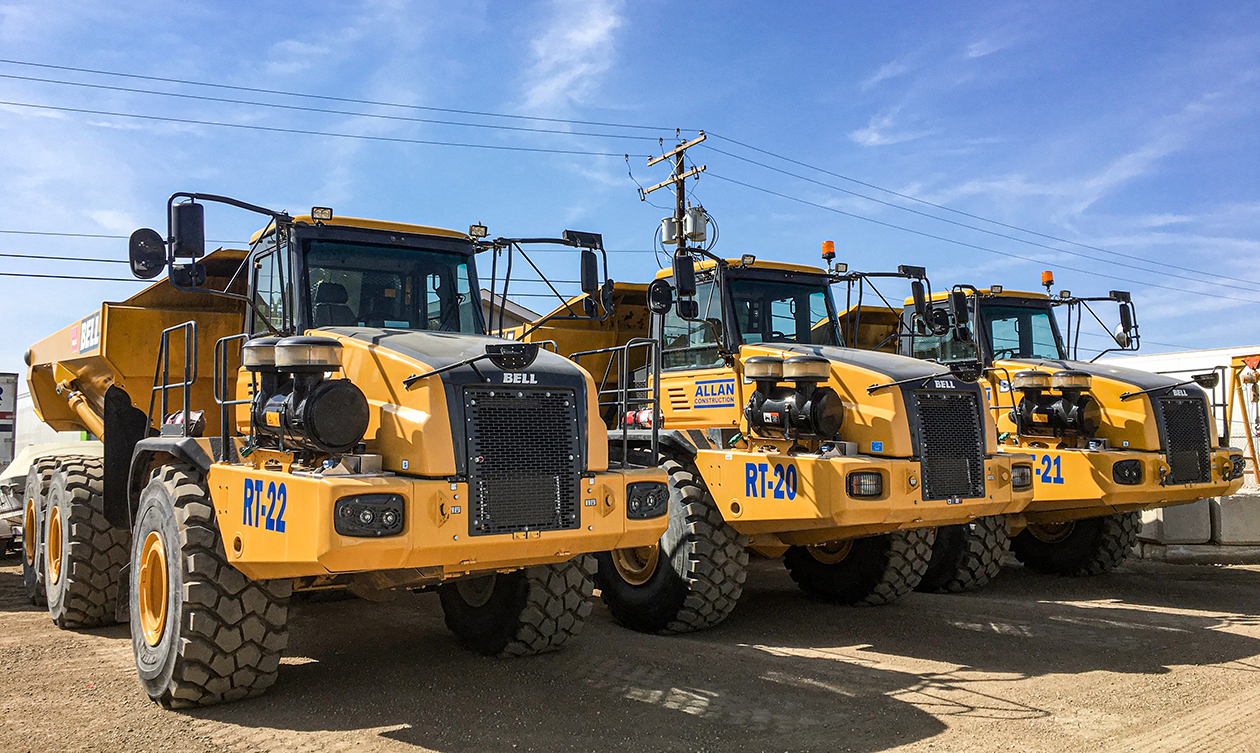 Allan Construction has found that these tough Bell ADTs can get the job done with a big difference on the fuel bill – and on the bottom line. Wajax is all about ensuring its contractor partners don’t lose out on uptime.