Since establishing in 1947, Blurock Quarries has made an indelible mark on the town of Estcourt in the KwaZulu-Natal Midlands. Its opencast pit has become a defining landmark over the decades but, more importantly, the company has established itself as a valuable contributor to the local economy supplying aggregates to support infrastructure development and providing much-needed employment.

Critical to its sustainability, the company continuously looks at ways in which to operate more safely and efficiently. It is for this reason that Blurock Quarries took delivery of a Finlay TC-80 Tracked Conveyor, after the company’s Chief Executive Officer, Jeremy Hunter-Smith, saw the unit in operation at the Bell Equipment customer open days at the end of 2019. We caught up with Jeremy to hear how the machine – the first one in South Africa – has settled into Blurock’s operation.

According to Jeremy, the company had been looking at a stacking conveyor for several years, trying to see where it would best benefit the operation. “We had a good relationship with Paul Chappel from Finlay, interacting with him through Finlay and the Institute of Quarrying, so when he presented the machine to us at the customer open day we said to ourselves that now is the time. Seeing it work, we should’ve bought one four or five years ago. For anyone manufacturing base and subbase products out of a mobile plant it should be a standard part of the kit,” he enthuses.

One of the main benefits has been freeing up a wheeled loader. “With mobile crushers the conveyors are always close to the floor so you need a permanent wheeled loader in the area, which means fuel burn as well as the risk involved and the interaction with the lower conveyors and people moving around the plant,” he explains. “In the same application our TC-80 uses a meagre 3,5l/hr compared to a wheeled loader that burns 15l/hr. Now with the conveyor, our wheeled loader works half the time. It’s not having to feed a machine plus then take product away. Now it only feeds the mobile plant and we can utilise it to load customers’ trucks when before we would need to bring in an additional loader. It contributes hugely to efficiencies in each section of our mobile crushing operation.”

The TC-80 has also proved versatile. It was initially earmarked to work on base and subbase materials – G7, G5 and G2 – that are manufactured out of the mobile plant. “When it arrived, we put it on our G5 production, where it worked perfectly. When we stopped that line the guys were keen to utilise it at our wash plant because they could see the advantage of it, so it moved straight to our wash plant creating the same time and cost benefits. Then we ran into another snag when our static primary went down and the guys put their heads together and said they’ll use the stacker to directly feed one of our static crushers. We limped along but we were able to get product through. We brought the product to the stacker so it could feed our secondary section on the static side. Its versatility has been unbelievable. The next day it was back to the wash plant again to carry on work there. That is the advantage of mobile plant, and the adjustable height is useful too.”

Jeremy admits that one of his concerns was the segregation of product from the conveyor but with the adjustable height this isn’t an issue and Blurock is able to build a much larger stockpile with the TC-80 than those that are under the conveyor belts on its mobile equipment. With a discharge height of 10m, the TC-80 can supply 300t/hour and is therefore more than capable of handling the 150t/hour production rate on the mobile plant.

The mobile plant includes a Finlay J1175 Jaw Crusher that feeds into a Finlay C1540RS Cone Crusher, and two Finlay 694 Triple Deck Screens, which were bought with load shedding in mind. While this is no longer a factor, as the local municipality is proactive in working with its large power consumers to reduce demand when necessary to avoid load shedding, Blurock Quarries enjoys the flexibility provided by these machines.

In addition to the Finlay Conveyor, Blurock took delivery of a Kobelco SK500HDLC-8 Excavator and a Bell L2106E Wheeled Loader, both of which are fitted with rock buckets, auto greasing systems and reverse cameras.

The Kobelco is Blurock’s primary production machine that feeds rock from the muck pile into a fleet of Bell ADTs that deliver the rock to the static and mobile plant. Jeremy says: “With the excavator, we were looking at a smaller machine but when we did our studies again, we realised we needed the larger machine. We weren’t happy with the fuel consumption on the competitor machine that we own, so we bought the Kobelco. It is considerably more fuel efficient at 28l/hr compared to the 33l/hr of our previous machine, which has worked out well for us in terms of having the productivity of the larger machine and the fuel saving. It’s a quiet machine and the ergonomics are great. It also came standard with protectors on the front screen and top of cab.

“A 40t machine would have to work all day to supply product to the static and mobile plants whereas now we have a portion of the day where our Kobelco can be used to remove overburden because it’s so efficient. We’re really chuffed we did the stats to make sure we bought the right size machine for our operation.”

Commenting on the new Bell Wheeled Loader, Jeremy says that Blurock previously operated two Bell L2606E machines. “We ran two because we always had one in the quarry pit itself loading certain products from the muck pile but we’ve realised that it’s not cost effective and to rather utilise excavators, which are made for that environment. Tyre damage running into the muck pile was the main challenge.

“Now we have one L2606E loading interlinks and the Bell L2106E, which is dedicated to our wash plant, to handle the washed product. We opted for a smaller machine because the maintenance and fuel burn are less. The L2106E uses only 15l/hr while the L2606E, being a larger machine, uses 20l/hr. Choosing the L2106E was a no-brainer because we already have one that moves and loads product from the mobile crushing string so it made sense to have common filters and other parts to keep on site.”

Another example of Blurock streamlining its fleet for greater efficiencies is how the company replaced its ADT water tanker and a tractor pulling a small fuel bowser in 2017 when it took delivery of a Bell 1214AF Haulage Tractor and a purpose-built trailer. The trailer, manufactured to specification by Engineering Top Tech in Richards Bay, has a 3 000l diesel tank to enable the rig to refill mobile plant on site and a 16 000l water tank for carrying out dust suppression duties on haul roads. Fitted with a fully enclosed ROPS/FOPs cab, strobe lights and a water cannon, the tractor-trailer also serves as the company’s firefighting equipment.

With the quarry having a lifespan of 80 years, Blurock Quarries is determined to continue moving with the times, making use of modern technology and newer machines with lower fuel burn and improved safety features. It has adopted full electronic blasting and changed its drill pattern in order to fulfil the operation within the legislative requirements. Four female ADT operators and a female crusher operator are onboard as part of the South African Government’s drive to involve women in core mining activities.

Indeed, Blurock Quarries has come a long way from its formative years when a railway line and small wagons called cocopans transported the rock to the plant, and wheelbarrows and manual labour were used to form stockpiles of product. 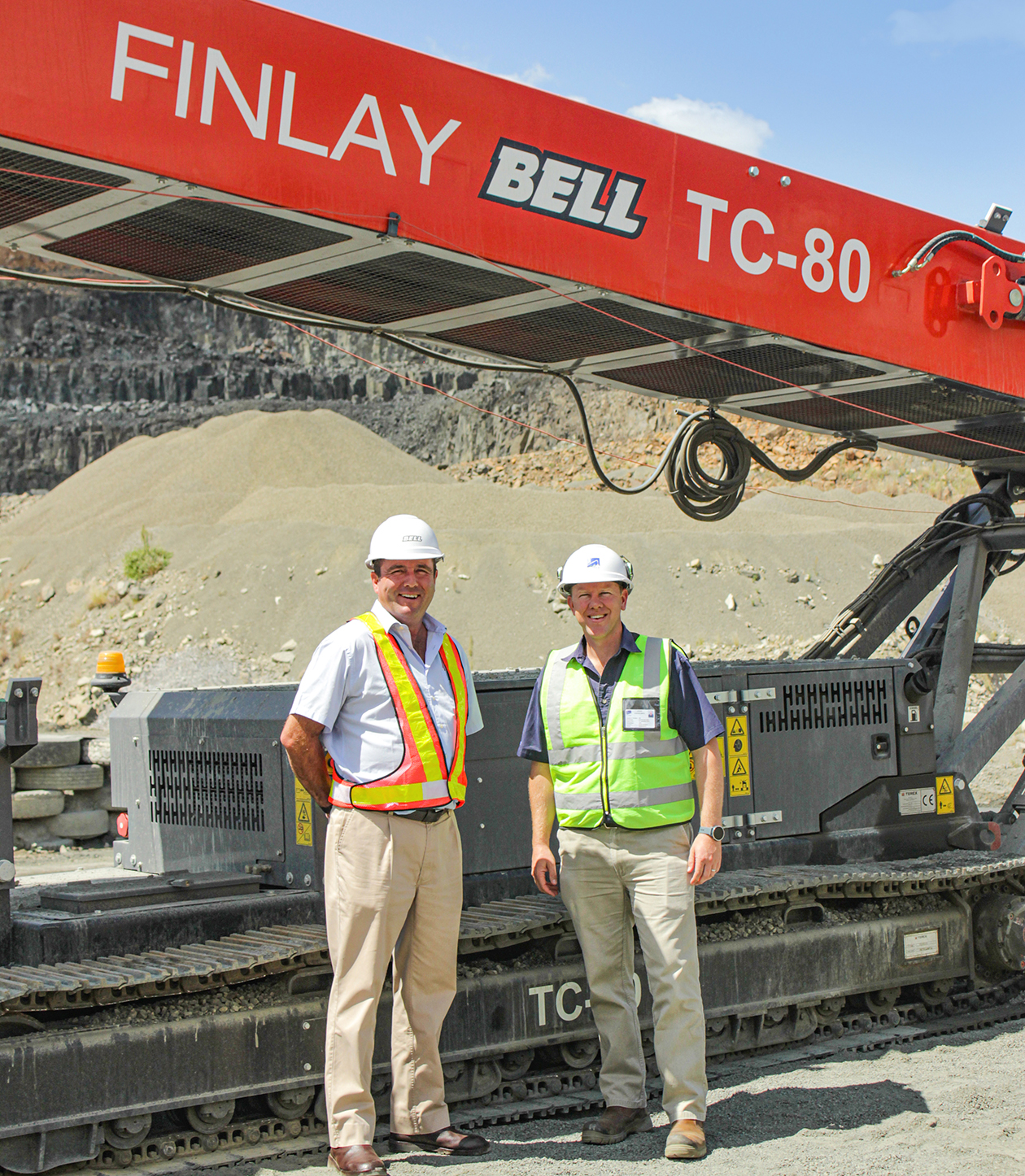 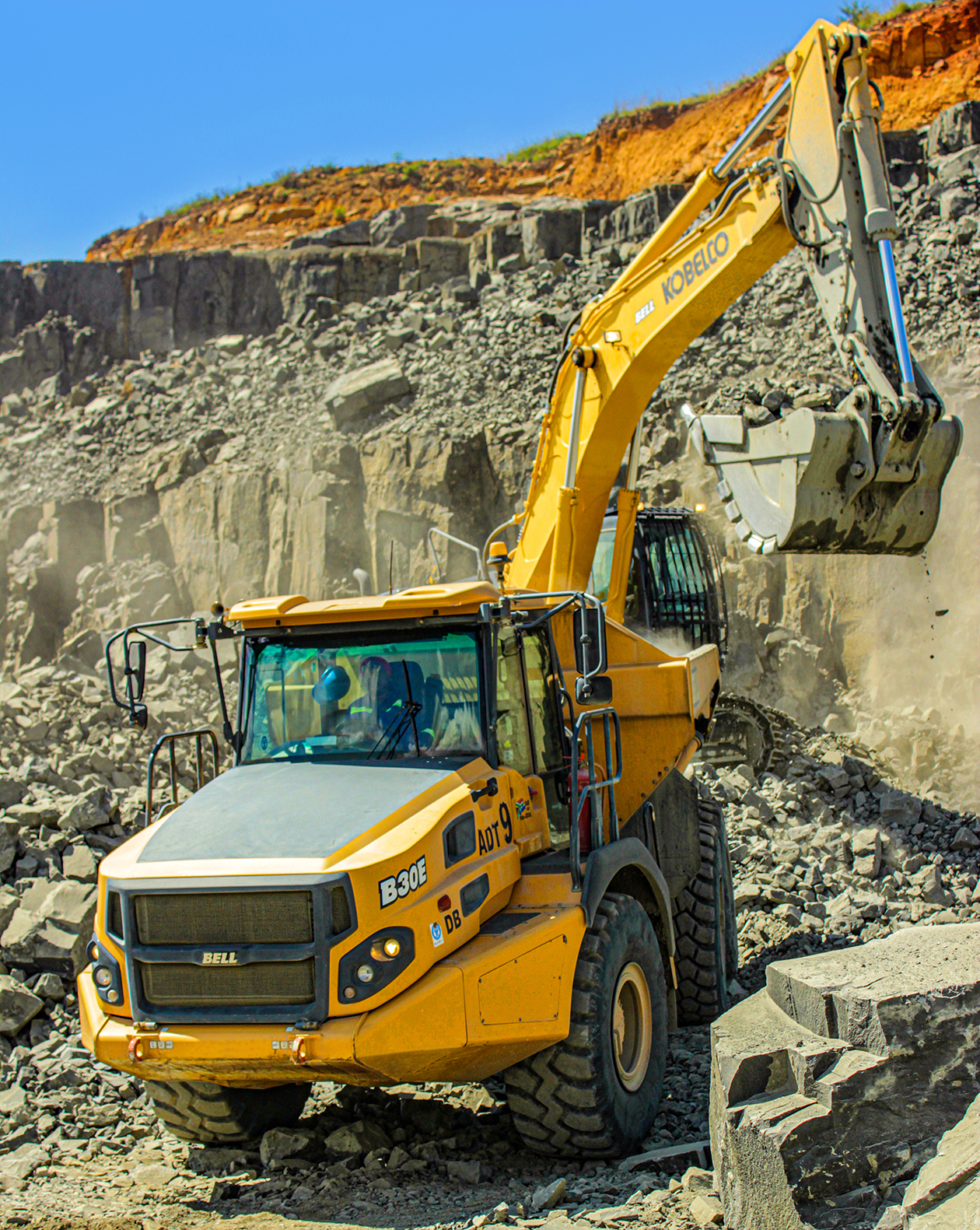