Implementation of Phase II of the Lesotho Highlands Water Project (LHWP), one of the world’s most successful trans-boundary water resource management schemes between the governments of Lesotho and South Africa, continues. Equipment manufactured and sold by Bell Equipment is being used at the forefront of this project.

In the early 1980s, when the viability was assessed, the LHWP was determined as the most economically viable inter-basin water transfer solution to meet increasing water demand in Gauteng, given that South Africa is a water-scarce country. Through a series of dams and tunnels, the LHWP was envisaged to ultimately transfer a total of 70 cubic metres of water per second northwards towards the Vaal River system in Gauteng and utilize the water delivery system to generate hydropower in Lesotho.

The water transfer component of Phase II of the project comprises of the construction of the 165m high Polihali Dam in the Mokhotlong district of Lesotho. It will be a concrete faced rockfill dam (CFRD) with the capacity to hold 2,2 billion cubic metres of water. The second feature is a 38km water transfer tunnel which will be constructed to transfer water from the Polihali Dam to the existing Katse Reservoir.

The second major engineering component of Phase II is hydropower which will increase the quantity of electricity generated in Lesotho and is a further step in the process of securing an independent electricity source for this landlocked, mountainous country.

As with any large and remote project, the first major challenge is to provide reliable access to the various construction sites and this particular project has an added curve ball to it. A very large tunnel-boring machine (TBM) has to be brought onto the site, which is situated at an average altitude of 2 300 metres above sea level. The tunnel that will connect the new Polihali Dam with the existing Katse Reservoir will be six metres in diameter and that gives one an idea of how big this piece of advanced machinery is.

The Polihali Western Access Road (PWAR) is a new road being constructed as part of the Phase II roads infrastructure. The road will tie into the Northern Access Road (NAR) which provides access to the Katse Dam basin between Leribe and Katse village, through Pitseng. The two roads join at Ha Seshote and will provide a further link to the proposed Polihali Dam basin for the TBM and transporting of other equipment.

The Polihali Western Access Road project is split into two sections, the East and the West. Rumdel Cape, a well-known construction company specializing in roads and headquartered in East London, is responsible for the construction of 33,5km - the longest section of the access road.

We asked Rumdel Cape’s Plant Manager, Derick Smit, what led to equipment from Bell Equipment being involved in the project. “You will know that Rumdel Cape has a long history with Bell Equipment and especially the company’s Articulated Dump Trucks (ADTs) that we’ve run to very high hours,” he says. “We have Bell B20D ADTs that date back to 2003 and 2007 with some reflecting 26 000 hours of reliable service and despite those massive hours, have not been rebuilt.”

“We had until recently owned a fleet of 13 Bell B25D ADTs and four Bell B20Ds. Despite them being so reliable and us seriously considering rebuilding some, we thought that with this exciting new project to complete, and for future projects, buying some newer models made for sound thinking. We may consider rebuilding some of our Bell ADTs in the future.”

By their own admission, Derick and his colleagues researched the entire ADT market but, due to the longevity and reliability of their Bell ADTs, decided to stick with the Richards Bay marque. Rumdel Cape sold four older Bell B25D ADTs out of hand and bought four new Bell B25E 6x4 ADTs along with a Kobelco SK380LC-8 Excavator.

“From a cost saving point of view, buying Bell B25E ADTs with 6x4 traction made sense to us and even under full loads at that altitude the trucks are doing really well,” Derick says. “If you consider that because of the high altitude, diesel engines are expected to drop between 10 to 15% in performance, these Bell B25E 6x4 ADTs are hauling blasted rock from cuttings up and down some pretty steep hills and doing so with ease.”

This is the nature of this challenging project where, according to Johan Human, Rumdel Cape’s Project Manager on the site, the company has during the 23-month contract period been tasked with moving 1,3 million cubic metres of material to construct only its section of the access road and of this, 1,1 million cubic metres will have to be blasted in order to move it. Another challenge is that of countering constant high winds that kick up dust and with about 5km of the road site being above the snow line, snowfalls at any time of the year are a constant threat to safety. Both Johan and Derick don’t consider snowfalls to hamper the progress of their Bell ADT fleet in meeting their production targets.

“We’ve been impressed by the countless safety features of the new Bell B25E ADTs,” Derick continues. “The first feature that comes to mind, which is particularly applicable to safety on the LHWP, is that the truck won’t tip if it stands at an angle that differs more than nine degrees from horizontal. Other features such as anti-rollback, a park-brake that kicks in timeously and the ‘i-tip’ feature all help to make our operations safe.”

“Another feature that we enjoy is the Fleetm@tic® monitoring system that gives us accurate figures on cycle times, loads carried and fuel consumption which at this point varies between 8 and 12 litres an hour, figures that are well within our budget.”

Derick, a professional mechanical engineer, explains the thinking behind their decision to acquire a Kobelco SK380LC-8 38-ton Excavator, which is the first such machine in Rumdel Cape’s fleet. “An adequate loading tool for our Bell B25 ADT fleet would probably have been a 30-ton machine but as we’re confident of the Kobelco’s longevity and thinking ahead to future work, we’re pleased with the slightly larger capacity,” he says and with a smile adds: “Sporting a vivid turquoise colour, it’s also a lot closer to our own corporate colours!”

“Our long-term thinking is that we’d like to have one supplier for both excavators and haulage tools and that is what we’re now achieving with Bell Equipment supplying both Bell ADTs and Kobelco Excavators. We believe that this will make maintenance and spares acquisition easier as we’ll be dealing with one supplier with whom we already have an established relationship.” 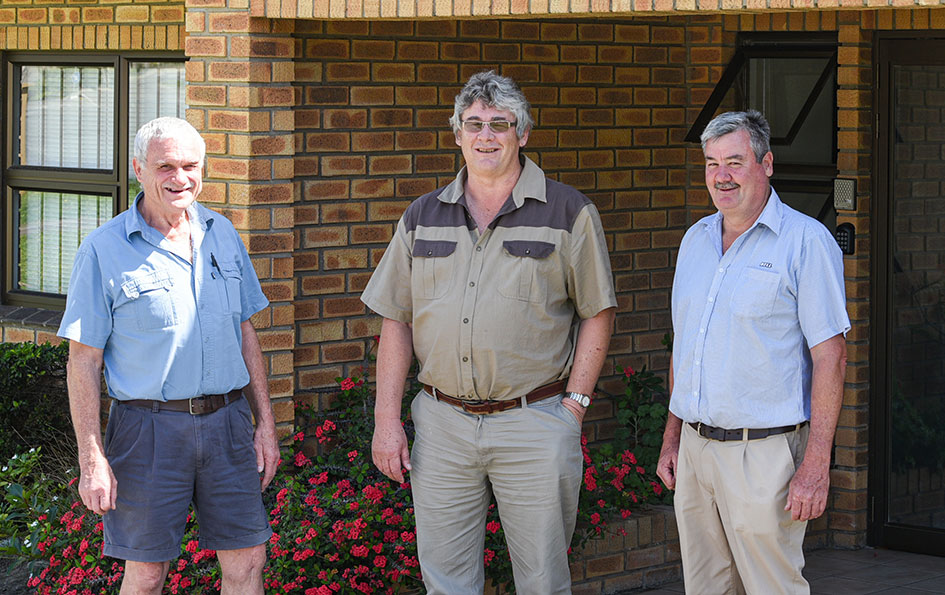 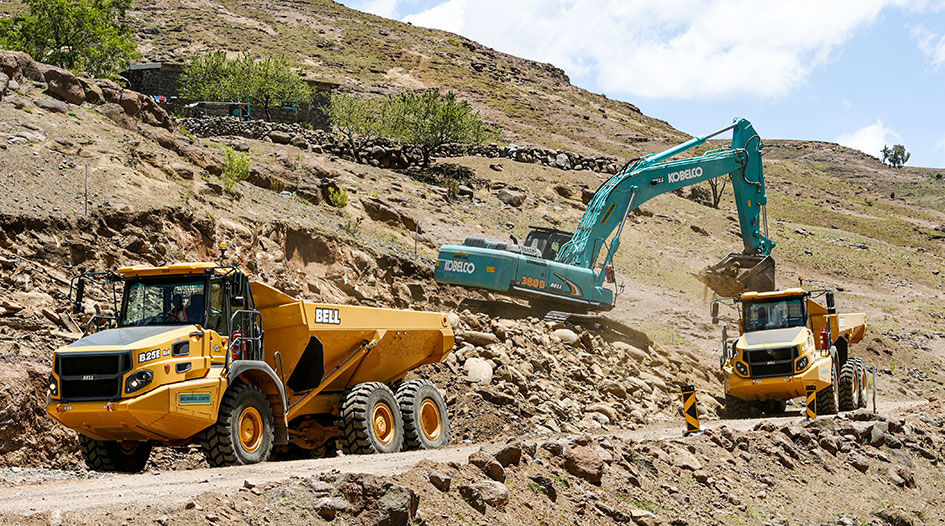