A great river that flows not into the sea but into the middle of the Southern African continental landmass, the Okavango Delta, is more correctly termed an alluvial fan comprising of areas that are permanently flooded, seasonally flooded and occasionally flooded.

This flooding happens mostly between March and June each year as water floods down from neighbouring Namibia and during this phenomenon, the water attracts thousands of animals, so creating one of Africa’s greatest concentrations of wildlife. And where you have wild animals, you’ll have people coming to look at them and so tourism in this most special corner of Botswana flourishes.

Many tourist lodges in this area have private airstrips as it’s by air that many tourists prefer to arrive and leave. These airstrips are mostly built of gravel and every few years, they have to be rehabilitated to counter the effects of long, hot summers, occasional flooding and being trampled by many big and small hooves as fences don’t exist here.

Now you may ask, who gets to work in this pristine wildlife paradise of the world, doing construction, bulk earthworks or even plant hire? Enter Jan Steyn and his company Shumba Plant Hire. ‘Shumba’ is the Swahili word for a lion and Jan Steyn knows all too well that despite the beauty of the area he plies his trade in, a brave and strong heart like that of a lion is needed to fulfil the wishes of his clients in this area.

“We’re based in Maun, the nearest major centre to the Okavango Delta and besides plant hire we also undertake civil construction, bulk earthworks, bush-clearing and the installation of basic services such as water reticulation and sewerage,” he says. “Recently we’ve started doing civil works for the erection of electricity pylons on a sub-contracting basis and this and building haul roads for a nearby mine, has added to our bouquet of services. And then of course there are the numerous airstrips that need pretty constant attention for no tourist likes to land on a bumpy runway.”

Jan is ably assisted by his wife, Leandré, who handles the all-important administration and finances in the business.

“I have always worked in construction and when we bought Shumba Plant Hire from the previous owner some years ago, we had three Bell B20C Articulated Dump Trucks (ADTs) included in the deal,” Jan explains. “We have admittedly swapped out some engines and transmissions over the years but the ‘never say die’ attitude of these machines has astounded us and our clients, and our oldest Bell B20C ADT has now done over 45 000 hours.”

Jan has steadily added to his Bell Equipment-dominated fleet over the years buying some machines on the used market and many new ones from Kanu Equipment, Bell Equipment’s official dealer for Botswana, in Gaborone. “Bruce Paterson, Kobus Bezuidenhout and their enthusiastic staff have always treated us as if we were their biggest customers and we think we’ve reciprocated by supporting them,” Jan smiles.

“We at times work very remotely but despite this, we can talk to anyone at Kanu Equipment at any time, no matter where we are, as Bruce and Kobus encourage open lines of communication, which we appreciate as it makes light of some of our challenges.”

Jan goes on to quote an example of when he was recently faced with a daunting bulk earthworks challenge in a remote area. He knew the only machine that could get the job done was a new Bell 770G Grader and he didn’t have one yet. “I called Bruce from the bush and bought a new Bell 770G Grader on the phone which goes to show the type of relationship we have with Kanu Equipment.”

“This machine was added to our existing fleet of Bell Graders, consisting of a 770CH and 670D model respectively,” he says. “Our trust in the Bell Equipment marque stems from our belief that it is equipment that was designed and built in Africa for African conditions and having the good folk at Kanu Equipment to back this great product makes it all worthwhile.”

The same can be said of two Bell L2106 Wheeled Loaders that Shumba Plant Hire owns, with the older D-model bought on the used market and its performance prompting Jan to invest in a new Bell L2106E model bought from Kanu Equipment. “We’ve also added what we believe are versatile workhorses in a Bell 1734AF Tractor that hauls a large variety of rollers, water bowsers and trailers and a Bell 315SL Tractor Loader Backhoe that our various construction teams fight over to have on their sites for almost any job at hand.”

A Bomag BW212 D-40 Single Smooth Drum Roller has proved invaluable for the many projects that demand decent compaction the first time around, such as the gravel airstrips.

“You should remember that the terrain where we often have to work consists of water and water and more water as far as the eye can see,” Jan tells us. “This makes for some interesting logistics in moving equipment around as at certain times of the year we drive in rivers that just weeks before had been regular dirt roads.”

A recent foray into sub-contracting for a powerline concession company has seen Shumba Plant Hire take delivery of a Kobelco SK260LC-8 Excavator, which was also bought new from Kanu Equipment. “This machine with its massive 187kN breakout force and 1,4 cubic-metre bucket has really impressed us and our clients. Its fuel burn, considering what it does in preparing foundations for electrical pylons, is amazing,” Jan adds. “We’re the first to admit that we put our earthmoving equipment through the proverbial mill but having access to the great choice of equipment offered by Kanu Equipment, coupled with proven reliability that Bell equipment delivers, plus superb technical backup and parts, we’re here for the long run, in water or on dry land.” 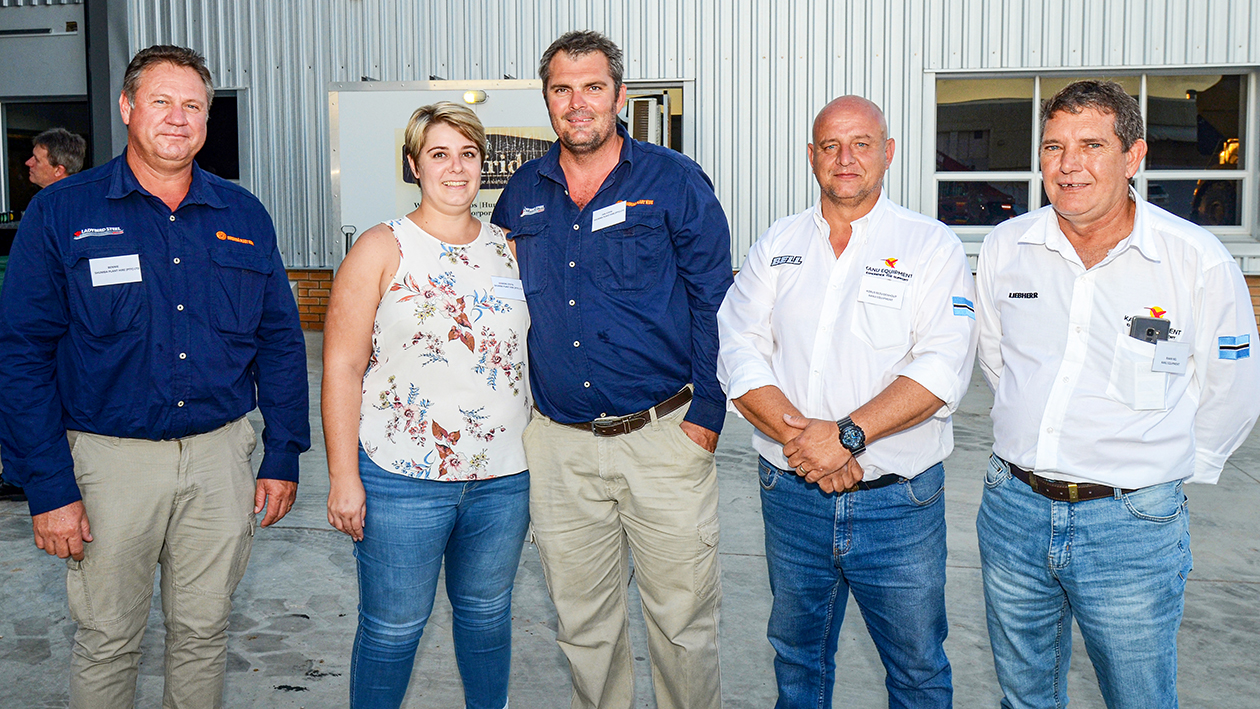 From left to right: Bennie Schoeman, Leandré and Jan Steyn, all from Shumba Plant Hire, with Kobus Bezuidenhout and Riaan Nel from Kanu Equipment. 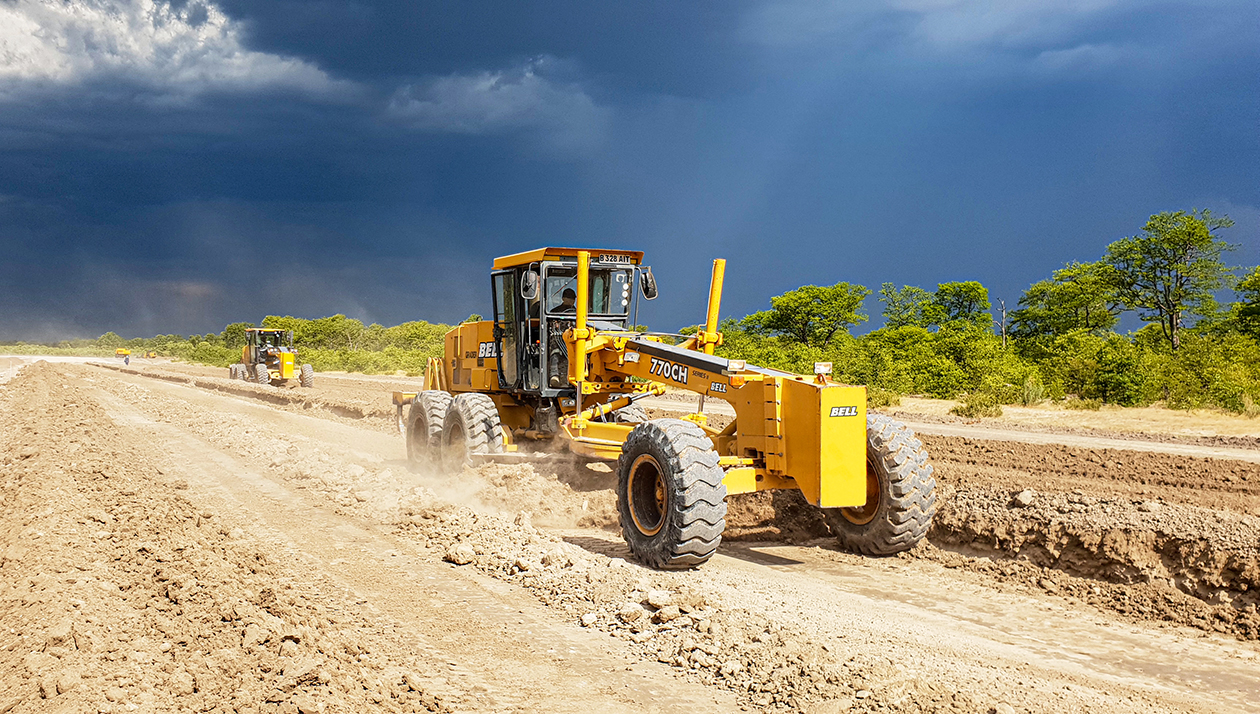