“When crushing and screening even low-grade iron ore with its specific gravity of around 3,3 you need the robust design and build of a Finlay Screen to get the job done properly.”

This was said not by someone in the marketing department at Bell Equipment, the southern African distributors of Finlay equipment, but by Shaltoe Watkins, Senior Manager: Plant for B&E International, the multi-disciplinary crushing, contract mining, material processing and engineering group. And he should know as since 1994 the company has owned approximately 50 Finlay Screens and Crushers across the entire range.

“We pride ourselves on tailored solutions for crushing and screening, mineral processing and engineering services, quarry services and opencast mining,” Shaltoe says. “Our plant, equipment and our experienced personnel are deployed all over South Africa and in neighbouring countries.”

Recently B&E International won a tender to process low-grade iron ore for a major mine near Kathu in the Northern Cape. The tender called for the contractor to use a mobile double-deck screen that would be fed from a jaw crusher to produce predominantly coarse and very fine material with a lesser amount of material that could be used for stemming, which means filling the tops of drilled holes that have been charged and primed for blasting.

“After consulting Bell Equipment’s knowledgeable Sales Representative, Sascha Caixeiro, we decided that the Finlay 893 Double-deck Screen would best suit our purposes, first on this contract and looking ahead,” says Andrew Bowles, B&E International’s Contracts Manager. “We felt the Finlay 893 Screen was very competitively priced and with our inhouse financing in place we could place the order in December 2020 and the machine was delivered promptly in January 2021, which allowed us to commence work almost immediately.”

The top deck has punch-plates that produces material of -30mm to +15mm and the bottom deck contains a wire mesh with 15mm apertures. “On this contract and in keeping with the guidelines of our client, we work during daylight hours and the split in material sizes is 45% coarse, 45% very fine and 10% of a size suitable for stemming,” Andrew explains. “We currently have the Finlay 893 Screen producing between 450 and 500 tonnes of processed material an hour which is way below its design capacity, but we’re limited by a quality control factor as determined by our clients.”

“Despite the challenges the comminution presents us with, we’re confident of getting three months of productive life out of the punch plates in the top deck and knowing that Bell Equipment has such a wide national footprint with strategically situated branches carrying spares gives us peace of mind.”

Considering that the dense and abrasive iron ore will place strain on any mechanical handling equipment, both Andrew and Shaltoe have been impressed by the Finlay 893 Screen’s relatively frugal fuel consumption of 12 litres an hour.

“Further to what Andrew said about Bell Equipment’s technical backup, I should add that our faith in the products that Bell Equipment sells is evident as recently we took delivery of two new Kobelco SK850LC 85-ton Excavators,” Shaltoe adds. “We had sold off some older equipment during the slump that was caused by the pandemic and once business started picking up we needed these excavators in a hurry. Bell Equipment to its credit had stock at a very competitive price.”

It wasn’t merely a case of buying at first sight as Shaltoe expands on the purchase: “We had looked very carefully at the specifications of the Kobelco SK850LC Excavators and the machine’s reach, breakout force and cycle times were all in the exact ballpark of what our requirements were and then some,” he says. “The standard, general purpose bucket carrying an almighty 5,1 cubic-metres also impressed us and our colleagues on the various sites where the machines have initially been deployed have expressed their extreme satisfaction with this.”

Shaltoe believes that when needed, this larger than normal bucket will really earn its keep when feeding mobile crushing and screening equipment, and coupled with quick cycle times, will add greatly to lowering production costs per tonnes.

“We put the two Kobelco SK850LC Excavators to work almost immediately with one headed to the South Africa-Zimbabwe border post at Beit Bridge where it is being used in rebuilding essential infrastructure on both sides of the Limpopo River,” Shaltoe says. “The second Kobelco SK850LC was sent to Queenstown in the Eastern Cape where it immediately increased production rates in a quarry that provides building material for a host of housing and infrastructure projects in that area.”

“These are not the biggest excavators we’ve owned and operated but, while we concede that they are still brand new, we’re confident that what they bring to the party in terms of quicker cycle times, larger bucket size and all-round great performance will add a positive spark to our production rates.”

Initial fuel consumption figures hover around the 51 litres an hour mark in a challenging application. B&E International bought the two Kobelco SK850LC Excavators with standard warranties of 12 months or 2 000 hours and are in discussion with Bell Equipment to provide their own maintenance staff with some technical training to understand the machines better and so improve their longevity. 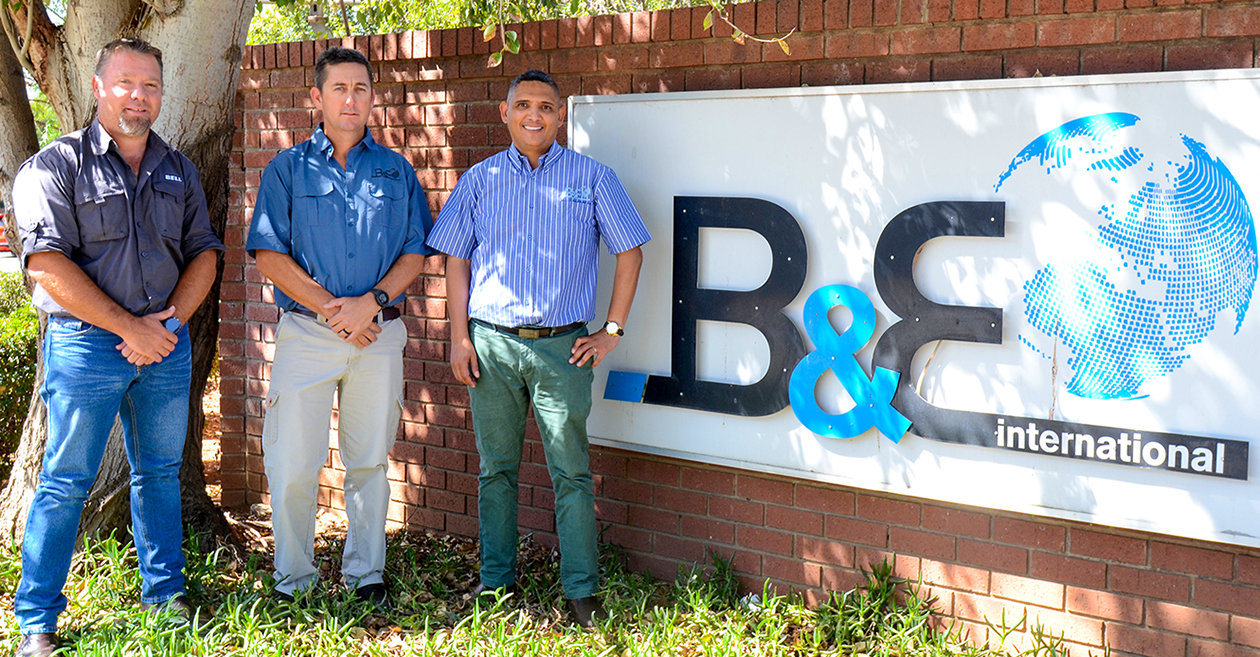