Bell Equipment has undertaken to build a specialised classroom at Thuthukani Special School next year, which would include a wider doorway and a ramp for wheelchair access, windows and lighting to cater for sight impaired children as well as an area for autistic learners to have their own secluded space.

Thuthukani Special School caters for over 400 children from multicultural backgrounds, aged between six and 18 years, who are intellectually disabled. The school has a waiting list of about 200 children, illustrating the dire demand for such a facility in the community.

Bell Equipment Group Human Resources Director, Johan van Wyngaardt said that Bell, as a family-orientated business, would like to build a long and sustainable relationship with Thuthukani where the school and the community can rely on Bell and in return Bell can see how its investment develops and make a meaningful difference to a worthy cause.

Earlier this year Bell Equipment spent a substantial portion of its corporate social investment budget on uplifting the hygiene standards and dignity of students at Thuthukani Special School outside Empangeni by revamping four bathrooms on the property. The company also sponsored five of the school’s volunteers to further their studies during 2018.

Johan and Bell Commercial Projects Manager, Bongani Dlamini, visited the school recently to inspect the work, which included tiling the bathrooms, painting, installing ceilings and doors, replacing toilets and urinals as well as upgrading the plumbing.

“When we initially visited the school, we realised that if we want to contribute to the wellbeing of the children we needed to improve hygiene, which speaks to a person’s dignity, and we decided to improve the bathrooms. After almost a year of service it’s pleasing to see how well the bathrooms have been maintained,” said Johan.

Thuthukani headmistress, Marthie Combrinck, said they are hugely appreciative of the project as the bathrooms form an important part of the school curriculum. “Some of our teaching is centred around the bathroom – teaching our children about the flushing system, which is foreign for those coming from the rural areas, as well as the importance of washing hands and what can be put in the toilet.”

She was also delighted at the news of a specialised classroom and said: “It has been a dream and there has always been need for such a facility at the school.” 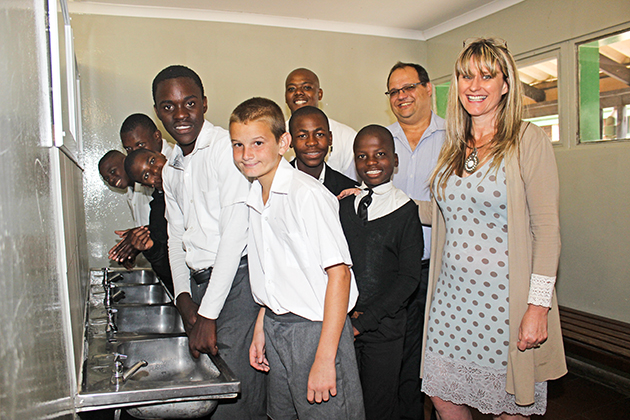