Two of the Eastern Cape Province’s larger municipalities merged in 1996 to create the Buffalo City Metropolitan Municipality, a move that brought prosperity but also a new set of responsibilities.

The two spread-out metropolitan areas comprising of East London and King William’s Town encompassed a host of smaller towns like the provincial capital Bhisho and Mdantsane, along with over 150 informal settlements, with a population of 835 000.

Buffalo City has, over time, built up a fleet of earthmoving equipment that comprises of graders, water tankers, tractor loader backhoes, rollers, excavators and wheeled loaders to go with an assortment of tipper and other trucks to provide its citizens with adequate services.

“This equipment is called on when paved and unpaved roads need repair and maintenance or especially when water reticulation infrastructure needs attention or repair. Rural roads with low-water bridges and culverts demand maintenance, especially after heavy rains,” says Mbulelo, who adds that the equipment also helps with the clearing of illegal dump sites and at cemeteries.

“We manage temporary and solid waste dumps and cemeteries and, as a result, an urgent need was identified early in 2018 to source more tractor loader backhoes to better manage illegal dumping sites and the many cemeteries in the municipal area,” he explains.

According to Mbulelo, an RT57 Transversal Contract was issued by the National Treasury instead of a normal tender for supply of this equipment. Such a bid to supply is adjudicated according to criteria of the Preferential Procurement Policy Framework Act with 80% of the bid adjudicated on price and the other 20% on the supplier’s Broad Based Black Economic Empowerment rating.

Bell Equipment was awarded upon adjudication to supply five Bell 315SL Tractor Loader Backhoes (TLBs) and hydraulic hammers for the backhoes were retrofitted during July 2018.

“We were very pleased to receive these five Bell TLBs and they were put to work immediately to clean up illegal refuse dumping sites,” he says. “We identify where such dumps exist and then send out a team with a Bell TLB to load the illegally dumped waste onto a truck for removal to our solid waste site near Berlin, on the way to King William’s Town.”

“The hydraulic hammers on the Bell TLBs have proved to be very useful when digging graves in the hard calcrete that we sometimes experience in these areas,” he adds. “Providing graves may seem an eerie subject to discuss but at the end of the day it is part of our mandate to retain the dignity of the deceased in our midst.”

“We do however have an urgent need for more machines such as the Bell 315SL TLBs and we will certainly request more during coming financial terms,” Mbulelo says. “Although we believe that Bell Equipment provides us with user-friendly equipment that is easy to operate and maintain, we would like to tap into the company’s training programmes for both operators and maintenance personnel to ensure proper care of the equipment. Longevity of the equipment is important to us.”

He is adamant that their choice of the Bell 315SL TLB was the correct one as the machine’s power, all-wheel drive and versatility sets it apart from other equipment. With current fuel prices being higher than ever, the Bell 315SL TLB’s frugal fuel burn is an added bonus. 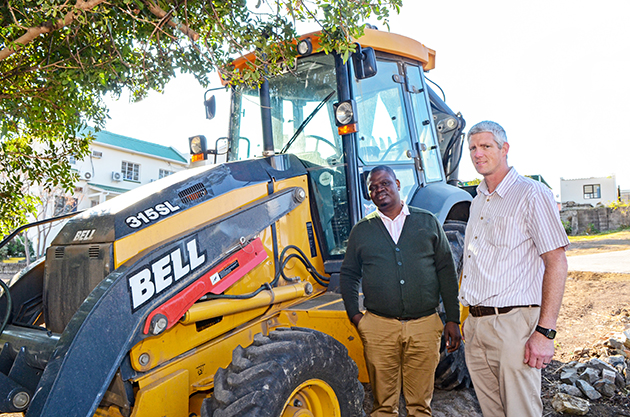 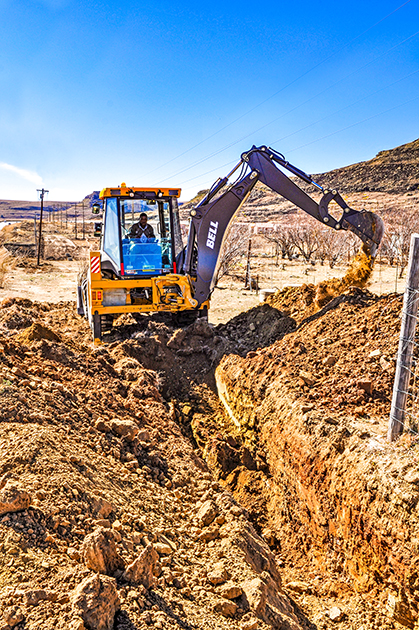