In a tough economic environment lowering the cost of production is vital whether it be in construction, mining, or agriculture. All these disciplines involve the use of mechanical equipment and one of the key input costs is that of fuel.

Burger & Wallace Construction (Pty) Ltd was founded by Terry Wallace and the late Martin Burger in 1988. Terry Wallace is still a director of the company that is now managed by Nick King, Paul Summers, Colin Budge, and Jason Keating, who form the executive team. The company has experienced sustained growth into what now can be described as a medium to large civil engineering and construction company with a recognised pedigree relating to a huge body of prestigious projects.

“We’re proud of the reputation we’ve built to bring in projects on time and on budget,” says Nick King. “Our approach has been to employ the right people and resources effectively to produce a quality end product.”

Burger & Wallace has kept pace with the changing corporate landscape and has created an Employee’s Trust that owns 30% of the company with subsequent profit sharing. In-service training is also prioritised and the company, which boasts a CIDB rating of 8CE, is a member of Tradeworld.

“Our projects range from bulk earthworks to upmarket housing estates, with low-cost housing projects in the mix as well,” Nick continues. “This has seen us working across the Northern and Western Cape from Springbok and Upington to George and Knysna, and has included roads and services.”

Burger & Wallace Construction has been recognised for its innovative construction methods like exposed aggregate roadways at the Croydon Vineyards and Olive Estates that saw the company receiving the Concrete Manufacturer’s Association Award.

“Employing the right resources also points to applying the correct tools for the job when it comes to our mechanised fleet. To this end we bought Articulated Dump Trucks (ADTs) from Bell Equipment in the early 2000s as we believed a Bell ADT to be better suited for working in bulk earthworks and off-road conditions,” Nick states. “Our first two Bell B17C and two Bell B20D ADTs had each given us well over 20 000 hours of excellent service before we converted them into 10 000 litre water tankers. We believed they still had a lot of life left and running with water tanks would extend this life even further due to lower hour utilisation and effectively lighter loads.”

Nick emphasises the benefits of a long relationship with an original equipment manufacturer and supplier such as Bell Equipment. Bell can be consulted when necessary and relied on for sustained technical backup. This happened in 2018 when Burger & Wallace Construction decided to sell three 25-ton tipper trucks and replace them with two new Bell B18E ADTs, which again were better suited for their off-road capability in bulk earthworks and civil construction projects. The fact that they were road legal for easy commutes between sites was a bonus and the Bell Fleetmatic® system helps to monitor their performance.

The company had a 21-ton excavator which had come to the end of its economical working life at between 12 000 and 14 000 hours. A large new development project was in the pipeline and it was thought to replace this machine with a new model of similar mass.

“Our friends at CSV Construction had recently bought a Kobelco SK210LC-8 21-ton Excavator from Bell Equipment and we took a close look at their machine and asked about its performance and especially its fuel consumption,” Nick explains. “On the strength of their experience and with the information given to us by our Bell Sales Representative, Fiona Johnson, we ordered a similar machine which was delivered in October 2019.

“Our Kobelco SK210LC-8 Excavator has been used extensively in bulk earthworks and in trenching for services on the new project and, despite working in deep clay, has returned fuel consumption figures of only 10 litres an hour, which is very pleasing. The machine has more than enough breakout force for what we require and its 1-cubic metre bucket moves good loads of soil whether trenching or loading tipper trucks. As the machine comes with external hydraulic piping, we may in time fit a hydraulic hammer to it.”

No bulk earthworks, services installation or roads construction project would be complete without proper compaction and for many years Burger & Wallace Construction has relied on Bomag Rollers for this, which were also bought from Bell Equipment.

“We construct roads through all the base, binder and wearing courses except the final paving which we contract out. Proper compaction up to that point is non-negotiable and we have our four Bomag 120, 212 and 219 Rollers to thank for this,” Nick adds. “We have a padfoot clamshell attachment on the newest Bomag 212 Rollers when working in clay and we rely heavily on these machines to deliver proper compaction.”

Mechanical equipment by its very nature needs to be maintained and Burger & Wallace Construction’s equipment, which is serviced and repaired by Bell Equipment, is no exception. Scheduled warranty servicing is done by Bell Equipment technicians out of the Cape Town branch. “Bell Equipment’s response times and parts availability has been very good for a long time and knowing that we can call on Kobus van Zyl and his team at any time is reassuring,” Nick says. “By the same token, when you consider that 11 machines out of our total fleet of 30 are from Bell Equipment, you can clearly see that we’re loyal to a brand and a company that delivers what it promises, much as we do.” 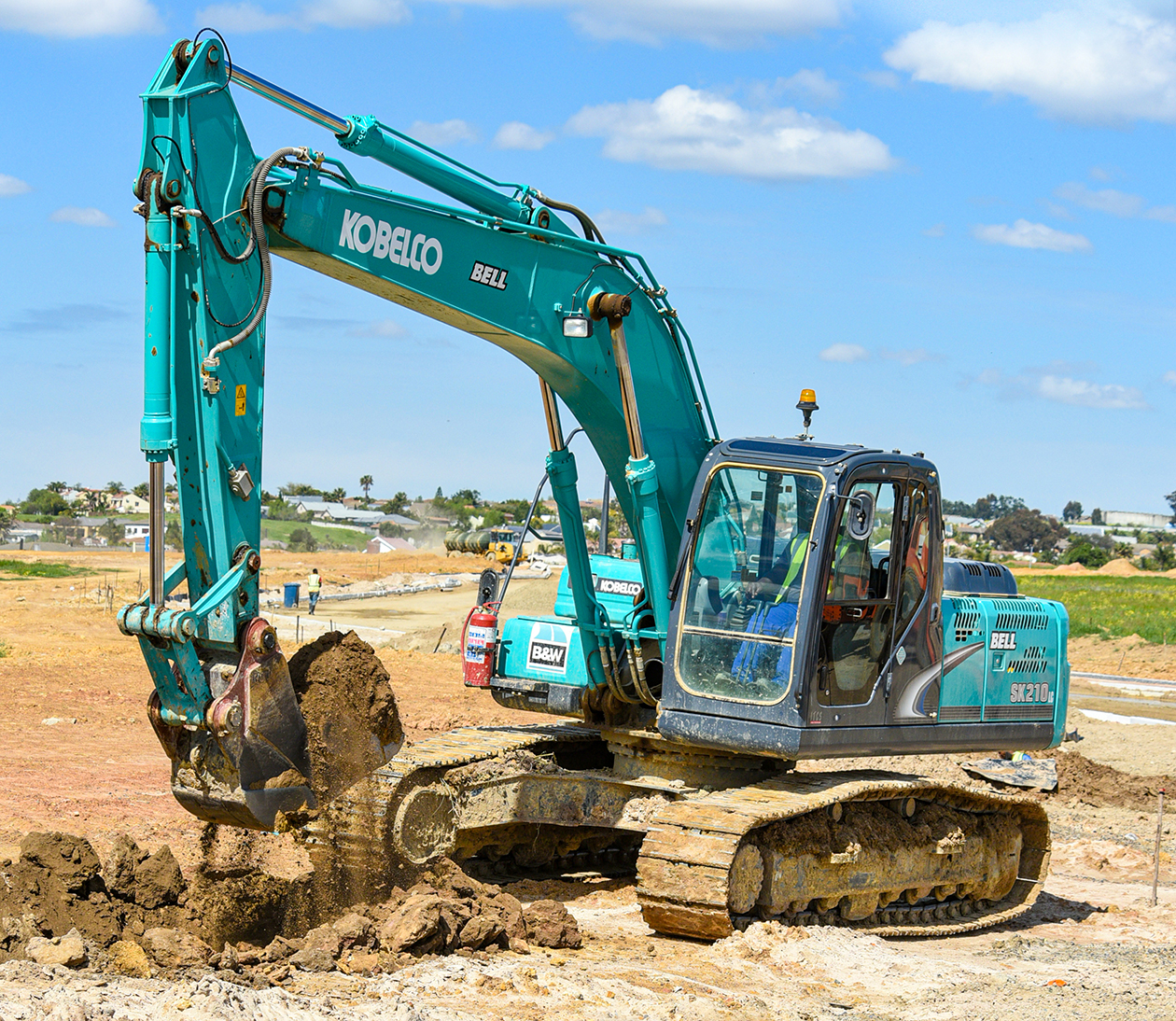