South Africa’s Eastern Cape province boasts a diverse landscape from arid Karoo plains in the west to mountainous and forested areas in the east. Despite the province’s three airports and three harbours, it is by road that most people access this picturesque holiday, business and agricultural destination.

The province has some 42 000km of roads, many of them asphalt but the clear majority is still unpaved. To ensure safe access for its citizens the Eastern Cape Department of Transport, under which road construction and maintenance falls, started to plan on replacing and augmenting its fleet of road construction equipment back in 2016.

Due to the relative urgency of the matter an RT57 Transversal Contract under the authority of the National Treasury of South Africa was issued. The contract was awarded to Bell Equipment in April 2016 but its validity was extended to September 2018. The delivery and official handover of the fleet of new yellow equipment was concluded by July 2018. The full order comprised of 12 Bell 670G Graders, 12 Bell 315SL 4x4 TLBs, 12 Bomag BW211-D-40 Single Drum Rollers and 12 Liebherr 920 Excavators.

“As the RT57 Transversal Contracts are issued and administered by National Treasury, many other original equipment manufacturers (OEMs) actually missed this one and only three OEMs reacted,” Bruce says. “The adjudication is largely done on price, which makes up 80% of the criteria and a Broad Based Black Economic Empowerment (BBBEE) rating which accounts for 20%. This is all done under the Preferential Procurement Policy Framework Act (PPPFA).”

According to Bruce, the PPPFA also states that to address the economic imbalances of the past, any state-issued contract over R30 million, must have an Exempted Micro Enterprise (EME) or a Qualifying Small Enterprise (QSE) involved to the extent of 30% of the total value. To this end Bell Equipment selected Key Spirit Trading as its EME/QSE partner to supply the rollers and excavators.

“At the time of tendering Bell Equipment still had a sales agreement with Liebherr and as a result Key Spirit Trading subsequently sourced Liebherr 920 excavators directly from that OEM,” Ndlela says. “The Bomag BW211-D40 Single Drum Rollers were sourced through Bell Equipment.”

While under warranty, the equipment will be maintained and serviced by mechanics attached to Bell Equipment Customer Service Centres in East London, Port Elizabeth and Mthatha.

During a ceremonial handover at Queenstown on 13 July 2018 the MEC for Transport, Safety and Liaison in the Eastern Cape, Ms Weziwe Tikana, said: “Our approach going forward is to ensure that we build our internal capacity to deliver on our mandate. Today we are handing over plant machinery (yellow fleet) worth a R100 million.”

“We are beginning to recapitalise our plant machinery and are gradually changing our operating model such that we spend 50% of our budget through private contractors and another 50% used by our in-house teams.”

“We are taking back our power to ensure that government truly delivers on roads using the financial resources allocated to us,” she said.

MEC Tikana reiterated the department’s commitment to develop SMMEs in the construction industry. She further said that her department’s priority will include roads that lead to areas of economic development and special focus will also be placed on the maintenance and construction of rural roads.

“It is a new dawn for the people of the Eastern Cape as we step up the gear to ensure that our people have accessible and safe roads.”

Cllr Nomakhosaza Meth and Cllr Nokuzola Tolashe, respectively the mayors of the OR Tambo District Municipality and the Enoch Mgijima Local Municipality, also attended the ceremony.

“As Bell Equipment, and I’m sure I can speak for our EME and QSE partners as well, we’re proud to be associated with the recapitalisation of yellow machine fleets for the Eastern Cape and other state entities across South Africa. We believe that as a proudly South African company we are justified as being the supplier of choice for these initiatives and we look forward to being of service to the country and all its people,” Bruce said. 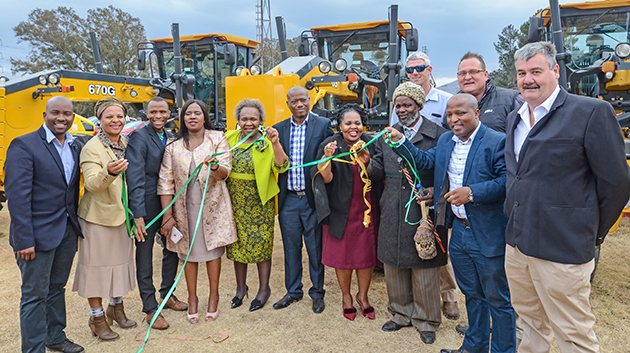