When the Matriarch ULTeco 5 Slew Loader first hit the wide-open sugar cane lands of the Komatipoort irrigation farms it was a revelation.

Here at last was a competitively priced slew loading tool where the operator could face the load all the time and work on lands where the irrigation infrastructure was not harmed in any way.

“The ULTeco 5 is a great machine and I’ll be forever grateful for the advantage it gave me as a contract cane transporter to load cane trailers quickly and efficiently for the haul to the nearby mill,” he tells us. “We clocked some 6 800 hours in three years which goes to show that in the cane harvesting season, which traditionally runs from April to November, the ULTeco 5 Loader seldom stood idle.”

Hennie’s company is aptly named after the plains that lie below the nearby Lebombo mountain range. He bought the company in January 2016 from the previous owners, a group of sugar farmers who hauled cane to the nearby Komati Sugar Mill, as he does now. The sugar cane on the plains near Komatipoort is mostly under drip irrigation where the subsurface irrigation pipes can deliver water and nutrients directly to the roots of the plant. It is this infrastructure that was often damaged when tracked cane loaders were used in the lands.

“When Justin and Ashley Bell of Matriarch Equipment told me that they were introducing a more powerful version of the ULTeco 5 Slew Loader in the ULTeco 6 model that would have 4x4 traction, I was immediately interested,” Hennie says. “It’s not that we ever really got stuck but in the wet season our underfoot conditions can get slippery and I felt that the all-wheel drive traction would be beneficial to us, offering more stability when loading and especially when driving from one production unit to the next.”

Hennie had been the manager for sugar cultivation and harvesting on a large commercial farm in the area and certainly knows the conditions that equipment and operators endure. He views the fact that the Matriarch ULTeco 6 Slew Loader can be driven to another production unit without the need of a low-bed trailer and rig as a definite cost- and time-saving advantage.

His older Matriarch ULTeco 5 Slew Loader is now kept as a standby machine.

“We took delivery of the Matriarch ULTeco 6 Slew Loader in early June 2018 and I must say that with its all-wheel drive traction, compared to a tracked machine, it works much smoother and with lower ground impact. Most of our clients here practice ratooning of cane where the plant can regenerate after harvesting. This makes it important that the subsurface irrigation infrastructure is not damaged,” he says.

According to Hennie, his operators who had worked with the Matriarch ULTeco 5 Slew Loader all took to the newer ULTeco 6 machine immediately and all commented on the larger airconditioned cab that offers greater visibility of the working area. Performance has been beefed up with a larger hydraulic cylinder on the boom and a new type of hydraulic pump to increase flows.

“We had in the past easily loaded 900 tonnes in a 24-hour cycle using the Matriarch ULTeco 5 Slew Loader and I believe we will surpass that with the ULTeco 6 model as soon as the operators get used to the greater power and stability the four driving wheels offer. Currently we’re looking at an average fuel consumption of around 5,9 litres an hour and that is certainly not breaking the bank,” Hennie says with a smile.

Ashley Bell of Matriarch Equipment says the company is pleased with how this latest model is performing at Lebombo Vlakte Vervoer as it shows that the ULTeco 6 is more than capable of meeting the needs of larger sugar estates and contractors for a higher production slew loader.

He adds that the ULTeco 6 has greater track flexibility, ranging from 2,1m to 3,4m, which is achieved using spacers and different offset wheel rims. 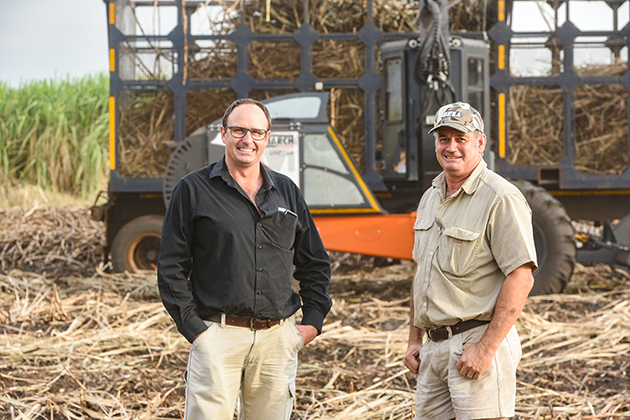 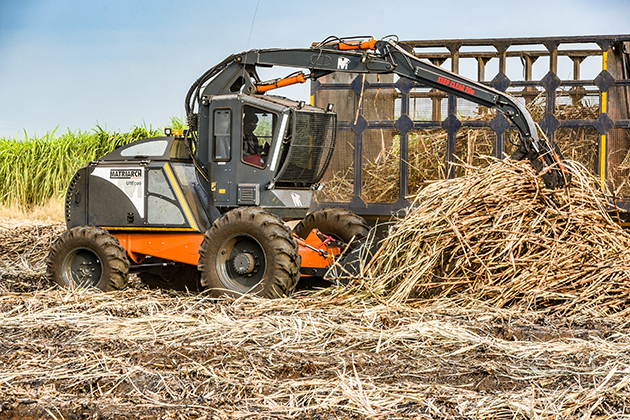 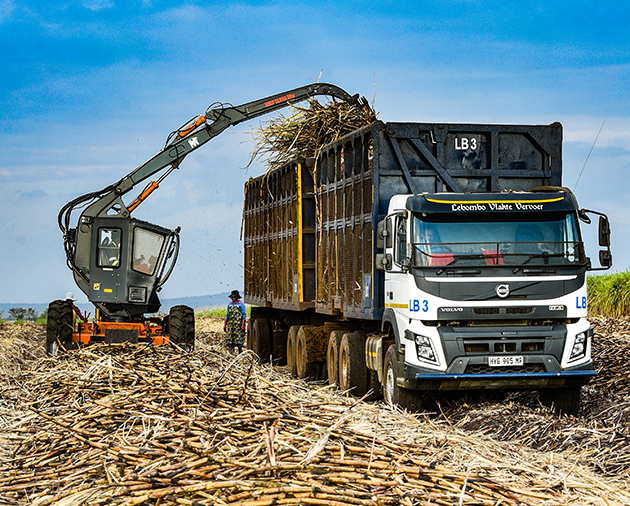