Lubocon credits Bell support as it grows and expands its fleet

One of the biggest obstacles emerging contractors in both civil engineering and mining experience firsthand, is that of access to capital which will bring them much-needed yellow metal equipment on which such industries rely heavily. That is, unless an established original equipment manufacturer (OEM) such as Bell Equipment shows understanding which translates into good business sense and has the added advantage of creating customer loyalty.

Partners Lungisa Tshele and Bongani Msimango own Lubocon Civils and Mining. Both are university graduates - Lungisa is a quantity surveyor and Bongani a civil engineer - and per chance both spent more than seven years with a large South African multi-disciplinary civil engineering and construction company, learning their respective trades. Their dream of forming a company together was forged during a stint with another well-known contracting company specializing in bulk earthworks and contract mining and here they got to grips with earthmoving equipment manufactured and sold by Bell Equipment. “Leaving behind salaried employment when we went out on our own in 2009 was difficult to say the least, and convincing potential clients that we were serious players was even harder,” Lungisa says. “We were a real start-up business with no formal office and less than 20 employees.”

“We were, however, confident in our abilities to fulfil clients’ civil construction needs and felt we had the credentials to prove that,” Bongani adds. “We started out with a CE-1 rating and within a year had progressed to a CE-7 rating, which was largely due to our clients expressing their satisfaction with the quality of our work.”

The fledgling company soon built a reputation for successfully completing civil engineering projects on time and on budget. Work was undertaken in all provinces except KwaZulu-Natal and an impressive list of clients includes national and provincial governments, SANRAL, municipalities and private township developers. The company was tasked with typical infrastructure development such as water supply and sewers, roads, bulk earthworks and storm water management.

“Being a young company, we battled to get financing to purchase earthmoving and processing equipment but during our previous employment we had been exposed to such high-quality equipment made and sold by Bell Equipment, which had impressed us and led us to approach the company, armed with not much more than our confidence and signed contracts,” Lungisa says. “To their credit, Bell Equipment’s management listened to our business plans and we felt we were being taken seriously.”

“While we still consider ourselves close to our roots in civil engineering, we realized during 2017 that this type of infrastructural work was drying up fast due to very little government-issued work being awarded,” Bongani tells us. “By then, we felt confident enough to start looking at contract mining which would also expand our repertoire of skills. We knew that we would have to purchase equipment better suited to mining and again we turned confidently to our OEM of choice, Bell Equipment, and the company’s knowledgeable salesman, Kobus van Niekerk.”

Lubocon Civils and Mining was awarded a load, haul and material handling contract at a silica mine close to Delmas in Mpumalanga. Other tasks included waste removal as well as haul road and loading platform maintenance. This contract called for new earthmoving and material handling equipment and in mid-2019, this young but dynamic company took delivery of four new Bell B30E Articulated Dump Trucks (ADTs), a Kobelco SK500HDLC-8 50t Excavator, a Bell L1806E Wheeled Loader and a Bell L2606E Wheeled Loader. A Bell B20D 18 000l Water Bowser completes the fleet.

“We believe our choice of equipment built, sold and maintained by an OEM we trust, namely Bell Equipment, makes for sound thinking as it’s a truly South African company, which has proved its quality in design, build and back-up of its equipment. We experienced this firsthand while working with our previous employers,” the partners echo. “Added to this is Bell Equipment’s wide footprint across Southern Africa and its belief in us as a young company and it becomes a ‘no-brainer’ as to where our loyalty lies.”

Silica is used in the glass making and ferro-metals industries. The blasted rock is often big and always very abrasive and heavy with an average specific gravity of 2,6.

“Being tasked with having to move 100 000 tonnes of mined silica rock per month, we were confident that the combination of a correctly sized loading tool such as the Kobelco SK500HDLC-8 Excavator was properly matched to four Bell B30E ADTs,” Bongani says. “The Excavator’s bucket and those of the Bell L1806D and L2606E Wheeled Loaders are all reinforced and ground engaging tools are changed regularly due to the abrasive quality of the silica material. We also have a spare excavator bucket as a back-up.”

Lubocon Civils and Mining’s four Bell B30E ADTs were factory-fitted with bin liners and accurate feedback on engine performance and loads carried is transmitted through the Bell Fleetm@tic® monitoring system. “We’ve found that the new Bell B30E ADTs are certainly lighter on fuel than the older B30D models at an average of 14 litres an hour,” Lungisa says. “Fuel burn is a major cost in any mining operation and given the dense material that they handle, our Bell Wheeled Loaders return frugal fuel consumption figures of
26 litres an hour for the Bell L2606E and 14 litres an hour for the Bell L1806E machine.”

The Bell Wheeled Loaders load tipper trucks and are used in material handling duties within the plant.

“When you consider that the Kobelco SK500HDLC-8 Excavator loads 3 000 tonnes of blasted rock in a 24-hour period, at a utilization of between 60 – 70%, its fuel burn of 40 litres an hour is quite remarkable,” he adds.

Lubocon’s Bell manufactured equipment has been bought with warranties up to 8 000 hours with an option to extend. Martin Tredoux is the Lubocon Site Manager at the silica mine and he deals directly with Bell Equipment’s designated Product Support Representative, Thutukane Dlamini, at the Bell Jet Park Customer Service Centre. “Thutukane is my direct link to Bell Equipment to arrange servicing, buy spare parts or simply gain information,” Martin says. “We’ve been impressed with the parts stockholding that Bell Equipment has even for older machines, like our Bell B20D Water Bowser and Bell 770D Grader, and arranging servicing or repair comes down to simply making a phone call.”

Both Lungisa and Bongani feel strongly about viewing their relationship with Bell Equipment as a virtual partnership over the past four to five years as this was an OEM which believed in them from the beginning despite their company’s humble start. And to cement that relationship, Lubocon Civils and Mining, a young company which sees its future growth in niche markets within the opencast mining sphere, has recently taken delivery of two new Bell L2106E Wheeled Loaders. 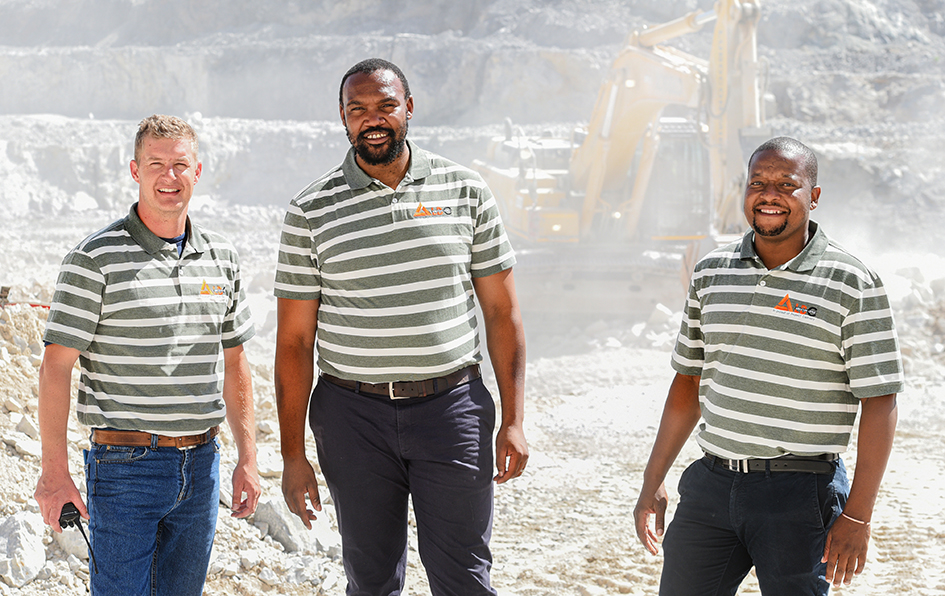 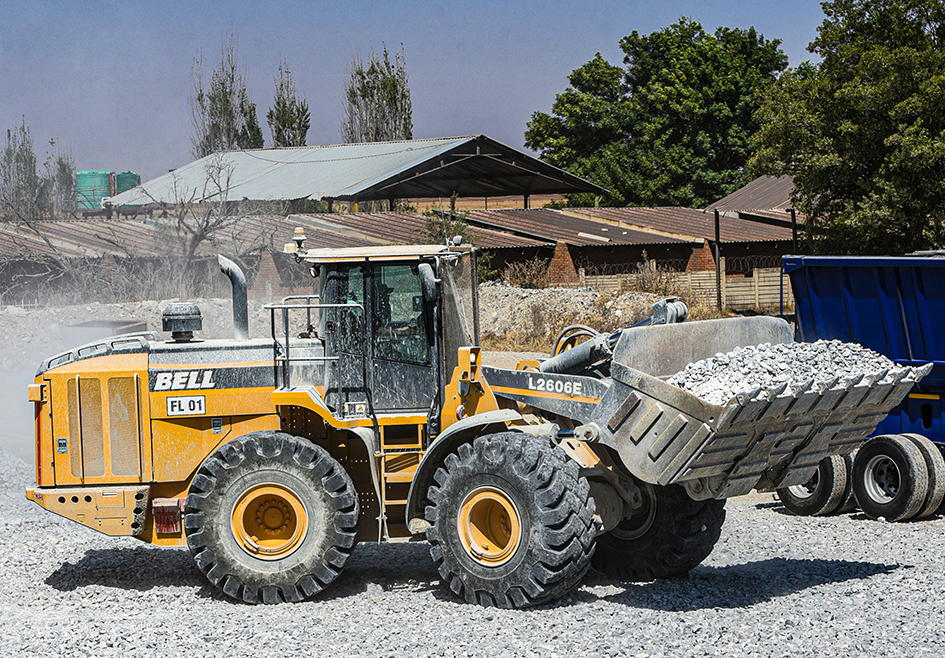