MMP bowled over by performance of new Bell B30Es

A disciplined approach to life developed on and next to sports fields at the highest level has positioned two brother partners in good stead in the challenging world of mining.

John Mmutle is the founder and General Manager of Mmutle Mining Projects (Pty) Ltd. He gained Gauteng colours for both cricket and hockey before qualifying as an industrial engineer with a postgraduate qualification from the Wits Business School. His younger brother, Stephen, is the Operations Director for the company and, according to his older sibling, is more analytical in his approach to life. He holds a B Tech degree in logistics and supply chain management. He is registered with the Gauteng Cricket Board as an official cricket scorer with Wanderers Cricket Stadium as his own stamping ground.

“It would be amiss if we didn’t give credit for our diligent start in life to our single parent mother, Mary, who kept our noses to the grindstone,” John says. “Our mother, with her background in training and marketing, paved the way for Stephen and I and this we will never forget.”

John worked as a contracts manager for Fraser Alexander Bulk Mech for 10 years when in 2016 he saw adverts encouraging emerging contractors to register for Small Medium and Micro Enterprise (SMME) initiatives. A long-standing urge to make a difference to his and his family’s lives kicked in and he decided to pursue this dream.

“I made a full disclosure to my employers that I was keen to follow this path and registered Mmutle Mining Projects (Pty) Ltd as a company that same year,” he says. “In June 2017, when registering as a VAT vendor, we landed our first material handling contract at a large colliery loading run-of-mine coal for transport to the processing plant.”

From these seemingly humble beginnings and with 20 employees, Mmutle Mining Projects steadily grew and today employs 170 people. Its load and haulage fleet, consisting mainly of rigid trucks, has also grown. Other contracts have seen the young company transporting silica to smelters and reclaiming sludge from tailings dams that is then transported for reprocessing.

“I must mention the invaluable assistance we’ve had from the National Empowerment Fund (NEF) who not only assisted us with finance but also sound advice,” John adds. “They will not set you up to fail and they definitely want you to repay their loan, which we did when buying new rigid trucks and an excavator.”

Technical changes on the site of their first material handling project at the colliery created challenges that had to be met head-on. Their clients extended their contract by 42 months and increased the volumes that had to be moved. Suddenly the working environment also changed and working surfaces that had been level now became steep ramps where the rigid trucks could no longer operate and a drastic change was necessary for Mmutle Mining Projects to still offer a sustainable service.

“We’d had lots of experience with equipment built and sold by Bell Equipment during my time at Fraser Alexander Bulk Mech and I tasked my brother, Stephen, and our Operations Manager, Thabo Lerumo, to approach the NEF and another government agency, the Small Enterprise Finance Agency (SEFA), for funding to buy four Bell B30E Articulated Dump Trucks (ADTs).”

Both Mmutle brothers are adamant that the immediate support and input they enjoyed from Bell Equipment Sales Representative, Carel Venter, and his principals made the difference and justified their choice of ADTs.

“Business should go to people like Carel, who has shown that while he really wants us as his customers, he and his company understand our business and appreciate the challenges we face,” says Stephen Mmutle. “With our funding in place we happily took delivery of two new Bell B30E ADTs in July 2020 and another two in August the same year.”

John points out that Mmutle Mining Projects is involved in this particular contract as a partner of Zizwe Opencast Mining, which brings added responsibilities, especially on fuel consumption that needs to be closely watched. In this regard, the Bell B30E ADTs are performing impressively and the Fleetm@tic® system reports average fuel consumption of just 17 litres an hour while hauling coal to the plant 2,5km away.

“We learn a lot from the Fleetm@tic® Classic programme as we monitor good loads of around 27 to 28 tonnes, which translates into our four Bell B30E ADTs delivering 6 500 tonnes of coal in a 24-hour shift,” explains Thabo Lerumo. “The Bell ADTs are fitted with 200mm greedy boards and tailgates to ensure good loads are consistently delivered.”

When Thabo was asked how the deployment of the four Bell B30E ADTs has changed his working life, he replied: “When using our previous equipment, we were forever playing catch-up and when your client isn’t happy, you don’t sleep either,” he smiles. “Since the arrival of our Bell B30E ADTs, we can focus fully on the job at hand and this confidence has had a positive downstream effect on our operators as well as they are no longer nervous of equipment breaking down. It’s suddenly a great environment to be in.”

Mmutle Mining Projects bought the four Bell B30E ADTs with standard 12-month and unlimited hour warranties and have a service contract in place for the warranty period.

“We’re ambitious in our growth and are in the process of establishing an asset-holding company we’re calling Temo, which will in future rent yellow-fleet machines to Mmutle Mining Projects.” John says. “We’re also keen to expand our crushing and screening side of the business and I’ve asked Carel Venter for quotes on Finlay equipment, meaning that we aim to walk a long road with Bell Equipment.” 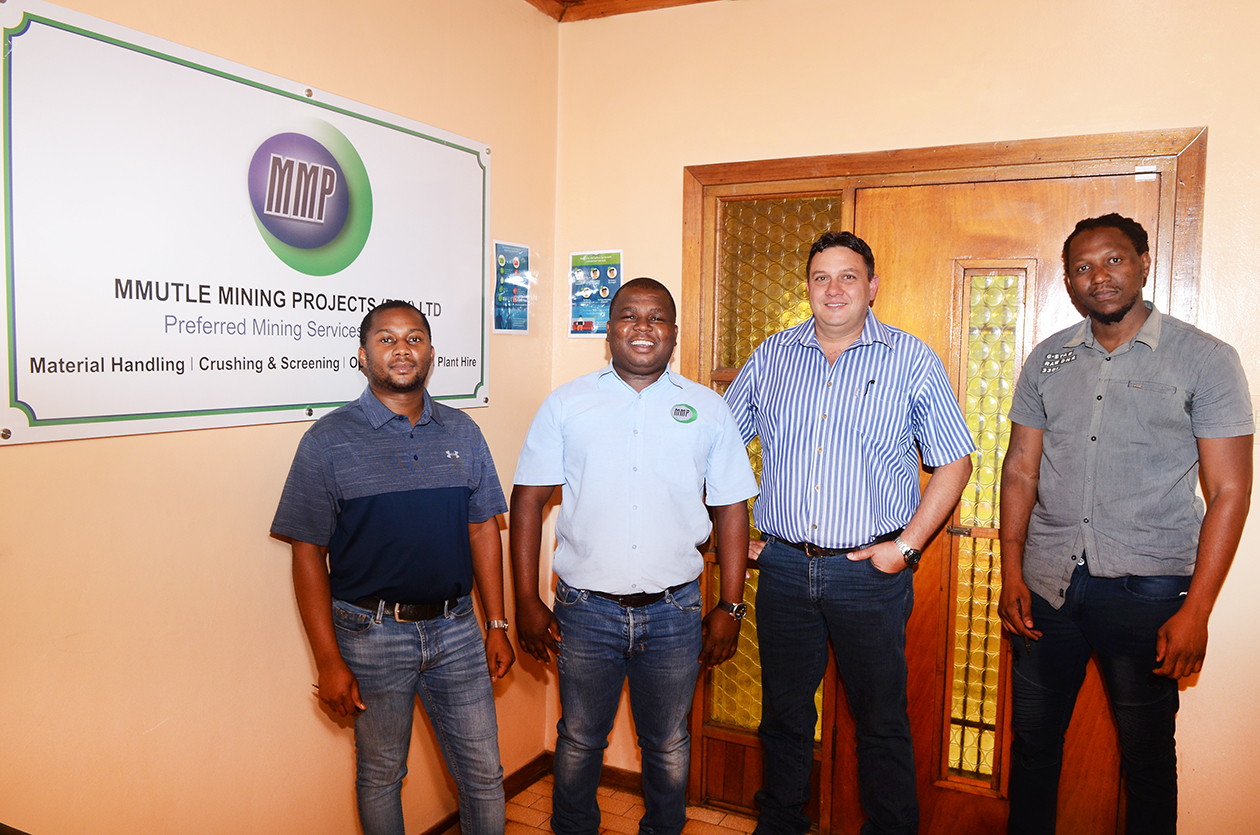 This story features on our 1st Edition 2021 Bell Bulletin