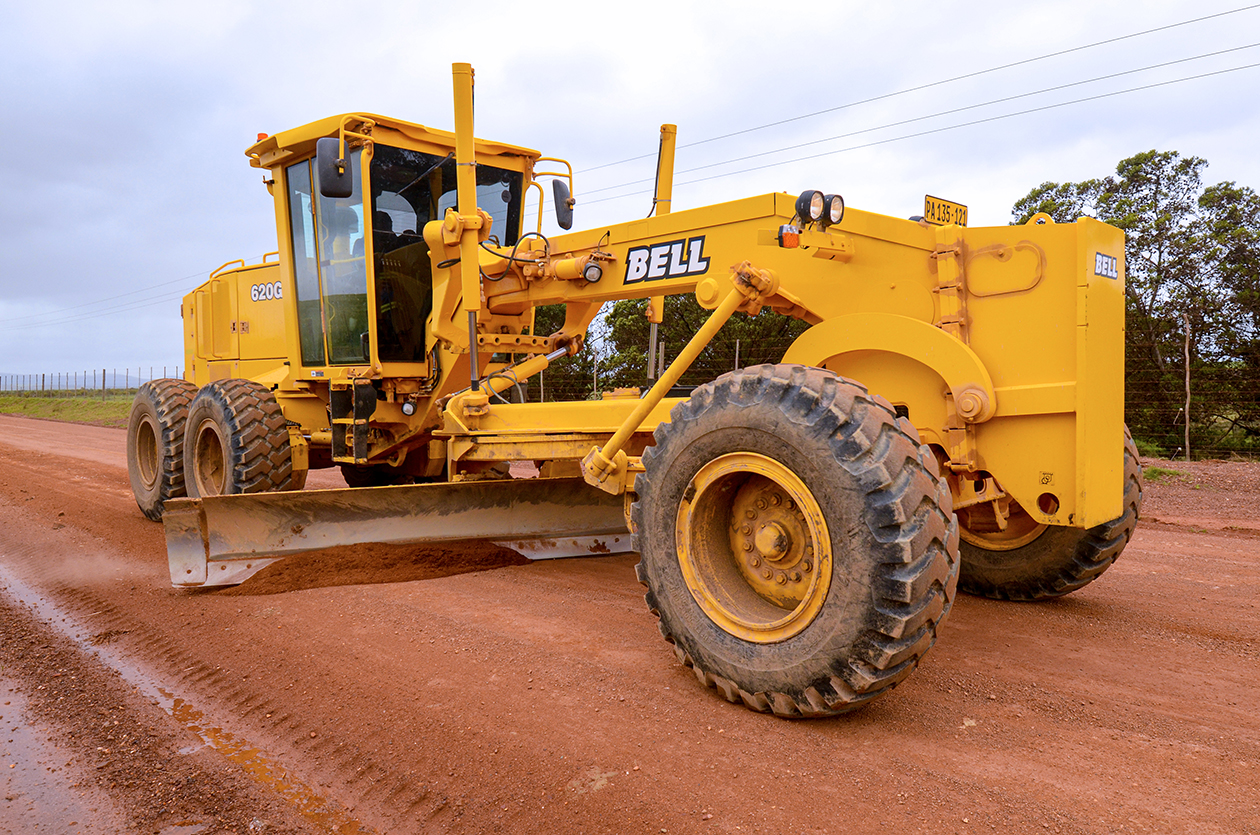 Graders generally come in two classes, namely those that are best suited for the heavy work of road construction and others that work best maintaining roads. A provincial government in South Africa, best known for the quality of its service delivery, has found that graders from Bell Equipment fill both roles equally well with a competitive price tag as a bonus.

The Western Cape Province in South Africa is known for its picturesque scenery comprising among other attractions, big-sky Karoo vistas, dramatic mountains, and a spectacular coastline. To get to these places its citizens and visitors use some 6 600km of tarred roads and almost 33 000km of gravel and access roads*. All these roads, especially those that are unpaved, need to be maintained and at times rebuilt. This is the responsibility of the provincial government’s Department of Transport and Public Works.

“We, as the Department of Transport and Public Works, oversee the construction and maintenance of all the non-national roads in our province and the acquisition and maintenance of the yellow machine fleet used for this,” says Mustapha Subailey, the Department of Transport and Public Works’ Control Technician. “To give you an idea of the size of our yellow machine and general vehicle fleet we control, its current replacement value is a sizeable R1,7 billion.

“We pride ourselves on the fact that we do regular and correct road maintenance on especially our gravel roads and this disciplined approach sees our yellow machines remaining mechanically sound for a long time, as long as 30 years in some cases,” Mustapha explains. “We therefore have a replacement policy on machines and vehicles that is based on replacing equipment when it starts costing more money than it is earning.”

Within the last year a need arose to replace six maintenance standard graders and two pneumatic tyred rollers. State departments issue one of two types of tenders, a national tender open to all registered original earthmoving equipment suppliers (OEMs) and one for preferred suppliers, known as an RT57 contract. Bell Equipment is such a preferred supplier and won the tender to supply the six Bell 620G Graders and two Bomag BW27RH Pneumatic Tyred Rollers.

“Bell Equipment exceeded our expectations especially with the Bell 620G Graders; a powerful machine that has the same engine as the old Bell 670G model of which we have 10 we had acquired previously, and which are still giving us excellent service,” he adds. “Interestingly enough is that we requested four of these new Bell 620G Graders be fitted with mid-mount scarifiers, a set of slightly shorter ripper teeth than the normal ripper that is fitted on the rear of a grader, fitted in front of the blade.”

The Department of Transport and Public Works in the Western Cape operates from its main workshop in Bellville but has depots in Paarl and in Oudtshoorn. Equipment is also rented to various local municipalities such as George, Moorreesburg, Van Rhynsdorp and the Cape Agulhas Municipality, which as its name implies is close to the southernmost tip of Africa. The municipalities are reimbursed for the maintenance that they do on gravel and other roads on behalf of the provincial department.

It was at the latter municipality that we came across a Bell 620G Grader working on the maintenance of a gravel road outside the town of Bredasdorp. With the mid-mount scarifier in place, the top level of a gravel road was loosened before the grader blade running behind the scarifier, levelled the surface again.

Jan de Goede, the Workshop Supervisor for the Cape Agulhas Municipality, and an industry veteran with 36 years’ experience in earthmoving plant and earthworks, is full praise for the Bell Graders: “If I had my way, I’d change our entire fleet to Bell Graders due to the quality of their build and performance,” he says. “But my experience with Bell goes beyond the equipment as Bell is a company where its people still make a difference like Francois Kellerman, who has since retired, and Kobus van Zyl, the Workshop Foreman at the Cape Town branch, who goes out of his way for us.

“The mid-mount scarifier on the Bell 620G Grader gives an extra tool in our quest to maintain our gravel roads properly and we’ve been very happy with the way it’s working,” Jan adds.

The six new Bell 620G Graders and two Bomag BW27RH Pneumatic Tyred Rollers have been added to an impressive fleet of Bell manufactured and backed equipment. There are 16 Bell 670G and 620G Graders, nine Bell Wheeled Loaders, 13 Tractor Loader Backhoes, three four-wheel drive Bell Tractors and 42 Bomag compaction machines comprising of tampers, pedestrian and ride-on rollers. All the equipment is painted in a particular specified paint namely Golden Yellow B49, which is guaranteed against rust for four years. This is a standard for all yellow machines in the department’s fleet.

The Bomag BW27 RH Pneumatic Tyred Rollers have been eagerly awaited due to their dual application on tarred as well as gravel roads.

We asked Mustapha about the performance of the new Bell and Bomag additions to their fleet to which he replied smiling: “We have a saying that when you don’t hear anything about a piece of equipment, it’s running well. To date there hasn’t been a peep about our new machines from Bell Equipment.” 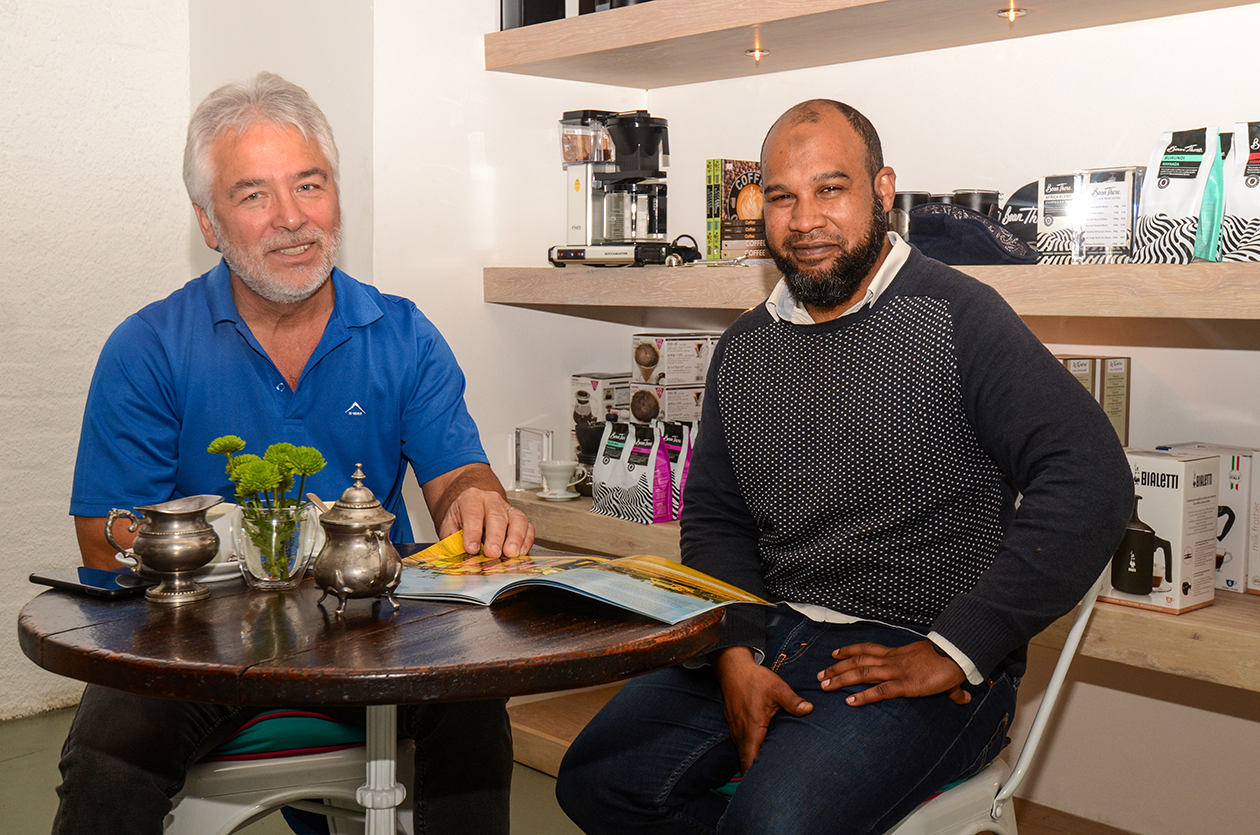