An enterprising spirit, enduring perseverance and an ability to change with the times have seen an emerging timber harvesting contractor in northern KwaZulu-Natal evolve from a motor manual outfit into a successful, fully mechanised harvesting operation.

Joseph Zulu started his company Siyawisa Hlathi, meaning ‘we fell timber’, in 2005. He has since used his years of forestry experience and his confidence in his equipment supplier, Bell Equipment, to embrace forestry mechanisation to the extent that his equipment set-up is the benchmark and preferred choice of the landowner on new contracts.

Joseph first ventured into the forestry industry working as a supervisor for Ntonjaneni Timber Harvesters (NTH) in Melmoth, having previously worked in the agricultural sector for Government in the Makhathini Flats area. After seven years with NTH the company closed down and Joseph moved to Fell & Haul where he worked as a foreman on the harvesting operation. Eight years later Fell & Haul was bought by Unitrans prompting Joseph to start Siyawisa Hlathi, which subcontracted to Unitrans for three years. This was a motor manual operation using chainsaws to fell the trees, manual labour to debark and chainsaws to crosscut the timber to lengths.

A turning point came in 2005 when Siyawisa Hlathi was awarded a three-year contract with SiyaQhubeka Forests (SQF), a partnership between Mondi Forests, black empowerment partners, Government and the local community surrounding the iSimangaliso Wetland Park. Another contract followed three years later, however mid-contract SQF had the opportunity to introduce a semi-mechanised harvesting system to support the requirement for a safer operating environment, higher production and opportunities to upskill labour.

The start of a productive relationship

Knowing and understanding the requirements, Joseph turned to Bell Equipment having had various positive experiences with the company and its equipment during his years as a foreman on the Eastern Shores, where he used a T25 Timber Truck and a Bell Flexi Loader, as well as at Fell & Haul. “Bell machines have performed well, so I have always loved working with them,” he says.

Today Siyawisa Hlathi employs 16 operators and works 24 hours, seven days a week operating in Dukuduku and Kwambonambi Operations. Combined these operations harvest 12 700t of Eucalyptus per month, crosscut into 5,5m lengths, which is delivered to roadside. The company also loads from the roadside into haulage trucks.

To achieve Mondi Forests’ objective of debarking in a single pass, Siyawisa Hlathi recently invested in three Waratah H215E Processing Heads fitted to Kobelco SK210LC Excavators, which work infield. The single pass has shown benefits of increased production, lower costs along with a significant decrease in fibre damage to the trees. The reduction in fibre damage is a result of a combination of three main aspects of this head: debarking with less passes due to specialised rollers and a unique collaboration between the de-limbing knives and the head’s inner chassis.

The company has also bought a fourth Kobelco SK210LC with a Matriarch MF800 0,8m² grapple for loading road trucks.

Joseph believes it is a mistake to chase production and skimp on servicing. “If a machine needs servicing then we stop the machine because if you look after your machines, they will look after you,” he says. For this reason, Bell carries out major servicing of Siyawisa Hlathi’s equipment, Bell Customer Care provides Machine Condition Assessments (MCAs) and Siyawisa Hlathi is responsible for greasing and small services.

The proof of the pudding can be seen with Joseph’s two oldest Bell Forwarders, which have achieved 33 000 and 24 000 hours respectively. “The oldest machine has done very well. I’ve had to replace the diff after it ran out of oil but there have been no major breakdowns,” says Joseph. “The second one has had two new gearboxes but the engine is still going strong. The original set of tyres reached 12 000 hours because of the sandy underfoot conditions and there is still one of those tyres on the machine!”

Just as impressive are the hours achieved on his Waratah HTH616C Processing Heads of 28 000, 24 000 and 22 000 hours. These units have been so meticulously maintained that Joseph plans to change the rollers so that they can enjoy a second life.

He is expecting much of the same from his Waratah H215Es in terms of longevity with the oldest unit having already reached 4 000 hours. The H215E’s easier greasing system has impressed Joseph. “They are also more cost effective because it is easier to buy separate parts as you can strip the part and buy only what you need,” he adds.

The Kobelco SK210LC is a true complement to the Waratah H215E, using between 20 to 25% less fuel and delivering better productivity than the competitor carriers that Joseph bought in between his Kato and Kobelco machines. This is largely due to the improved hydraulic routing on the excavator, creating less friction on the hydraulics, which means less power is needed to drive the hydraulics and the machine operates at lower revs, resulting in less energy required from the machine and lower fuel burn. The reduced revs also translate to a quieter operating environment.

Bell Equipment’s first E-series six-wheel drive Bell TH302 Timber Forwarder was delivered to Siyawisa Hlathi in May and Joseph has likewise been impressed with the improvements compared to his older machines. “We don’t need 6x6 often but we decided on this Forwarder because there are some areas where it helps to have this additional traction. Safety is very important so I like that the crane has been designed for it to be controlled and set electronically from the operator’s cab. Apart from the safety aspect it means that the turnaround time is faster and it is easier to diagnose and set the pressures,” says Joseph.

A further safety aspect on the Bell Forwarder is the unmatched braking capability, this alone sets this Timber Forwarder way ahead of any competitor and assures peace-of-mind to any owner and operator. The braking system built into the Bell Forwarder complies with the European Braking Standard, which is one of the most rigorous braking standards in the world to meet.

The company is achieving 18t payloads with the new 6x6 Forwarder compared to the 13t payload of his older units. A new 4x4 Forwarder was added to the fleet in July and, with the slighter wider bunks on the E-series model, Joseph is pleased that the truck is delivering payloads in the region of 15t.

Bell Equipment Sales Representative, Haig Thompson, is justifiably proud of his customer. “Joseph has been a fantastic story for us because he has remained true to Bell and achieved his production, so much so that the landowner is encouraging contractors to follow suit and come to Bell.” 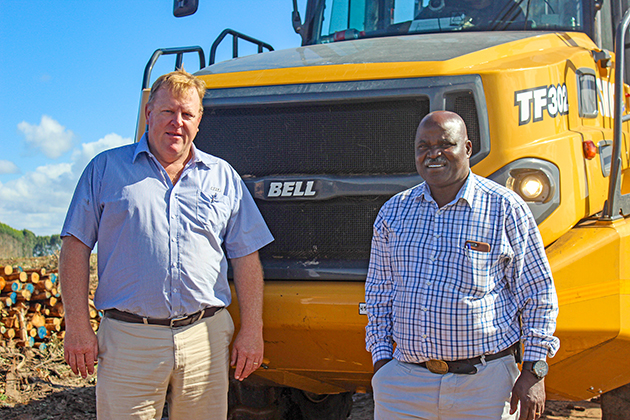 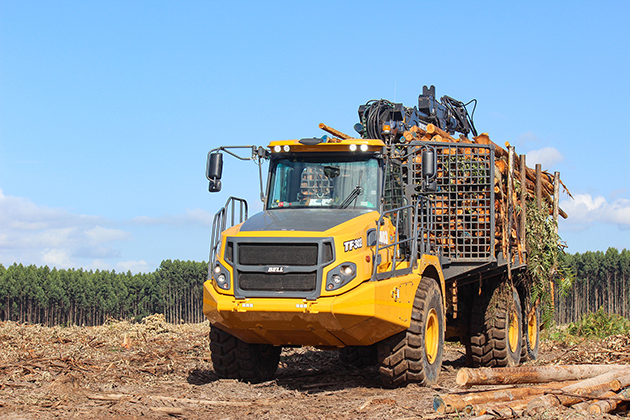