To the man in the street, road construction, maintenance, and improvements to both pedestrian and motorised traffic infrastructure often seem a hinderance as opposed to their intended long-term benefits.

What is also not always blatantly obvious, is the role emerging contractors play in such construction projects when they are encouraged to tender for work by established contracting companies with original equipment manufacturers (OEMs) offering favourable deals on construction equipment. The latter is an initiative called Enterprise Development Beneficiary Assistance and it is steadily bringing about change and upliftment through skills transfer in the civil construction field.

Sidney Roberts considers himself fortunate to be part of this initiative, but his journey has not been an easy one. While studying towards a B. Tech degree in Civil Engineering at the Cape Peninsula University of Technology, Sidney worked for a well-known Cape Town-based roads construction company as an intern.

“After spending three months in the mechanical workshop learning how earthmoving and material handling equipment worked, I was sent to Namaqualand to work on a roads project where I had no vehicle and walked the 10km stretch of road surveying and setting out pegs every day,” he tells us. “This great company had however given me a bursary and I was pleased to be able to work back the time with them under some good mentors.”

Once he qualified, Sidney worked with other contractors and gained valuable experience in roads and services construction all over the Western Cape, spending long periods away from home. A stint with JVC Plant taught him a lot about the contractual side of the business and, as a senior site agent, how to work to the highest standards of quality.

“But, in the back of my mind, there had for a long time been the dream of being self-employed and I actually registered my future business, SR Civil Contractors in 2013 while still employed,” he says. “I only resigned from full-time employment after landing a solid contract in 2014 for a water pipeline in Cape Town’s suburb of Tokai.”

Sidney and his small company, SR Civil Contractors, focused on finding work in roads, paving, water reticulation and services fields and importantly, sub-contracting to larger more established contractors. “And so it happened that one Friday afternoon I received a call from Enrico Bossi, the Managing Director of Umzali Civils, and he told me my name had been mentioned as a possible replacement for another small contractor who was battling to complete sub-contracting work and so holding up a major project,” he says. “I grabbed this opportunity and successfully completed our side of the contract building concrete manholes for the Drakenstein Municipality.”

Enrico identified that Sidney’s company needed earthmoving equipment and he called Fiona Johnson, Bell Equipment’s Sales Representative in Cape Town, to find out whether the OEM could assist. With input from John Collins, Bell Equipment’s General Manager Cape Region and Bruce Ndlela, Director: Business and Public Sector Development, and the Bell Equipment factory in Richards Bay, Sidney took delivery of a Bell 315SL Tractor Loader Backhoe (TLB) and a Bomag BW120 AD-5 Tandem Vibratory Roller in 2017. The deal was structured so that Sidney could pay it off within 36 months.

“I really have to thank Enrico Bossi of Umzali Civils for making this happen. And to show his commitment to us being able to pay off the equipment we’re getting continued support from his company with sub-contracting work,” Sidney adds. “Not having to hire in equipment creates better cash flow for us and has assisted us in steadily moving up the CIDB competency scale to having now reached Grade 5.”

The equipment has expanded SR Civil Contractors’ repertoire of skills and the young company has been engaged in diverse projects such as pipeline, paving and parking area construction where both the Bell 315SL TLB and Bomag Roller are used extensively. “I’ve been impressed with the Bell 315SL TLB’s fuel consumption of between 6 and 7 litres an hour, although that does increase slightly when we use the backhoe for trenching when installing pipes and other services,” Sidney says. “The Bomag BW120 AD-5 Roller gives us great compaction over a 1,2 metre width and for our type of work we really don’t need any heavier compaction at this time.”

The year 2018 saw SR Civil Contractors land more and more work and to this end, Sidney bought another Bell 315SL TLB and later in the same year, a Bomag BW 65-H Pedestrian Double Drum Vibratory Roller. Both these machines were bought using Bell Finance through Wesbank.

“I have happily stayed with Bell Equipment for a number of reasons besides the great design and ruggedness of the company’s products,” Sidney says. “I have a good relationship with Bell personnel from Fiona Johnson in sales to all the product support and workshop and spares department staff. I feel I can speak to anyone at any time, which matters to me.”

“I will be looking to further expand my growing fleet of Bell machines and will possibly look at acquiring a small excavator in the near future, which could be useful to hire out on a plant hire basis as well.” 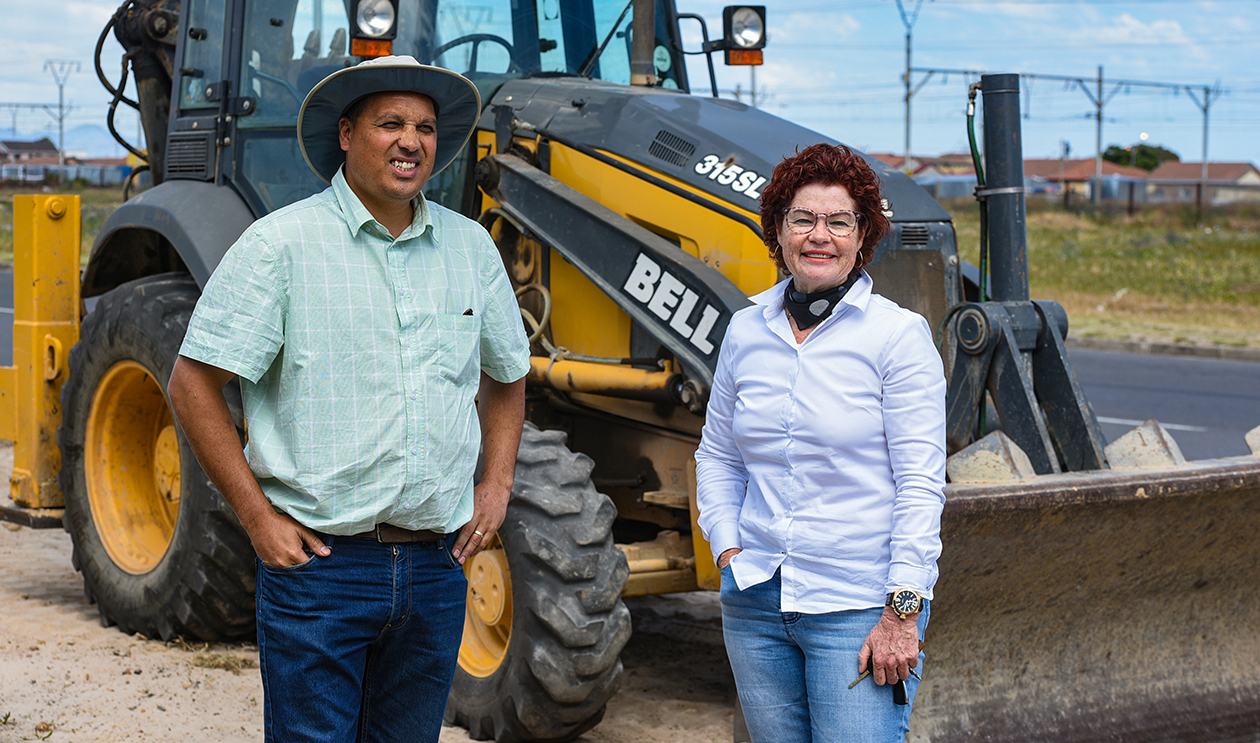