The Leisegangs are one of Zululand's pioneering families having arrived as Norwegian missionaries during the late 1800s. Their subsequent involvement in farming and construction activities in the area has seen them associated with Bell Equipment through three generations, and the relationship continues to grow and thrive.

The relationship started after the Second World War when brothers, Ralph and Nolly Leisegang, returned home and started farming in the Empangeni area. Ralph was a great friend of Bell founder, Irvine Bell, and sold him Khulu Properties, which became the original Bell workshop. The brothers were also among the company's first customers when the Bell Tri-Wheeler Cane Loader was invented and Nolly's son, Paul, still has one of his father's "terribly old" Cane Loaders and says "it still works every day".

Today the relationship continues through Paul's son, Brenton Leisegang, and his company Belrex 372. For the past five years Brenton has been investing in a fleet of machines that he uses for both his own construction contracts and for plant hire. His Bell fleet currently includes three 315SK 4x4 Tractor Loader Backhoes, having acquired the first unit in October 2014 and adding a new machine to the fleet in 2015 and 2016.

In 2017 Brenton diversified the fleet with a Bomag BW120 AD-5 Tandem Roller in January and followed this up in July with a new Kobelco SK210LC Excavator - the first Kobelco to be sold by Bell in KwaZulu-Natal following the distribution agreement signed in June, and the second sold in the Southern African region.

Brenton's experience with Bell machines dates back about 25 years when, after leaving school, he joined his father on the family's sugarcane farm they owned outside Empangeni, towards the fertile Nkwaleni Valley, where they made use of Bell Tractors and Cane Loaders for the harvesting operation. They were also involved in construction and made use of a Bell Excavator, Scrapers and Articulated Dump Trucks building dams in Gingindlovu and Babanango, and on various road works contracts.

Opportunities in Mozambique saw Brenton relocate in 1998 to Matola, outside Maputo, where a substantial Bell fleet was used on roads and earthworks contracts. In addition he made use of Bell forestry equipment on timber contracts in the Pembe province in the north of Mozambique.

In 2012, when Brenton's children were school-going age, he and his wife, Tracy, decided to relocate back to South Africa. They established themselves at Zinkwazi on the KwaZulu-Natal North Coast, from where they are ideally located to service northwards to Richards Bay as well as south and inland to Pietermaritzburg.

Explaining his loyalty to the Bell brand, Brenton says: "We've stayed with Bell because of our Zululand connection and their great product range, but more importantly because of the good service that we receive from our Bell Sales Representative, Blake Phillips, and the rest of the Bell Umhlali team. If I call them on a Friday afternoon needing assistance and tell them that it can wait until Monday, they will come out on the Friday afternoon.

"And when we were in Mozambique we made use of the Bell Maputo and Bell Beira branches and they would fly parts around the country for us all the time. That's the kind of service you want."

Brenton says he's not had any problems with his Bell fleet and has been particularly happy with the performance of his Kobelco Excavator. "I've previously had a Bell Kato Excavator, which was an excellent machine, so buying the Kobelco made sense because they are similar machines."

For the past three months the Kobelco Excavator has been on hire to farms in the Gingindlovu and Amatikulu area and has worked its way northwards to Empangeni where it has been working in farm quarries, assisting with land preparation, and installing drainage in macadamia plantations that are being developed in the area.

Belrex 372's Excavator Operator, Spookie Jardine, speaks highly of the machine, specifically the operator comfort level of the cab and the smooth, responsive controls, not to mention the air conditioned cab. He operates predominantly in 'S mode' - for normal operations and delivers lower fuel consumption - which he finds is more than adequate for the productivity customer's require.

To ensure maximum uptime Brenton's fleet is fully serviced by Bell Equipment. "Not only do I get great service from Bell, but when the time comes to replace a machine, it will have a better trade-in value from having a full service history with Bell.

Just as Brenton has enjoyed sound service from Bell Equipment, so too is he acutely aware of the need to provide a quality to service to his customers. For this reason he believes in investing in new and reliable machines for his fleet. "Customers don't want to rent an old, tired machine that isn't as productive and has endless downtime. They've got a job that they need done, and time is money," he says.

Until that day Brenton is content to roll up his sleeves and grow the business himself, and has set his sights on a Bell Grader as his next piece of kit. Brenton Leisegang (right) of Belrex 372 discusses the extraction of material from a farm quarry in the Empangeni area with Operator, Spookie Jardine, and farmer, Brett Hume. 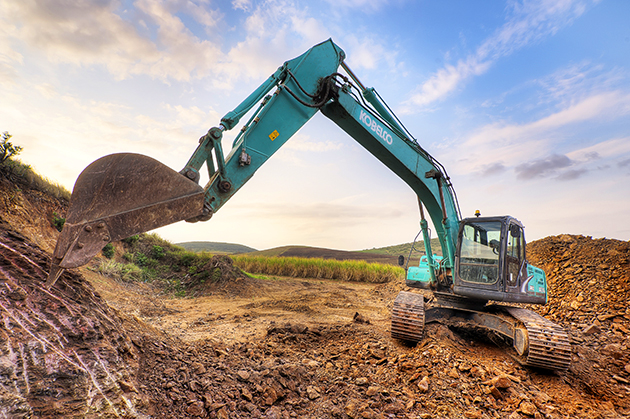