An invitation to visit the Bell Equipment stand at the 2018 bauma CONEXPO Africa exhibition so impressed the owner of a Witbank-based plant hire company by what he saw of the new range of Kamaz rigid tipper trucks, that he now owns four of these trucks, with more to come.

Vanall’s Plant Hire has been operating in Mpumalanga and further afield since 1987 when the founders, Brian Marshall and Movie van der Merwe, who were working for a large alloys company, could not find suitable plant to hire for an expansion project and decided to fill that gap themselves. When Brian’s son, John, finished school in 1993 he came into the business after buying out founding partner Van der Merwe.

“When I joined the business, we changed our focus from civil construction to bulk material handling,” says John, who is now the Managing Member of Vanall’s Plant Hire CC. “This saw us rapidly gaining experience in supplying load and haul teams for crushing plants, moving bulk materials such as tailings and slag and doing rehabilitation on discard dumps.”

The company serves clients in Mpumalanga’s metal alloys and coal mining industries and has expanded its services to industrial and mining clients in Rustenburg, Steelpoort, Cato Ridge and Vanderbijlpark. It employs almost 150 people of whom most are machine operators and truck drivers.

“We recently landed a contract to move metal slag on an alloys plant where we had deployed a fleet of nine 10-cubic metre tipper trucks,” John explains. “We were keen to see how the Kamaz 65222 with its 12-cubic metre capacity and 6x6 traction compared to our existing fleet in terms of performance and fuel consumption.”

“We have been very impressed by the Kamaz 65222 truck with its 400Hp V8 engine and despite its formidable engine size, it’s surprisingly light on fuel, consuming around 12 litres an hour compared to 10 litres for the smaller 10-cubic metre tippers,” John continues. “The interaxial locking capability of the Kamaz 65222 makes it a very strong truck and this is evident in the ease with which it tackles inclines with full loads.”

Even though Vanall’s Plant Hire generally works on dry rates, they have a cap on fuel consumption and therefore fuel burn figures are kept meticulously.

A comparison on a mining site showed the Kamaz 65222 outperforming larger articulated dump trucks with faster cycles. John sees the cheaper road licence compared to that of a road-legal articulated dump truck as a real advantage. After viewing the comparative results from both the sites over a period of two weeks positive results prompted John to order two more Kamaz 65222 trucks.

“We’ve been happy to keep our Kamaz trucks in their standard yellow livery as this adds to their visibility,” he says. “In terms of our clients’ safety regulations we’ve added fire extinguishers, rear light protectors, isolation lock-outs and bin-up indicators. Depending on applications, we may with future models consider rock bins with slanted tailgates.”

“Another important point I’d like to add is that when working on the slag dump, where we move quenched slag onto a slag dump, the single wheels on the Kamaz 65222’s rear axles have proved a success as slag shards cannot get stuck between two tyres running close to each other as in other trucks with double rear wheels,” John adds. “The slag is often still hot and jagged edges cause sidewall cuts in the tyres which, as you may appreciate, are expensive to replace.”

Slag is a heavy and abrasive material with specific gravities ranging between 3,2 and 3,8 - the latter when loading slag fines. The performance of the Kamaz 65222 trucks under these loads has impressed both Vanall’s Plant Hire and its clients. John is already considering a fleet of Kamaz 6520 6x4 trucks that have a similar load capacity of 12-cubic metres to possibly replace sub-contractor vehicles. 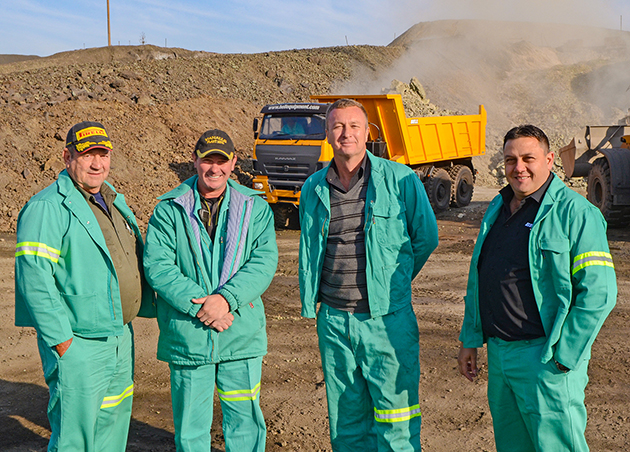 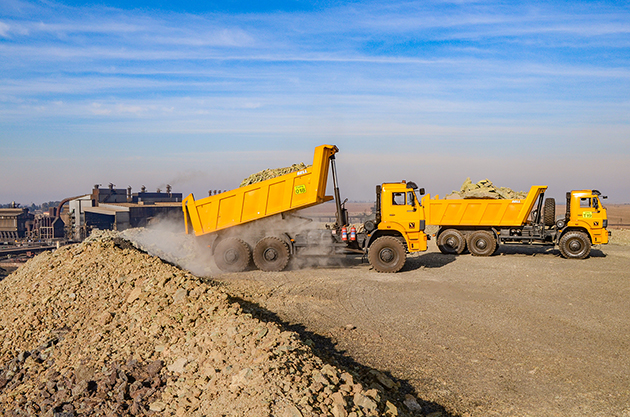