AFS, a leading specialist in earthmoving works and aggregates supply, has once again demonstrated its confidence in Bell Equipment by further investing in a new B30E Articulated Dump Truck (ADT).

This evolved E-series ADT is the sixth Bell machine to be purchased by AFS since 2014, when it acquired its first B30E.  This latest addition to the AFS fleet of earthmoving equipment will be tasked with predominantly muck shifting duties, making the most of the B30E’s powerful, yet economical, engine.

“We operate a varied fleet of plant, trucks and equipment, all of which have been selected for their quality, efficiency and ability to deliver – and our ADTs are no different,” explains Jason Allen, owner of AFS Earthmoving.

“We initially considered the E-series, and specifically the B30E, from Bell Equipment as the machines featured all of the qualities we were looking for.  One of the key deciding factors for us was the B30E’s fuel efficiency, which was extremely favourable in comparison to equivalent machines from other manufacturers.  However, this did not detract from the power and reliability of the engine, which performed consistently – and continues to do so - helping to reduce downtime and increase productivity.

“The B30E also came with a number of features ‘as standard’, including Fleetm@tic® and the inclinometer, which, at the time, were not included on competitor machines,” adds Jason.

Fleetm@tic®, a satellite-based fleet management system that was first introduced on Bell ADTs in 2003, allows AFS to monitor machine productivity, utilisation and condition.  The on-board weighing function, which has been standard on Bell machines for over a decade, also provides accurate, detailed information to ensure efficiency is guaranteed with every load.

The B30E also benefits from an inclinometer as standard, which prevents tipping at various angles keeping both the driver, and any other operatives in the area, safe.

“Having these features as standard on all of our ADTs over the past four years has placed us in an extremely competitive position, being able to provide our customers with a unique offering.  Features, such as the inclinometer, also demonstrate our continued commitment to ensuring the safety of our drivers and our customers.

“The B30E has been an integral part of our fleet for four years, and I’m confident it will be there for the next four,” concludes Jason.

Nick Learoyd, Managing Director at Bell Equipment UK, says: “The B30E benefits from a long heritage of technological developments and is proving a popular option in our E-series range.  Its mid-size is practical, yet its low ground pressure allows it to work in areas where other trucks cannot reach.  Customers, including AFS, are also benefitting from the many ‘standard’ features that are included on the B30E, helping them to better manage their fleets and maximise productivity.

“We’re extremely pleased that AFS has chosen to add another B30E to its fleet.  It is a strong demonstration of their confidence in the Bell brand and the build quality of our ADTs.” 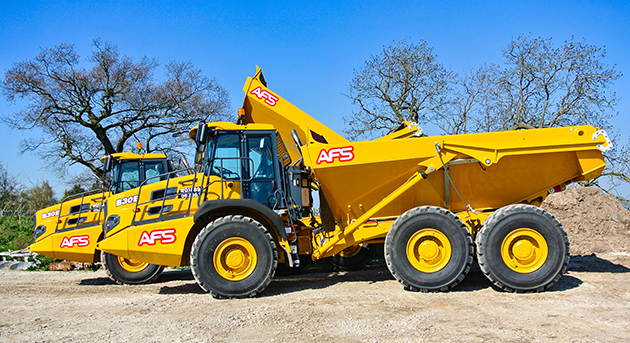