As the General Manager of the Belabela Quarries outside Gaborone in Botswana, Peter Zunckel has a slightly unusual problem. Every time he tries to convince his company’s board members that budgetary provision needs to be made for replacing his fleet of three Bell B30D Articulated Dump Trucks (ADTs), he gets told that there’s nothing wrong with the existing trucks. And this is despite the oldest of the three ADTs just surpassing the magical 30 000 hour mark!

Belabela Quarries had been founded by a private owner in 2003 after which it underwent sudden growth under corporate ownership. B&E International, a subsidiary company of the Raubex Group Limited, bought the business in 2015. Peter Zunckel had been the General Manager under previous owners and shares a lot of the history of the business.

The hard granite rock that is mined in the quarry’s 60m deep pit, is transformed into a large variety of building material that is hauled across the length and breadth of Botswana. The company produces various sizes and grades of concrete stone, road stone and gravel with crusher sand being the biggest seller.

“The previous owners had brought in three used Bell B40D ADTs which were eventually traded in when we bought the three new Bell B30D ADTs from Equipment Sales, which is now Kanu Equipment, Bell Equipment’s dealer in Botswana,” Peter says. “Our association with Kanu Equipment and Bell Equipment goes back even further as we had owned three Bell HD2045 Excavators and one HD1430 Excavator, which had served us very well.”

Belabela Quarries’ three Bell B30D ADTs were bought new in 2008 and, as mentioned, the older of the three had clocked just over 30 000 hours in early 2020 with the other two recording 29 700 and 27 300 hours respectively. “I motivated the purchase of these Bell B30D ADTs back when I was the Plant Manager here and our General Manager at the time, an accountant with not much plant or technical experience left the choice to me,” Peter explains. “We installed refurbished engines obtained through Kanu Equipment from Bell Equipment’s ReMan Programme in all three of the trucks when they had done 22 000 hours. Apart from some minor attention to other working parts, they have not been rebuilt at all, which is a true testimony to their excellence in design and build with proven longevity.”

The engines were replaced in the Kanu Equipment workshops in Gaborone on a staggered basis. Each truck took four to five days to complete and ancillary services, such as flushing the cooling and transmission systems, were included. Peter says they were very pleased with the deal they received from Bell Equipment through Kanu Equipment as this included a similar warranty as that on a new engine, which made for peace of mind.

The three Bell B30D ADTs are used to haul mined rock to the crusher over a distance of about 1km and when overburden is moved in the stripping process, waste stockpiles are about 3km away. The blasted material is loaded in-pit using a 50t excavator and the Bell B30D ADTs return average fuel burn of 17 litres an hour.

Molly Lekgwadi is one of two female ADT drivers at Belabela Quarries and has been for the past seven years. “I received my ADT training in South Africa but have been very happy driving these Bell B30D ADTs on the quarry here,” she tells us. “The truck is easy to operate with good visibility from the cab and the retarder and good brakes make it safe, even with full loads.”

Judging by the queues of customer and sub-contractor trucks lining the entrance to Belabela Quarries, their products are much sought after. Loading and dispatch are done only during daylight hours and one Bell L2706E and two Bell L2106E Wheeled Loaders are used for this. The machines also fulfil stockpiling, general material handling and housekeeping duties within the plant.

“These machines have proved themselves to be relentless workhorses,” Peter says. “They are fitted with standard size buckets and although the crushed granite rock has a specific gravity of around 1,4, the material is incredibly abrasive so we replace the ground-engaging tools on the buckets weekly.”

Now boasting over 12 200 and 7 700 hours respectively, the Bell L2106E Wheeled Loaders have been meticulously maintained. “There was a campaign on the Bell L2106E machines to swap out front axles with remanufactured axles from the Bell Equipment factory and here we have Kobus Bezuidenhout and his team from Kanu Equipment to thank for the efficient effort they put in to really minimise our downtime,” Peter adds. “The same can be said for when they overhauled the engine on our Bell L2706E Wheeled Loader on 15 000 hours when, through careful planning and adherence to a strict timeframe, they got the job done efficiently with the minimum amount of upheaval to our production. This machine is now fast heading for the 20 000 hour mark.”

Phutego Moseki first started work as a wheeled loader operator on a Bell L1806C machine in 2004. “I have really grown with the machines and now operating a Bell L2106E Wheeled Loader, I can tell you how much these machines have improved with smoother controls and ease of handling,” he says. “Working in these dry and dusty conditions, the reversible fan really helps to keep dust out and keep the machine cool and with more glass in the cab, all-round visibility means a safer operator experience.”

“When looking around our site, you’ll notice that equipment manufactured and sold by Bell Equipment through its local dealer Kanu Equipment, is pretty much in the majority here,” Peter says. “We also have a Bell 2306D Articulated Hauler which pulls an 18 000 litre water bowser, that were both bought used from Kanu Equipment. We use this for dust suppression on our haul roads and loading platforms.”

“Then too, we own a Finlay 683 Supertrak Screen which we bought new some years ago, before Bell Equipment and Kanu Equipment were the official agents for Southern Africa. This machine has been printing money for us and we’re delighted that our good friends at Kanu Equipment now carry the spares for it too.”

“While on the subject of spares and technical backup, I can tell you that Kanu Equipment’s parts holding from Bell Equipment is constantly improving and we appreciate the effort both companies put into ensuring that our yellow and red equipment fleet’s downtime is kept to a minimum by having the correct parts and service kits in stock.”

As in most constructive conversations, the last words should belong to a lady, as we hear from Junior Site Manager, Dimpho Motladiile who says: “Since I started work at Belabela Quarries in 2010, we’ve never been able to put the blame on loss of production on our equipment that comes from Bell Equipment as the technical support we receive from Kanu Equipment puts paid to any downtime as quickly as possible. They understand our business and the production pressures we face and always do their utmost to get our load and haulage machines back up and running quickly.” 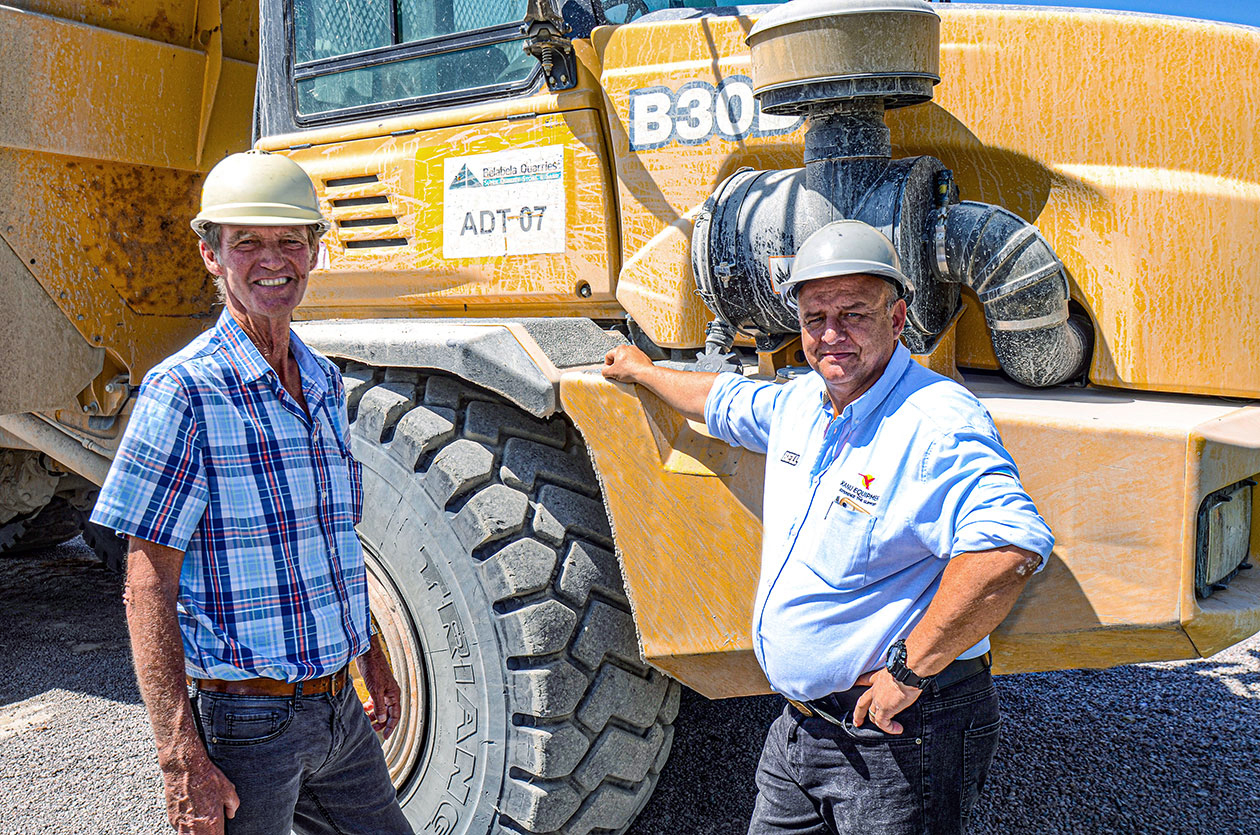