Lessons learnt early in life about perseverance and loyalty have stood Elvis Shabangu and his company, ES Forestry, in good stead when relying on one brand of timber handling and haulage equipment.

Some 16 years since the founding of this well-known Mpumalanga-based timber harvesting and haulage company, ES Forestry is still relying on Bell Equipment for the bulk of its mechanised fleet.

Elvis Shabangu didn’t have an easy childhood. He did odd jobs to support his single parent mother and his siblings and left school early to find work to continue this quest but hard work, dedication to the task and loyalties have paid off.
Since its founding in 2004, ES Forestry has made steady inroads in the Mpumalanga timber harvesting and haulage environment where it is now considered a major player.

We met with Elvis Shabangu and Steven Muller, his company’s General Manager of some eight years, at their Nkwazi base west of Nelspruit. Steven is a seasoned timber man with many years’ experience in silviculture and timber harvesting and haulage. The company had just been awarded a long-term contract for timber extraction and short and long haul to a nearby pulp and paper mill for a large international group. To this end, ES Forestry had once again turned to Bell Equipment to supply it with new equipment specifically for the fulfilment of this contract.

“Our company has grown up with Bell Equipment as its main supplier of timber handling and short haul equipment and we felt confident that Bell would once again give us the right tools for this exciting new contract,” Elvis says. “We were specific when choosing a Kobelco SK210 Excavator chassis that we had converted to a wheeled machine fitted with a Matriarch MT800 grab that offers us a 0,8 cubic metre capacity.”

“The reason for preferring a wheeled loader was manoeuvrability as we work in very hilly conditions and our roadside depots where the Kobelco SK210 machine will be used, are generally about 2 to 3km apart which is close enough for it to be driven there without the need for using a lowbed trailer. It will also be crossing some tar roads and by running on tyres it won’t damage the road surface.”

At the time of writing ES Forestry’s Kobelco SK210 wheeled loader had not yet been put into operation but both Elvis and Steven were keen for the machine’s operators to get used to its operating controls so that when that part of the contract commenced, the operators were well versed with its operation. The conversion to a wheeled loader had been done by the Matriarch division of Bell Equipment near Empangeni.

“On the short-haul side we have successfully run Bell T21D and T17D Timber Forwarders for a number of years and even have a Bell B25D Articulated Dump Truck that we converted to a Timber Forwarder,” says Steven. “We were understandably happy to hear of Bell Equipment’s new generation TF302E range when we started looking for short-haulage vehicles for this new contract and confidently ordered two such trucks which were delivered in July and August 2020.”

The Bell TF302E Timber Forwarders are fitted with Waratah CF8 onboard cranes and Matriarch 42LX timber grabs with a capacity of 0,42 cubic metres.

The area where the two Bell TF302E Timber Forwarders have been deployed is challenging to say the least. Timber is extracted from compartments on steep hills and the roadside depots and access roads are narrow. The first thing that any forestry owner and contractor alike would question would be how safe the haulage vehicles are in such an environment and on this score, both Elvis and Steven agree confidently.

“There’s been no need to modify these Bell TF302E Timber Forwarders in any way as they have been designed with CE and ISO standards in place already,” Steven explains. “We and our clients have been reassured that this truck’s ‘best in class’ braking system with its fail-to-safe park brake, Hill Assist and anti-rollback and above all superb retarder system that assists braking, all make for a very safe timber forwarder.”

“Our operators also report that the ergonomics of the cab and the swivelling seat are great, and we believe this should cause far less operator fatigue,” he adds. “What may seem like a small thing but innovative all the same is the sealed switch module next to the steering column to keep dust out of sensitive electronic components.”

ES Forestry’s Bell TF302E operators have also taken to the inclinometer which offers early warnings to possible instability under full loads. The truck’s 30 cubic metre bin volume is something that the operators have become used to as the older Bell T21 and T17 Timber Forwarders carry much the same volumes of timber cut to lengths that vary between 2,4 metres and 4,8 metres.

Fuel consumption, given the challenging terrain and the size of the loads, is deemed reasonable at 18 litres an hour.

ES Forestry’s loyalty to its OEM of choice, Bell Equipment, is without doubt as this new equipment joins a long list of other equipment built by and sold under licence by the Richards Bay-based company. This includes the aforementioned Bell Timber trucks, a John Deere 1910E Timber Forwarder, a John Deere 648L Grapple Skidder, a John Deere 640L Cable Skidder and no less than 25 Bell Loggers of which five are of the latest F-series. 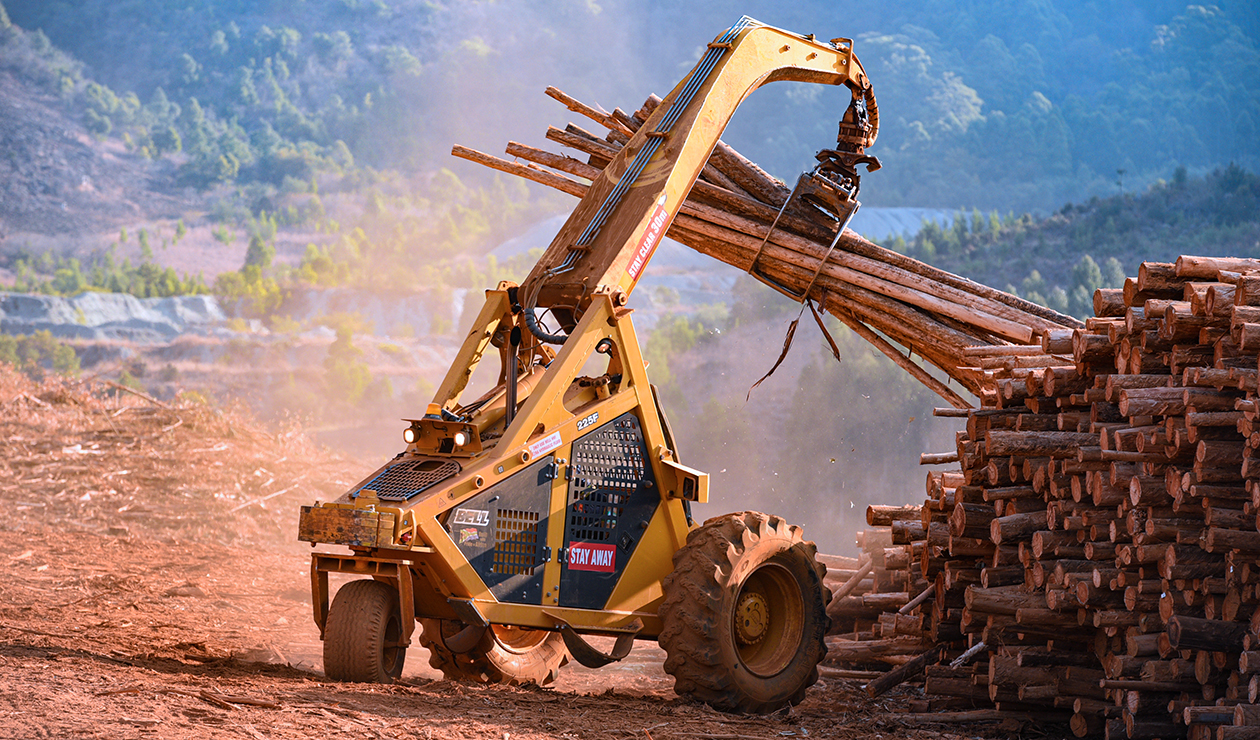