SiyaQhubeka has conducted an independent evaluation of Waratah’s new H215E Harvesting Head to compare productivity and quality with the company’s current equipment and methods in line with Mondi Forest’s objective of achieving a single pass for its harvesting operations to follow the standard set by the Brazilian forestry industry.

The H215E Head was fitted to a Kobelco SK210SK excavator carrier for the study to simultaneously give SiyaQhubeka an opportunity to trial one of the newest forestry carriers available in the Southern African market. Kobelco is the second largest seller of excavators in Japan and annually sells about 200 units into that country’s forestry sector alone.

In May the company held a harvesting field day in norther KwaZulu-Natal where they presented their findings to over thirty SiyaQhubeka and Mondi employees and contractors. Bell Equipment, the supplier of Waratah and Kobelco equipment in Southern Africa, was also invited to discuss the technical specifications of the equipment, which was working in a compartment adjacent to the presentation site. This gave the foresters an opportunity to view the equipment and compare the timber for themselves.

The study took place at SiyaQhubeka’s operations at Dukuduku and Kwambonambi in compartments of Eucalyptus GxU and aimed to compare the productivity and quality of the H215E head with that of Waratah’s HTH616C head that is used in the Kwambonambi operation.

The various methods of processing were tested, and the felled timber was laid out for direct comparison after an infield presentation that compared the results of the various methods. SiyaQubeka’s used compared a single pass versus a multi pass on both heads while recording productivity, roller damage to the trees and remaining bark.

Productivity increases ranged from as high as 29% in larger 0,3m Stem damage on the three pass treatments was noticeable.

When assessing timber quality, SiyaQhubeka Harvesting Forester, Minenhle Mdlalose, said they looked at surface damage and bark percentage. “We wanted to see if we can achieve the productivity we want to get and still be within the specs that the mill requires.”

By comparison, the H215E has four knives and two rollers similar to the heads used in Brazil. The log is held by the knives, which essentially do the debarking. This design prevents clogging of the bark and pushes the bark away from the log.

In conclusion, Harvesting Technical Manager of Mondi, John Eggers, encouraged foresters to work towards the single pass as “the next big thing”. He said adopting the reduced pass had shown benefits of increased production, lower costs and fibre yield optimisation through reduced log surface damage infield. These benefits could further be increases using the single pass.

Bell Equipment’s Forestry Specialist, Charles Inggs, said that the H215E would be moving to Mpumalanga where it would be working in different tree species to gather more information. He anticipates that strip-ability will reduce due to the colder winter conditions and give the company an even better indication of the head’s capabilities. 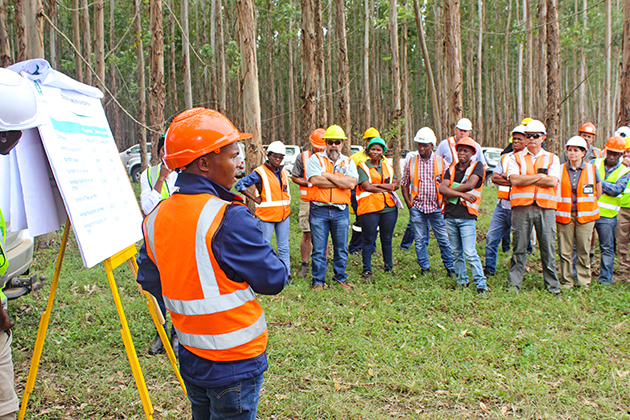 SiyaQhubeka Harvesting Forester, Sabelo Sithole, discusses the parameters that were taken into consideration when comparing Waratah’s H215E and HTH616C heads. 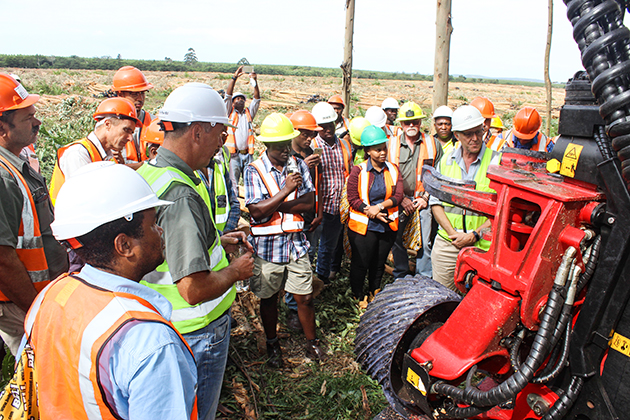 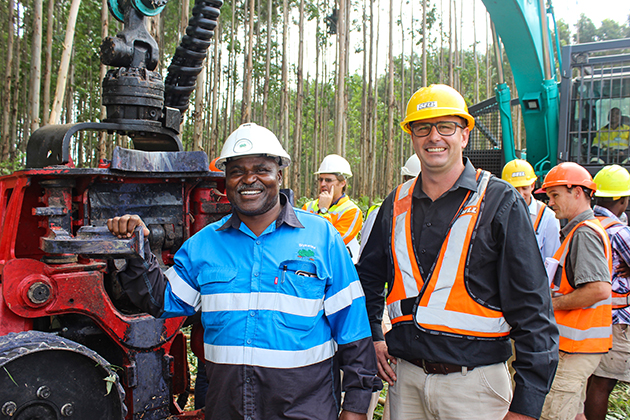 Joseph Zulu of Siyawisa Hlathi, the SiyaQhubeka contractor which took part in the study, discusses the Kobelco and Waratah combination with Bell Forestry Specialist, Charles Inggs